After the success of their first debut album last week, BLACKPINK is at it again making headlines with the release of their much-awaited Netflix documentary Light Up the Sky.

In this 79-minute film, the girls Jennie, Lisa, Jisoo, and Rosé open up about their personal and professional lives—from their childhood and their auditions for YG Entertainment down to their trainee years and world tour stories.

Here are some of the most interesting—and intriguing—things fans will discover about BLACKPINK exclusively through the docu!

1. Jennie, once a shy girl, grew up in a homestay in New Zealand

Why Jenny has always avoided questions about herself is that she used to be “super shy." She explains in the film, "I was one of those people where I can’t even order something on the phone. I hated that. It took me a while to get this far.”

In the docu, Jennie further talks about her childhood as an only child, recalling her years growing up in New Zealand by herself as an exchange student. It was such an experience, she stresses.

“Everything was up to you. Even if you’re 10, you still got to make your own decisions. that was very important to me to have at a young age. That built me as who I am right now.”

2. Lisa's mom knew about her talent since the beginning

Music and performing always found itself in Lisa's blood. It was so much so that her aunt, also a part of a music group, would always let Lisa play with their mic.

“That’s how my mom knew I loved dancing,” the rapper-dancer reveals in the film.

Lisa recalls her mom eventually signing her up in many dance competitions in her early teenage years—until she finally got the chance to audition for YG in Thailand.

Moving to Korea as a Thai girl was something big for the then 14-year old, she muses. “When I went to Korea without Mom, I felt that i had to take care of myself now.”

Lisa didn't know how to speak the language. She was clueless about the culture, only managing to survive through the help of her co-trainee Jennie.

“Fortunately there was Jennie. She was the only one who can speak English among the trainees,” Lisa enthuses.

The film shows the girl group's unnie sitting in her makeup chair, giving her artist an anecdote from her childhood.

"When I was younger my relatives treated me like an outcast because I was ugly. They called me monkey.”

The Gyeonggi-do native then shares her past dreams of becoming a writer or painter, before joining the drama club in 11th grade to pursue acting. The detour, she says, eventually led her to her passion in music.

Jisso remembers auditioning for YG, “It felt like something far removed from me. I never thought I’d actually be doing it for real."

4. Rosé's dad convinced her to audition

Like Jennie, Rosé grew up in a foreign country. She was born in New Zealand and only moved to Australia at 8.

In the film, Rosé recalls herself being the resident Korean girl who went to church every Sunday and the average Australian kid who went to school with her Korean friends. “I think I enjoyed having two lives. Kind of like Hannah Montana!” she gushes.

When YG went to Australia, Rosé's dad was the one who convinced her to audition. Although hesitant at first, it was her dad who reminded her about living in regret if she didn't get to try out.

And so when she got the call back, the then 16-year-old Rosé had to move to Korea to train.

“My whole life changed—I dropped out of school, I had never even imagined myself living apart from my family,” she narrates.

BLACKPINK breaks record at no. 2 on Billboard 200, UK Albums Chart

5. Lisa and Rosé started as 'rivals' and ended up as BFFs!

Lisa and Rosé, in their younger days as trainees, thought they were each other's competition.

"I was like, ‘Oh! A new girl,'" Lisa reveals in the docu. “Everything was gyeongjaeng at that time."

Rosé follows, “She thought I was competition and I was just really intimidated. Like everybody is so good."

The two eventually got past the rivalry and became good friends.

“We were the same age, and we had similar tastes. Since we both came from another country, we relied on each other when we were having a hard time. We become like two peas in a pod. We were like genuine twins,” Lisa shares.

Rosé agrees, “We have so many days where we walk out, and we’re wearing the same thing." 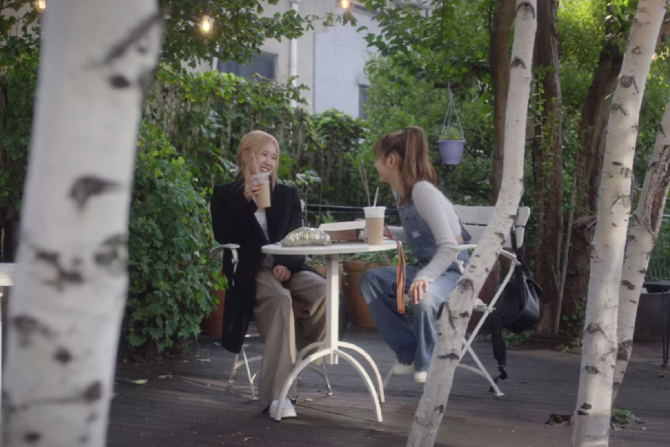 6. Each one of them had thoughts of giving up

It's no secret that training to be a Korean pop star entailed labor and time—it could even take years before one's debut! Case in point: It took six years for Jennie to train, five for Jisoo and Lisa, and four for Rosé.

In the docu, the girls reveal they had to live in a dorm-like apartment together as they took several lessons each day. They also had to create performances that were to be graded by their bosses and producers every month, and follow strict rules even as detailed as not being allowed to drink alcohol, smoke, or get a tattoo.

As teenagers then, the group says, it was a lot to take in.

“Being told that I’m not good at stuff face-to-face and trying to keep everything together when I hear those things," Jennie says. "It’s really harsh.”

Still, the girls were determined to hold on to their slots in the group of trainees. The harder it was, as they all concur, the more motivated they became.

“I knew i could do it. The tougher they treated me, I’m like, ‘I’m gonna get through it and I’m gonna show them that I’m worth it,’” Jennie recalls the experience.

"I had to keep fighting. I had to give it my all. ‘I don’t care how long the training will take. Bring it on! I don’t care about that anymore!’” Lisa adds.

“After all of this (hard work), I’m not gonna go back without doing anything," a competitive Rosé says. "That would be embarrassing for me.”

BLACKPINK's record producer Teddy Park attests to the fire she saw from the group early on, “At such young age, they were able to absorb all the techniques and the tools that they need for the next 10 years.”

7. Whistle almost didn't make it as their debut song

In the film, BLACKPINK finds themselves in the studio with their producer Teddy. All of whom candidly recall the group's many firsts—including their first debut single Whistle.

“Too many people thought it was risky. ‘Cause it has this weird country vibe to it, and it’s super minimal. iI just sounded too empty for a lot of people," Teddy says.

But the group, as everyone knows, just went with the song anyway.

In the end, Whistle topped the hits as the group became number 1 only 14 days after their debut. It was the shortest time ever by a girl group to reach the spot!

8. Rosé is coming up with a solo song

In one scene, Rosé is vocalizing at the studio with another producer. She herself has “always been so afraid of getting in the studio or writing something,” she expounds, but had to just start doing it to get over it.

When it comes to the craft, Rosé says not wanting to "be just like another girl who sings and just kind of tells everybody that she writes music.”

Teddy supports this artistry in the young lady saying, “When it comes to writing songs, Rosé has certain stories in mind. And she’s shy about sharing that story. It’s just super personal to her. It’s like her diary.”

What's revealed later on in the film: Rose recording her first solo single!