Style Living Self Celebrity Geeky News and Views
In the Paper Shop Hello! Create with us
Isip Kwago

Very few things can bring a Metro Manila resident to the South: a family reunion, a lover’s excursion, an important errand. In my case, I found myself in the food court of Molito Lifestyle Center in Alabang on an early Saturday morning: a place I had never been, surrounded by people I have never met – all in pursuit of a good conversation at the Away from Keyboard Book Fair.

AFK positioned itself as an intimate, no-phones-allowed gathering of creatives, both in practice and theory, to celebrate alternative publishing and print and the communities that sustain them. The two-day event that took place last September 17 and 18 was packed with performances, interactive programs, and exhibitions that promote reading: something that Kwago, the publishing lab that organized this affair, is not exactly new to.

Mainstays in the local art scene may remember the collective’s several similar pop-ups in Maginhawa but this is their first one in a new place and their first one since COVID struck. The pressure to live up to their promise hung heavily in the air, especially given the state of online discourse.

It goes without saying that social media only ever oscillates between context collapse, clout-chasing, and condescension. Everything we say or do can be collected and presented as evidence at some virtual court of law; this holds true in sociopolitical discourse or even in former safe spaces like fandom. We’re the most connected we’ve ever been yet we’ve never been more alone, obviously because communities aren’t meant to flourish in such conditions.

And yet, we remain slaves to our phones, mainly because they’re so embedded into our routines and reward systems. AFK co-organizer and Kwago resident artist Christine Chung told me about a study that shows we tap our screens approximately 2,617 times each day – sometimes, for no reason at all. Rachel Saslow writes in Vox: “The emotional component is something we don’t give enough attention to. Reaching for our phones is an efficient way to not feel unpleasant emotions. Remember how boring and socially awkward it was to ride an elevator before smartphones?”

Like any bad habit that needs to be nipped in the bud, the key is to eliminate the source. AFK acknowledged this truism and created a space meant to foster connection in its rawest form: cut off from the rest of the world in more ways than one. Hosted in the structure’s outdoors veranda, the venue boasted their lack of a WiFi connection and invited attendees to sit down on the floor, facing one another at communal tables.

Visitors were surrounded by a sea of merchants selling everything from stickers and zines, to clay earrings and tarot cards. And of course, books. Lots of them – both secondhand and brand new, with an assortment of characters we know from TikTok or remember from childhood. The best part is those manning the booths were willing to stop what they were doing for a chat, without any expectations of professionalism serving as a barrier.

I got a Devotion cocktail from SSPACE Cafe’s pop-up Book Bar, where founder Alyssa Africa shared that the deceptively creamy cold brew with a stab of marula fruit was inspired by the feeling of Patti Smith’s book of the same name: bold and tender. I learned from Tipolo Books owner Kay Gemzon that the seamstress of their padded book sleeves once sewed and repaired school uniforms. I told Mara of Makò Micro-Press that their zine on police abolition prompted me to write an article on the same topic and we gushed over each other’s work for 10 minutes straight before I returned to my seat with a smile.

Founders of Makò Micro-Press and Agham soon stepped on the makeshift stage in front to share the realities of self-publishing and the necessity of community care in the face of state-sponsored attacks. Representatives from SAKA also talked about their experience as peasant advocates as a complement to their exhibit of portraits from the grassroots. The speakers were so physically close to the audience we were practically a part of their talks – and true enough, the people around me often chimed in, echoed their sentiments, and raised their fists in the air.

This is something that has also noticeably died in virtual exchanges, especially during pandemic times. Emoji reactions or encouraging messages in the chat don’t hold a candle to the real thing. You can’t tap someone in the call on the shoulder and ask them what they think of what the speaker just said: you don’t even have your camera on most of the time. As a result, the past two years have stunted our social skills, leaving us ill-equipped to carry ourselves through basic interactions. 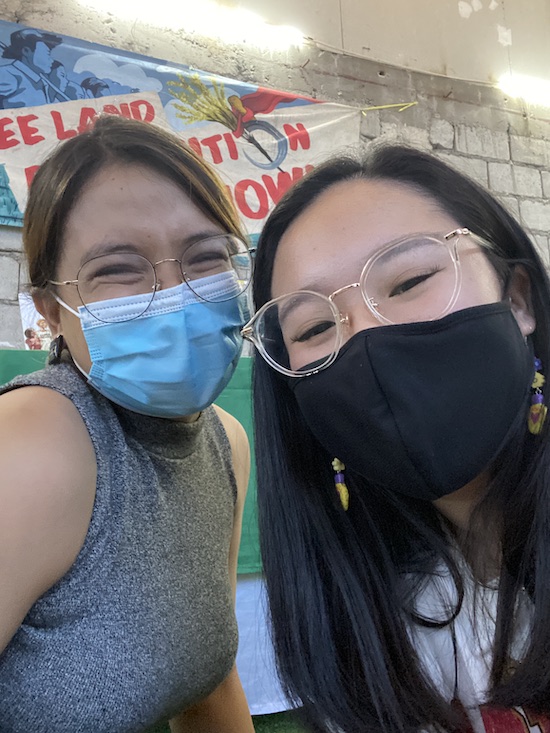 So when a complete stranger named Ianne offered to share her seat with me or when I unexpectedly ran into my internet friend Bianca, my initial reaction was to freeze up. But it’s like everyone around me understood the assignment: that being in that space entailed a willingness to be friends with everyone, to be bound to them by virtue of our common beliefs. I eventually chatted with Ianne on all things college and career and followed her on Instagram before she went home; Bianca ran me through her thesis proposal and picked my brain on the latest edition of The New York Times. By the end of the day, I was laughing not out of nervousness but out of sheer joy.

Social media has taught me to constantly brace myself for backlash: to mentally prepare a list of counterarguments before I even hit send and to delete as fast as I can the moment a contradicting opinion is in my notifications. It’s flattened actual people into pixels, with valid feelings we are free to ignore. After all, it can be harder to respect someone when we can’t see them or understand their point of view if they can’t tell if we’re listening. So we think the only choice is to retreat into isolation.

But events like AFK are a welcome reminder that long before we had phones in hand, we humans were always hardwired to look after and learn from one another. I’ve forgotten how easy it can be to talk to strangers (granted, of course, that they have good intentions); how willing others could be to take time out of their day and give a recommendation or compliment an outfit or tell one hell of a good story. We may live in a cruel, internet-powered world but we shouldn’t let it take away the kindness that has always been at our core.

MIBF 2022: What to expect in the Manila International Book Fair's on-site return to SMX

Angel Martinez is a cultural critic and social trendspotter with a degree in Communications Technology Management from Ateneo de Manila University. Her essays on the internet, identity, and their intersections have been featured in VICE, i-D, Rappler, CNN Philippines, and Esquire Philippines. When she's not knee-deep in the written word, she enjoys reciting the entire press conference scene from Notting Hill and cuddling with the two best dogs in the world.