Chadwick Boseman passed away this morning at 43 after a four-year battle with colon cancer.

The news came as a shock to everyone, especially for fans and peers who were mostly not aware of the extremely private Black Pantherstar's past medical history. Tributes from his co-stars have started pouring in as everyone tries to cope with the loss of a man who was at the peak of his career. Boseman lead one of Marvel's most significant films in the production house's history and King T'Challa will forever be remembered not only for the character, but for what he symbolized to millions of Black youths and the oppressed around the world.

Our hearts are broken and our thoughts are with Chadwick Boseman’s family. Your legacy will live on forever. Rest In Peace. 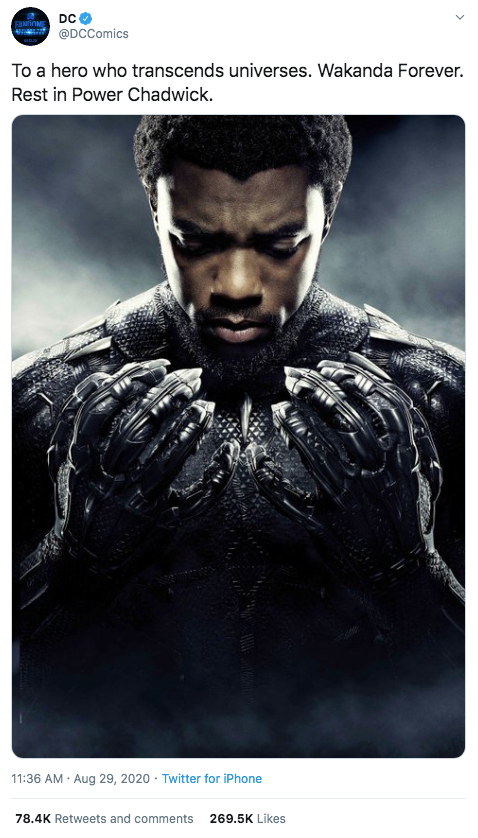 Mr. Boseman leveled the playing field while fighting for his life... That’s heroism... I’ll remember the good times, the laughter, and the way he changed the game... #chadwickforever 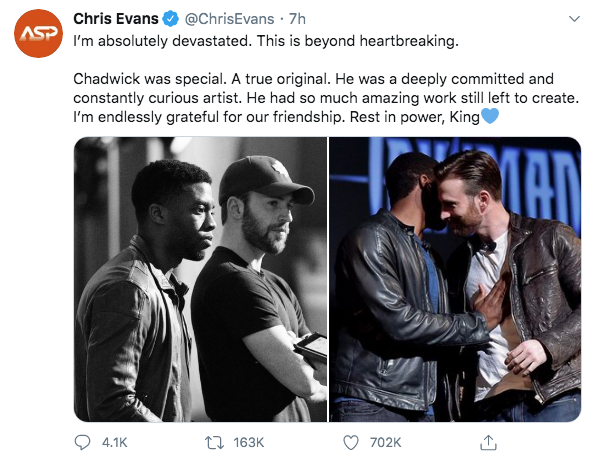 Wonder Woman's Gal Gadot expressed her shock at the news.

I’m so shocked and sad.. RIP Chadwick ??? I’m sending my condolences to all the family..

My prayers go out to Chadwick’s family and loved ones. The world will miss his tremendous talent. God rest his soul. #wakandaforever

X-Menstar Olivia Munn: "What a gift this man was. Thank you for making the world so much brighter."

Damn. Incredibly heartbreaking. What a gift this man was. Thank you for making the world so much brighter. Rest in love, @chadwickboseman ❤️❤️❤️❤️⛅️

Elizabeth Henstridge from Agents of S.H.I.E.L.D.:

@chadwickboseman this world will miss you so much. A superhero. A King. RIP. ❤️

Karen Gillan from Guardians of the Galaxy.

All I have to say is the tragedies amassing this year have only been made more profound by the loss of @chadwickboseman. What a man, and what an immense talent. Brother, you were one of the all time greats and your greatness was only beginning. Lord, love ya. Rest in power, King.

An outpouring of grief can be seen on Twitter as fans and celebrities share their memories of Boseman. 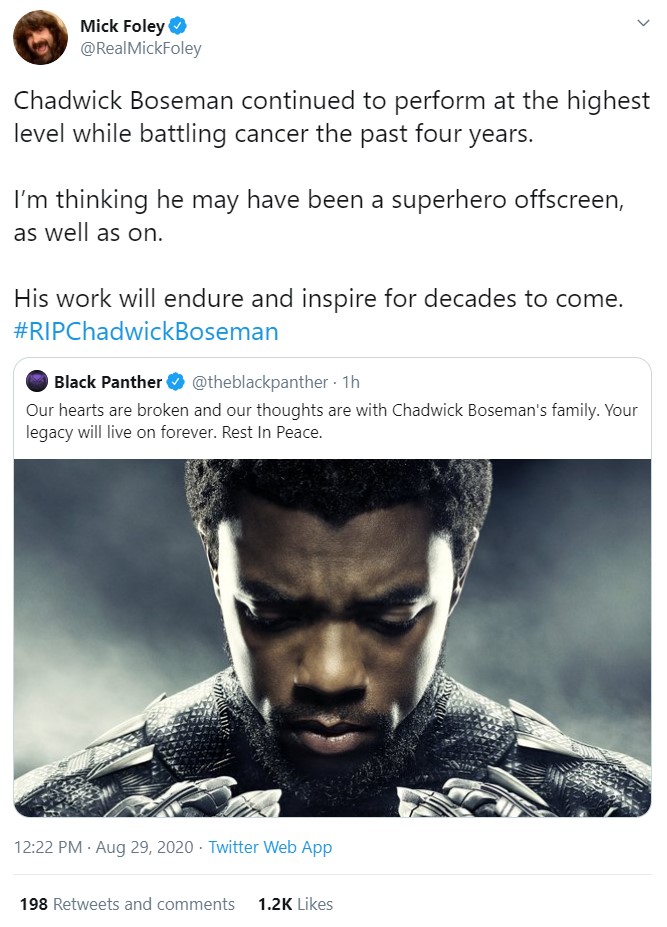 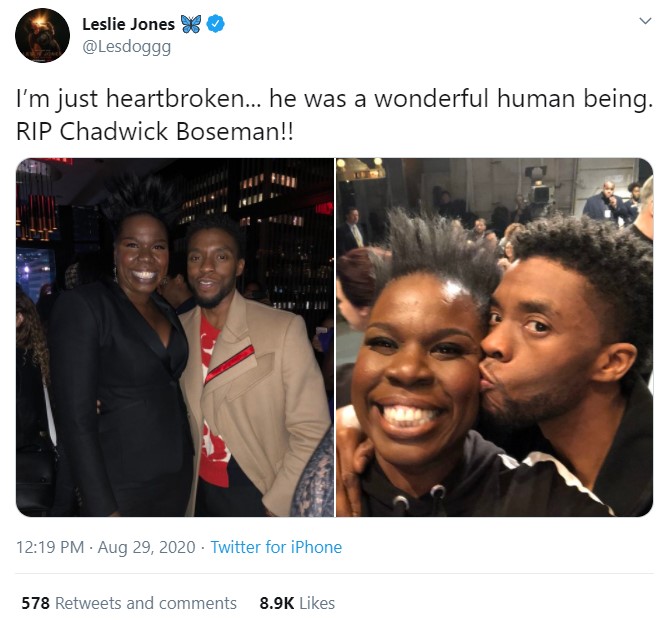 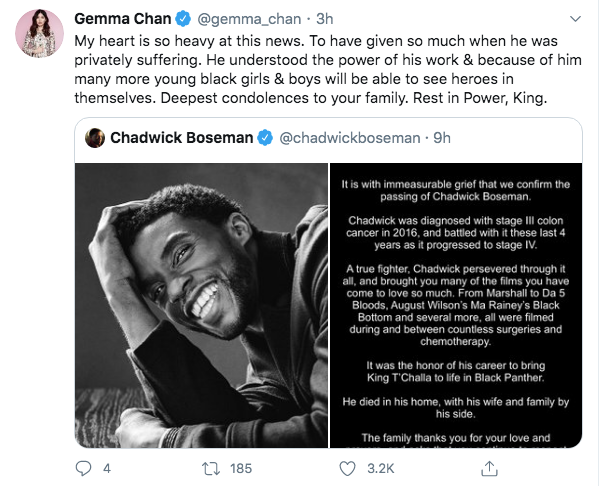 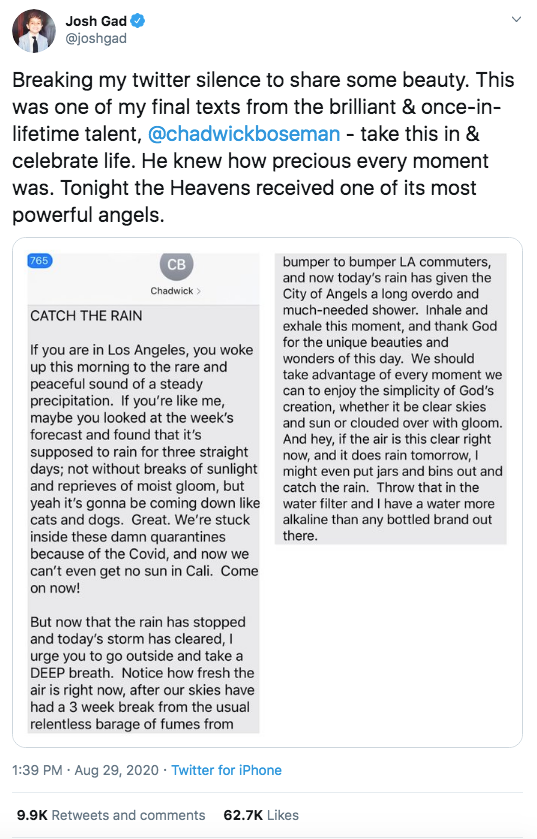 Marvel co-star Don Cheadle tweeted out: "i will miss you, birthday brother. you were always light and love to me. my god ..." 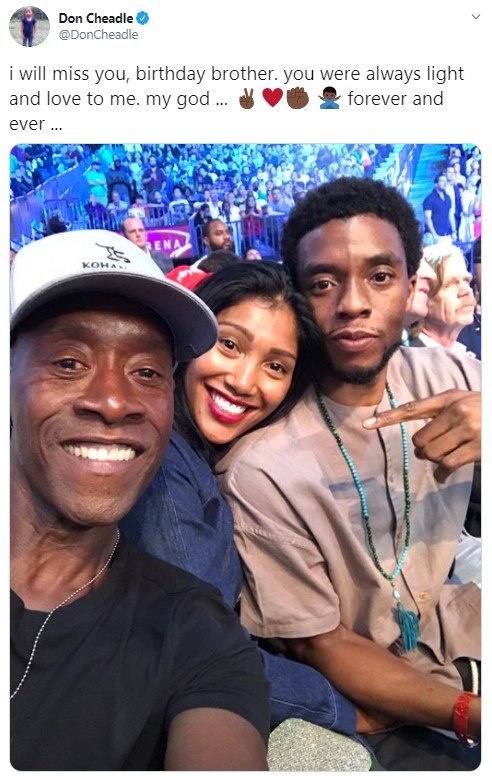 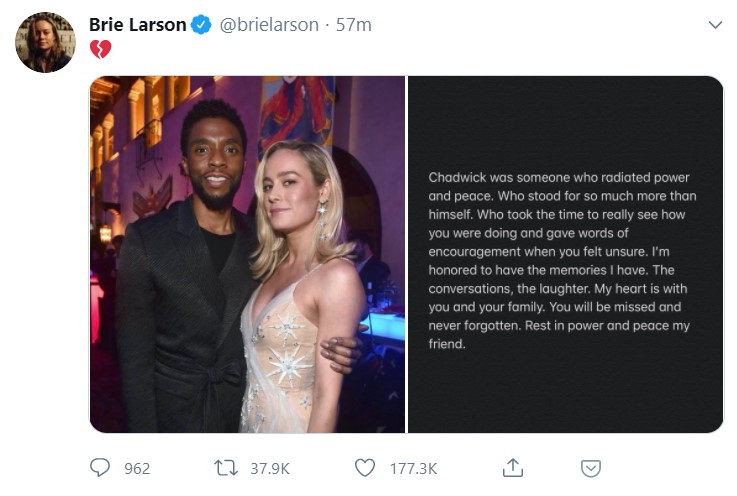 Marvel parent Disney tweeted out their condolences as well as other companies that were fortunate to have worked with him over the years. 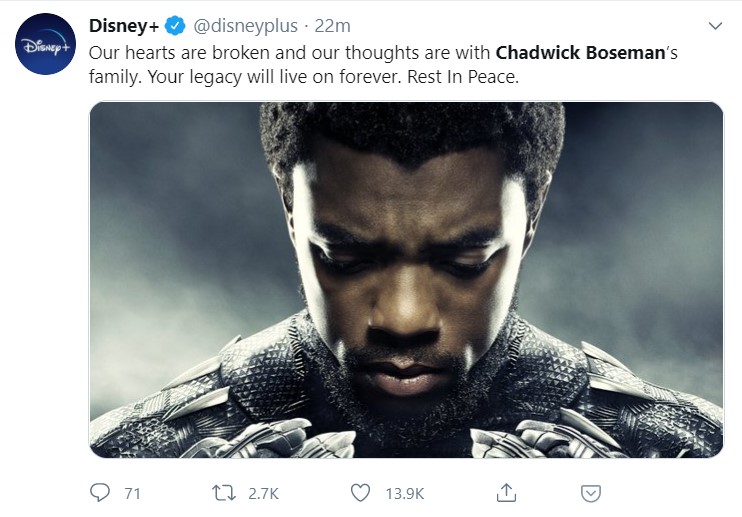 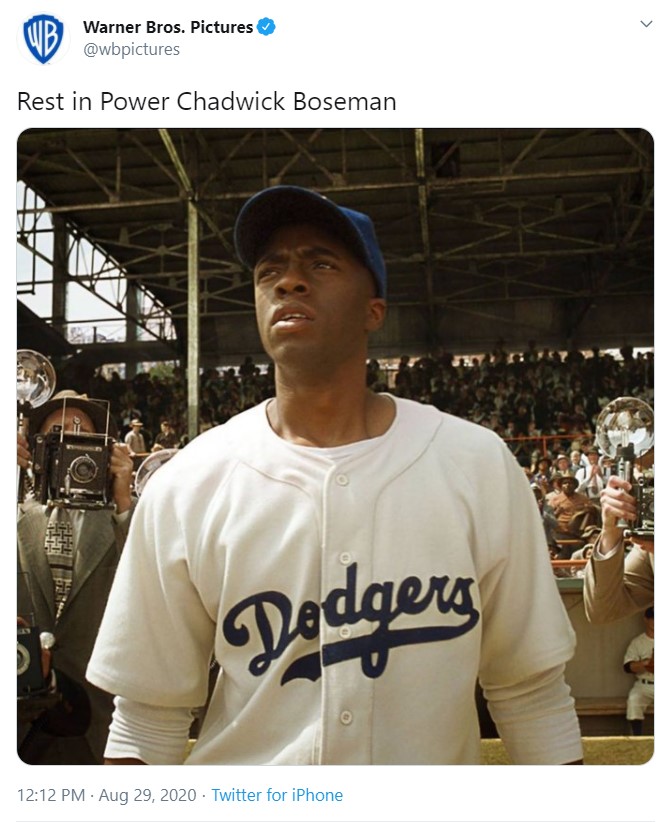 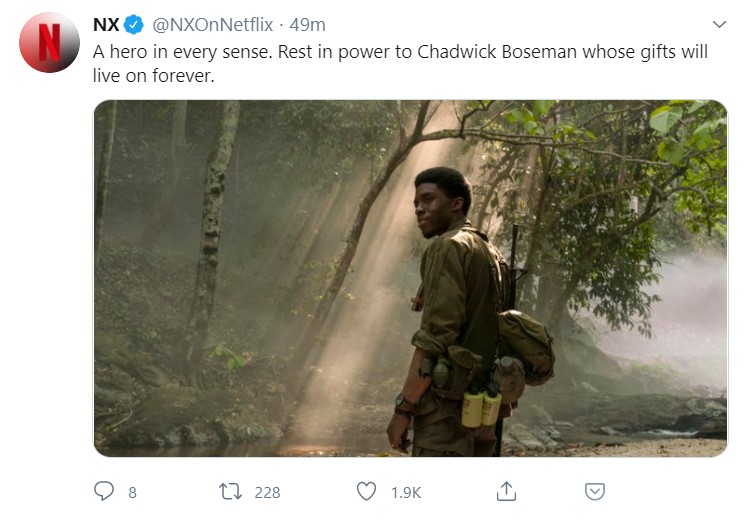 And fans have offered their condolences.

The ancestors have called him home. #RIP Chadwick Boseman. #WakandaForever

“In my culture, death is not the end” ?? - @ChadwickBoseman passed away at 42. Rest in Power King! ??️ - #ChadwickBoseman #WakandaForever #BlackPanther

LONG LIVE THE KING OF #WAKANDA!! This movie impacted my life more than I could Express in a post. I even researched on the main characters and discovered what an amazing person you were. I was honestly looking forward to seeing you in the sequel. #restinpeacechadwickboseman #wakandaforever 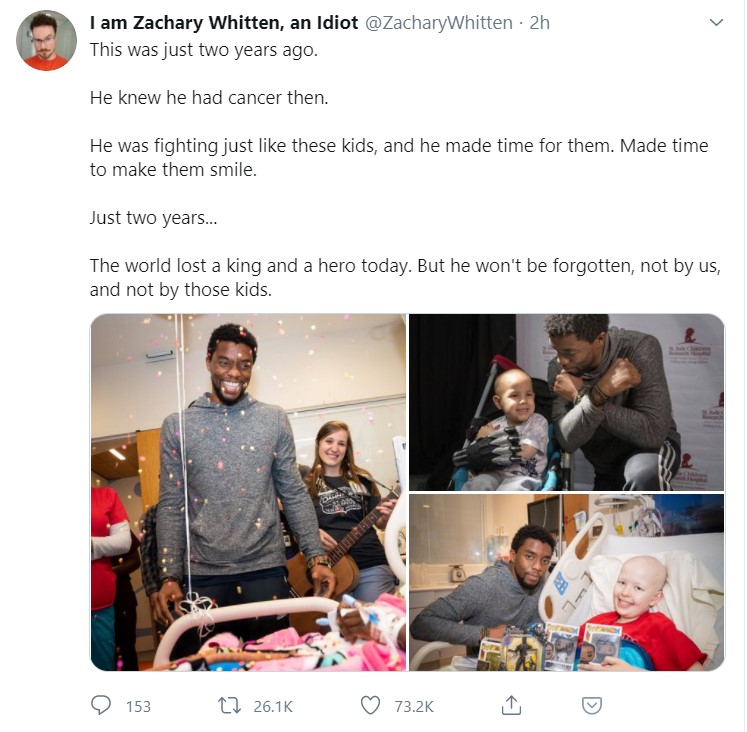 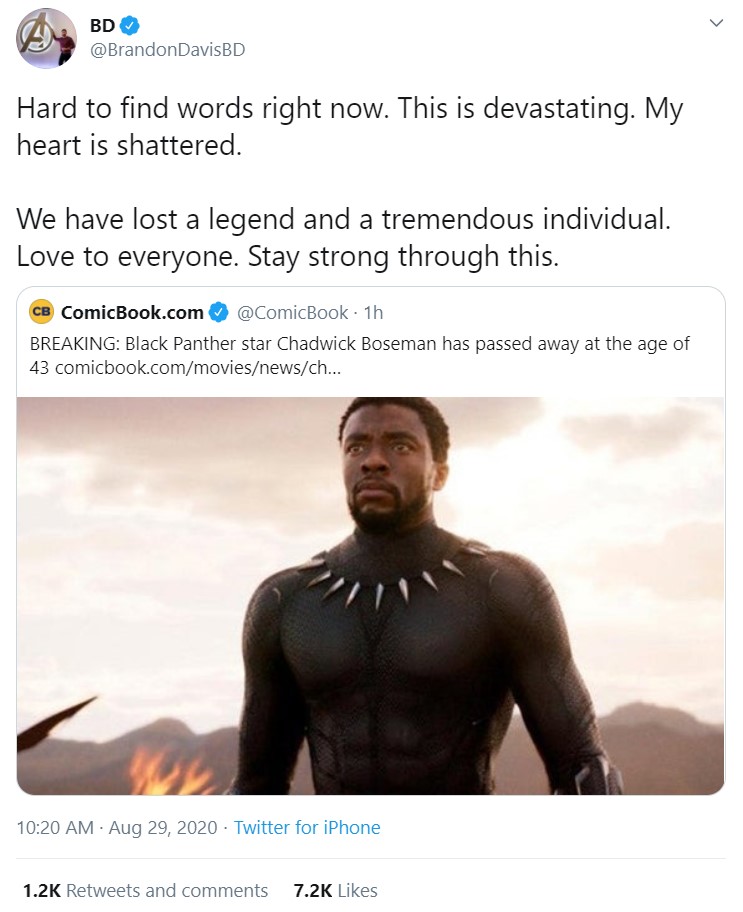 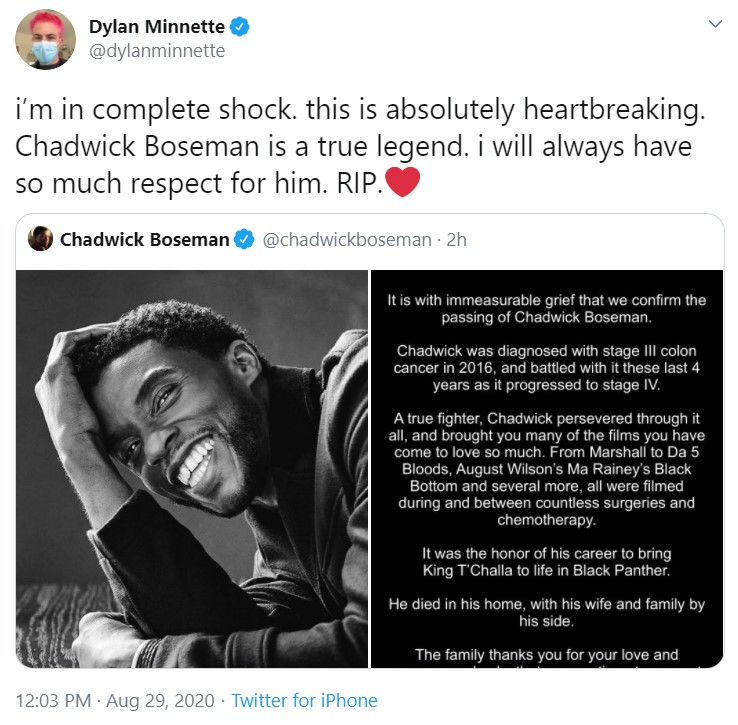