Style Living Self Celebrity Geeky News and Views
In the Paper Shop Hello! Create with us
Devsisters Corporation

BTS ARMY are no strangers to mobile games. Fans have come to anticipate at least two game releases or collaborations every year.

Just last June, the global superstars released BTS Island: In The SEOM, a game where they were very hands-on in with the development. Up to this day, this remains a source of joy and entertainment for ARMYs everywhere because of the presence of inside jokes that fans can relate to.

'BTS Island: In the SEOM': What you need to know about the new BTS video game

Cookie Run: Kingdom, a free-to-play RPG and city builder hybrid originally released by South Korean developer Devsisters Corporation in 2021, recently collaborated with BTS much to the delight of ARMY and non-fans alike. Since the game's official launch on October 13 (just in time for member Jimin’s birthday and the memorable BTS Yet To Come concert in Busan), the action role-playing game has managed to keep me up all night.

Compared to other BTS-related games, one needs determination and patience in playing Cookie Run: Kingdom. Why? Because you will need to interact with other cookie characters and build up progress with the gacha mechanics before you get to play the much awaited Rhythm Stage. 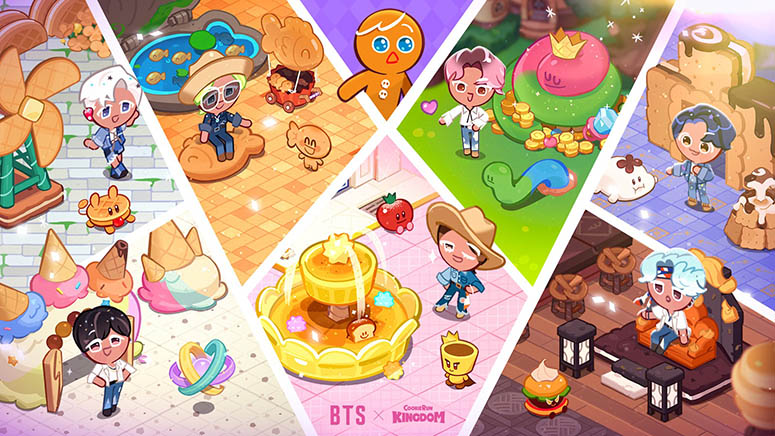 In case you were wondering, their favorite desserts include Bungeo-ppang (a fish-shaped pastry stuffed with red bean paste) for RM, Sour Jellies for Jin, Hotteok (Korean sweet pancakes) for SUGA, Croffles for j-hope, Cheese Balls for Jimin, Crème brulee for V and S’mores for Jung Kook. All the BTS Cookies have the special “ARMY’s Wishes” skill.

According to the skill description, BTS Cookies are safeguarded and vulnerable to enemy attacks. Players can use the skill for periodic healing and a buff providing immunity to Stun and increased Debuff Resist for the entire team. For example, when in a battle and a certain member of the team is suffering, using the powers of the BTS Cookies will help the team acquire additional HP Shield and a DMG Resist buff. The BTS Cookies are safeguarded and cannot be attacked or defeated by enemies. Despite this special skill, the over-all result of the battle won’t be affected. If all the other cookies have fallen, the battle ends automatically. You can also just place one safeguarded BTS Cookie on your team.

I’m quite sure that most of the ARMYs who downloaded this game did so because of the BTS Concert Stage!

The BTS Rhythm Stage is divided into two sections: Rhythm and Battle.

In the Rhythm Stage, players can obtain the crossover currency “Army Bombs” used in the crossover gacha. Concert tickets are required to play the Rhythm Stage which you can acquire by buying one of the packages or by simply waiting in to recharge with time. In order for you to play this stage, you must acquire at least one BTS Cookie. You can play all seven of them though once you acquire all members.

As of this writing, the hit singles Dynamite, Butter, Mic Drop, Mikrokosmos and Permission To Dance are included in the game

For the Battle Stage, you will encounter a villain group named B.A.D. 4 who will sabotage the concert. With the help of other citizens of the Cookie Run Kingdom, they several battles must be surpassed in order to play more songs in the future. One must also play in other kingdoms in order to acquire more power.

BTS are known for their signature fashion looks and hairstyles in their music videos. In the game, there are 21 available special rarity costumes that are inspired by their music videos for Butter, Permission to Dance and Mic Drop. By default, they’re wearing their Dynamite outfits.

You can decorate your Kingdom with new BTS-themed decors which were designed by the members themselves. Some of the items are also inspired by their music videos.

Here are the BTS-Themed Decors:

One can obtain these decors through the BTS crossover gacha and Mileage Shop. You can also purchase BTS tile decors by using the Army Bombs as currency. Keep in mind that there are certain BTS Decors that produce “Army Bomb” during the crossover. You may also drag your favorite BTS Cookie member in these selected special decors and they will sing and dance for you!

What makes the game fun

Apart from the cute BTS Cookies, the other characters in the game led by Ginger Brave have their own unique characteristics that make them lovable too. I just love the concept of cookies helping fellow cookies despite their differences. If only we can apply that in real life!

The Rhythm Stage is different compared to the other BTS/HYBE game called Rhythm Hive. The BTS Cookie/Cookies must avoid obstacles and collect ARMY Bombs while running in the game. I even thought that it would’ve been better if they added the songs ‘Run’ and ‘Run BTS’ for this! By the chorus part, it will switch to Performance Mode where players have to tap notes in sync with the featured song with different levels of difficulty. During my initial download, I encountered a number of bugs in this stage and ended up having to delete and reinstall the app again to progress in the game.

There are a number of BTS crossover events where players can earn rewards and make fantastic memories with the BTS Cookies. You will also be encouraged to participate more because they give out BTS Tour Daily Gifts where you can claim important items for free. There’s the Map of the Kingdom Tour Stamp Event where you get rewards when you complete missions and earn stamps. You will get the chance to receive the “Purple Stage of Fantastic Memories” décor. If you collect all stamps, the final reward is an Ancient or Legendary Cookie of your choice!

BTS fans know that the boys love developing characters and stories. They never fail to entertain the players with the backstories of their own Kingdoms inspired by their favorite desserts, which reflect their personalities. However, you can only unlock and listen to the full storyline once you acquire their character in the game. The overall aesthetic of the game is very cute, colorful and cartoonish, and both kids and adults can appreciate the child-like approach. Kyeopta realness!

The BTS Cookies characters are not limited to the BTS event. They are encouraged to interact with other cookies by helping in decoration, building houses, go on Bear Jelly Balloon expeditions and so on. I’ve been using my Jin Cookie and Jung Kook Cookie in the world exploration, Kingdom Arena, Guild Battles and other friendly battles.

So, do I encourage you to play this game? Yes. I love the flexibility and the options offered by this game. I am also starting to embrace the other cookies my Jin Cookie and Jung Kook Cookie go on a battle with (I only have two BTS Cookies so far). I might even still play this game once the collaboration ends.

If you’re looking for a non-violent game with cute characters, engaging storyline and BTS music, this one is just for you!