Here's your incentive for never throwing anything away.

In today's digital world, everything is stored in a server somewhere, be it e-books, movies, music or video games. However, back in the day, entertainment media such as video games were physically available as game cartridges. And we're finding out right now how valuable physical media can be, especially if it came from everyone's favorite decade: the '80s. 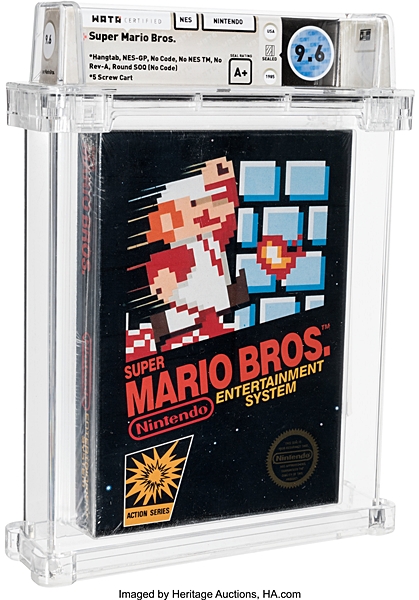 The sale has made the rectanglular plastic game cartridge, which stars the world's most famous Italian plumber, the most expensive video game ever sold. Since it's still sealed inside its original cardboard box, no one is certain if you need to blow on the pins for the game to work.

The description on the auction site's item page let's you in on the significance of this particular copy of the game, which has now broken the previous record by four times set by a similar copy of Super Mario Bros. which sold for $114,000 (P5.53 million) in July 2020.

"Not only is this the finest plastic-sealed copy with a perforated cardboard hangtab we've ever offered of any black box title, it is also the oldest sealed copy of Super Mario Bros. we've ever had the opportunity to offer," said Heritage Auctions.

"This is only the fourth version of Super Mario Bros. ever produced, and its window of production was remarkably short. Just to paint a better picture of how short this really was—the nationwide release for the console came in mid to late 1986, and black box games distributed for that release did not have the "Game Pak NES-GP" code. It's worth mentioning that Nintendo managed to add the trademark symbol to the Nintendo Entertainment System on their game boxes by the beginning of 1987. That certainly doesn't leave much time at all for this variant to be produced in-between the two!," the company explained.

Super Mario Bros. is a platformer game originally released for the Famicom home video game console in Japan in 1985, and for the North American version of the game console—the Nintendo Entertainment System—later that same year in limited quantities before mass release in late 1986. It is highly regarded as one of the best video games ever created, and is credited for reviving the video game industry after the crash of 1983.

(Images from Heritage Auctions at comics.ha.com)