Taylor Swift has set her fans up for a treat (yet again) when she revealed that she’s releasing her first re-recorded album, Fearless (Taylor’s version), this year. And fans were quick to find several easter eggs the superstar apparently dropped.

On Feb. 11, Swift announced on social media that the updated version of her 2008 album is coming out soon. “It has 26 songs including 6 never before released songs from the vault,” she said.

What got Swifties even more thrilled is the “code” Swift left on her note that they would usually figure out using the capitalized letters on the lyric books of her previous albums.

"when I think bAck on the fearless album and all that you turned into, a completely involuntary smile creeps across my face," Swift wrote. "this was the musical era in which so many inside jokes were created between us, so many hugs exchanged and hands touched, so many unbreakable bonds formed."

"so before anything else, let me just say that it was a real honor to get to be a teenager alongside you," she continued. "and for those of you I've come to know more recently than 2008, I am ecstatic that I'll get to exPerience a bit of that feeling with you in the very near future, now that I can fully appreciate it in its whimsical, effervescent, chaotic entirety."

Swift capitalized the letters A-P-R-I-L, as well as N-I-N-T-H, which fans speculated to be the launch date of her upcoming album. Swift confirmed it later on her website.

Eagle-eyed Swifties also took notice of the shirt Swift is wearing on the cover of her re-recorded album. It appears to be the same as what her “Romeo” donned in the music video of her hit song “Love Story” released in 2009. 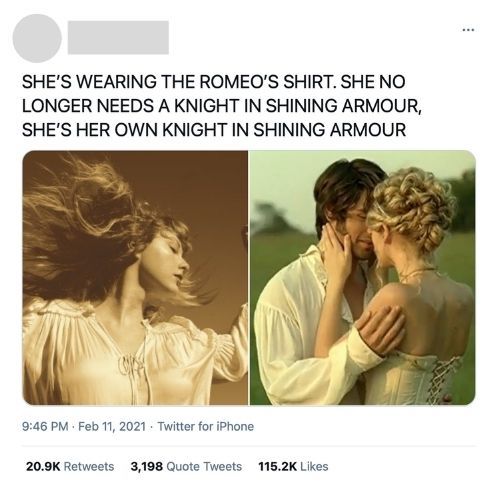 Another Swiftie also shared how much she could relate to Swift's seemingly hidden message. "The first time I listened to Taylor's love story was in 7th or 8th grade was it? Very much naive, made me relive my fairytale loving phase and sh it. The re-recording and the way she's now the one wearing Romeo's shirt because Juliet needs no man to feel complete, speaks to me," the tweet said. 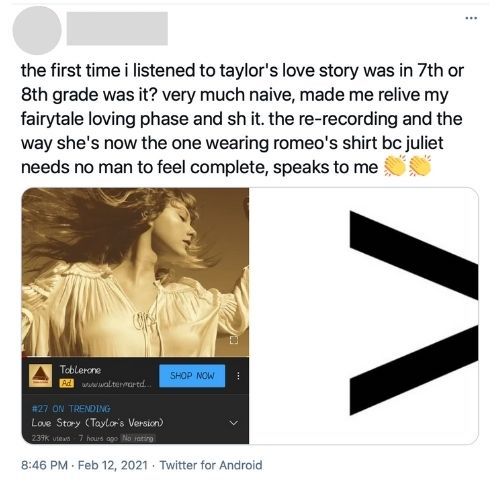 Aside from the news of her upcoming album, Swift delighted her fans when she unveiled the re-recorded version of “Love Story” on Feb. 12. Unlike the song’s 2009 music video that featured a damsel-in-distress story, this year’s rendition highlighted the moments the superstar spent with her fans in the past years. “With love to all of my fans,” she wrote at the end of the clip.

The release of the Fearless (Taylor’s version) album follows the singer’s long battle with music manager Scooter Braun, who, according to Glamour, has owned, in full or in part, the master recordings of Swift’s first five albums. After multiple attempts to buy back her masters, Swift resorted to re-recording and re-releasing her music without the support of Braun.

Banner photos from Taylor Swift on Instagram and taylorswift.com.

Taylor Swift’s music has been sold without her knowledge...again