Wonder Woman 1984 will be premiering exclusively in the Philippines on HBO Go this Wednesday, April 21 after its debut on HBO Max in the US on Christmas Day last year.

The film sequel starring Gal Gadot and directed by Patty Jenkins takes viewers back to one of the most memorable decades in terms of fashion, with Diana Prince living among mortals in the vibrant, sleek 1980s.

The fashion on screen offers a fun and colorful departure from the original Wonder Woman film which was set mostly in 1918 during World War I, where costumes were decidely more stark and heavy, befitting the tone of the film.

In Wonder Woman 1984, we see the return of the retro style, including large shoulder pads, bright colors, and even the fanny pack.

Looking for some style inspiration? Here’s a look at the thought process behind the costume design and how you can inject looks from Wonder Woman 1984 into your own wardrobe.

To capture the authentic retro look and feel of ’80s fashion, Hemming reportedly had to create a whole range of clothing and draw inspiration from not just the mainstream looks of the decade, but also incorporate styles of previous decades, and factor in micro-cultures such as punk.

“There were lots of ordinary people who were still dressing from the late ’70s, some still dressing from the ’50s. There were the punks. We see Stetsons and cowboy boots and some bolos on people who have come into town from somewhere in Virginia to go shopping at the mall. There are Memphis print shorts and Hawaiian shirts, the extreme Jane Fonda-type workout leotards, leg and wrist warmers and headbands, as well as zip-up jackets tied around the waist with the arms hanging down,” explained Hemming in an HBO news release.

The superhero film channels iconic trends of the era including leather suits and large shoulder pads made popular by shows of the time like Dynasty. 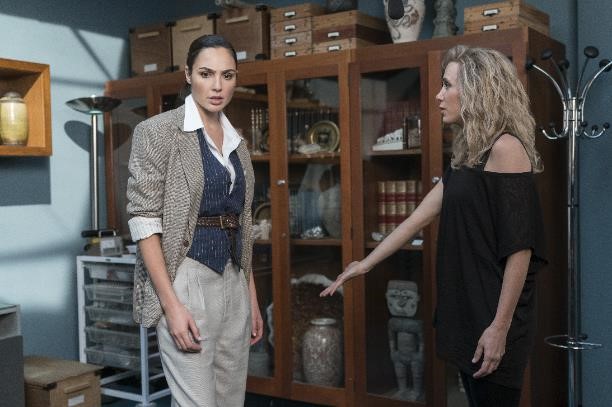 “I loved the original leather tailored suits—the ones with the puffy shoulders and different patterns of leather. There’s one with faux snakeskin panels set into a pink leather jacket with piped edges and a tight skirt,” said the costume designer.

“At the fundraiser you see more metallic fabrics, which had become popular just then. In secondhand shops we found loads of metallic dresses with frills and bows and such, so we created a mixture of younger people dressed like that and then older, more matronly ladies with Dynasty-style shoulders and draped dresses.”

Gal Gadot, who reprised her role as the Amazon Princess Diana, described finding the correct look for her character in the latest film as a “fun process.”

“We wanted to keep the tones very specific. She keeps very much to herself, so she wouldn’t wear pink or orange or yellow or green or red. We wanted her to be cool and elegant and not to draw attention to herself,” said Gadot. “I ended up loving the blue suit that she wears to work at the Smithsonian, and the three-piece suit that she wears. I even liked the air base jumpsuit; it was very comfortable!”

Director Patty Jenkins commended Hemming on her designs and for showing a range of looks for both Gadot’s Diana Prince and Kristen Wiig’s Barbara Minerva, a.k.a. villain Cheetah. 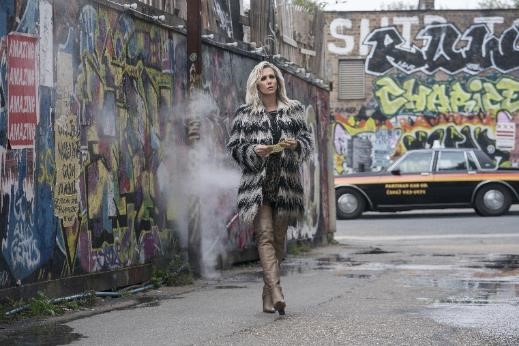 “Something we worked very hard on with Lindy, who is just an incredible designer, was to not only incorporate the fun and humor and the colorful qualities of the ’80s looks—a lot of which you’ll see on Kristen as Barbara—but to also bring in the elegant and beautiful styles we had then,” Jenkins said.

The costume designer was tasked not only with coming up with fun and unique looks for the female leads, but for the male characters as well.

As Maxwell Lord, Pedro Pascal wore suits reflective of the era and Lord’s desire to look the part of a wealthy businessman. The film also contains a montage of looks for Diana’s love interest Steve Trevor played by Chris Pine to entertain the audience with a showcase of nostalgic men’s options from the era, including the infamous fanny pack.

“All of it had to appeal to the military man in him who wants function and efficiency—movement, pockets, and obviously the most comfortable shoes he’s ever put on in his life. And the fanny pack, which makes perfect sense to him and gave us a great ’80s touchstone moment,” explained Jenkins.

According to Pine, Steve’s whole look for the film was an “ode to the popular films of the era” including the baggy-ish pants with pleats, and the scarf.

“Lindy is a brilliant costume designer and she gave me all of these ’80s things to try on in a scene that Patty crafted to be a sort of callback to the first film, when Diana first comes into the human world and goes and tries on all those clothes. The comfort level was terrific after the 40 pounds of early 20th century wool I wore in the first film,” said Pine.

As for the fanny pack, the actor found Steve’s belt bag accessory so handy that he actually bought one for himself.  “I actually ended up getting my own fanny pack and used it constantly while I was biking around Washington DC,” recounted Pine.