Phasmophobia is what every aficionado of the paranormal dreams of.

A game filled with haunting encounters with ghosts at abandoned schools or even demons and poltergeists at asylums, it’s basically experiencing the horror series we all got spooked at as kids – Goosebumps and Philippine Ghost Stories, anyone? – in real time. So, if you and your friends fancy a night of ghost-hunting without real-life repercussions, this is the game you’ve been looking for.

Developed by Kinetic Games, Phasmophobia is an online psychological horror game that allows players to act as paranormal investigators probing haunted locations for ghostly activity. The objective: using a variety of ghost hunting equipment, players need to ascertain the identity of the ghost for the ghost removal team.

It was released on early access last September for PC with crossplay virtual reality (VR) support. So, if you’re up for the extra challenge, VR’s the way! It’ll definitely be more thrilling, especially since the game has voice recognition, so the ghosts can hear you and talk to you as well!

If you’re feeling brave, play it at night.

Absolutely never mind that the game title ironically means, “fear of ghosts.” But then again, with more than 70,000 average viewers according to Twitch Tracker as of writing, people are likely bent on conquering their fears with this game.

That does say a lot about this horror game. As someone who’s easily spooked, experiencing this game, needless to say, exercised my ability to remain calm. An exercise in futility, to be candid, based on the screams of horror that escaped my lips. It’s not enough that it’s set in various locales typically haunted in real life – the ghosts had to have hunting abilities that intensify based on the level of your sanity. See, the lower it is, the higher the chance of fatality.

The tricky thing with this game is it changes locations and you won’t encounter the same type of ghost for every site. There are twelve ghosts so far, and dealing with the more hostile ones is no walk in the park.

For example, if the evidence you gathered leads you to conclude that it’s one of the less volatile Spirits, it’s still no guarantee that your team won’t get attacked. Regardless of you playing it on amateur or professional, the game absolutely doesn’t cut you any slack. 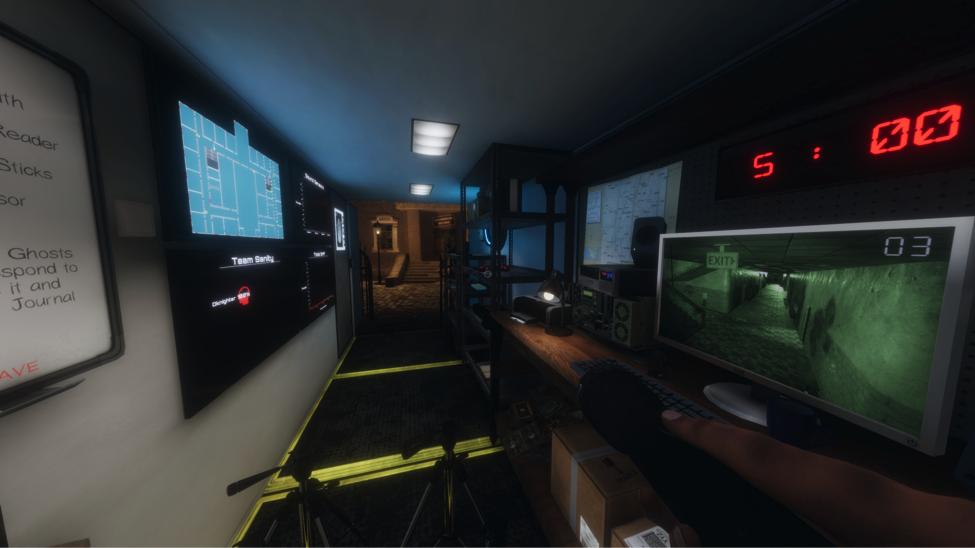 That’s why arming your team with the proper equipment while maintaining your wits about you despite the game’s terrifying theatrics are a must.

The ghost-hunting equipment typically comprises electromagnetic (EMF) readers, spirit boxes, crucifixes, salt, and smudge sticks, among others. Using these items effectively depends on your team’s strategy, but one of the best ways to ensure your survival while investigating is to not use the name of the ghost when you’re asking for a sign. That will definitely earn you the ire of the entity.

That being said, Phasmophobia was still a thoroughly enjoyable game. Strangely enough, doing the paranormal investigation itself lent a very sobering effect that helped lay off the more terrifying aspects of the game. It’s a ghost mystery game, after all, and as long as your wits are about you, unraveling the identity of the ghost can be very satisfying.

So, if you’re feeling brave, play it at night.

The chills will definitely feel real.