This is the story of a center – a community library, to be exact – literally built via bayanihan, and how this piece of architecture was taken on an enchanting trip from Brgy. Encanto in Angat, Bulacan, to Venice, Italy.

In between the two dots on the map would be the high seas, many obstacles, and the gaping chasm that was (and still is) the pandemic, but the bridge would be the idea behind “structures of mutual support” as well as the good people bolstering the initiative.

Their names are legion but the goal is one: to participate at the 17th Venice Architecture Biennale by presenting an architectural philosophy of inclusion. Virus, lockdowns and isolationists be damned.

After a year’s postponement, the biennale vernissage was held last Thursday — uh, physically, in the Italian city, with all the health and safety protocols in place — while the event was live-streamed to the rest of the world via Zoom.

The exhibition at the Philippine Pavilion with its prime location in the Artiglieri of the Arsenale is the response of curators Sudarshan Khadka Jr. and Alexander Eriksson Furunes to the curatorial question, “How will we live together?” — the theme of this year’s biennale curated by Lebanese educator and architect Hashim Sarkis.

That question has a deeper resonance and a more problematic dimension in our time, considering the refugee crisis, persecution of migrants and minorities, extreme weather and climate change, political fractionalization, and — the plague in all our houses — COVID-19. How, indeed.

For Khadka and Furunes of Framework Collaborative, the key is in people relying on other people more, with us throwing in our lot with them — the action of the collective. And during these antagonizing and agonizing times, architecture plays a pivotal role in how we interact with each other, how we share space, how we negotiate our place in a fluctuating terrain and an even more fluctuating zeitgeist.

The curators explain: “The question of how we live together is also a question of how we build together. Something is wrong with the way we live together: when people feel alienated from their surroundings; when construction is primarily for speculation and profit-making; when buildings are mere products to be bought and sold; when resources are scarce due to over-extraction; or when laborers are exploited. Today’s environmental and social challenges need to be addressed as interconnected problems, and architects can either play along or propose new ways of building and living together.”

For them, architecture is not a static object but a process, a progression. To prepare for the biennale, Khadka and Furunes facilitated a series of workshops for volunteer residents from the Gawad Kalinga (GK) Enchanted Farm in Angat, Bulacan, to derive a common language in building something they all want: a library within the village.

According to the curators, “Due to the cramped living conditions, the youth found it difficult to focus on school work in their houses, so they expressed the need for a space to study and do their homework together. They also felt the need to have a space where they could take a break and have some private time. The parents also wanted to have a space where alternative learning classes or training seminars could be held so that they could learn English, learn new skills, or finish their basic education.”

The participants from 60 households — composed of laborers, farmers, housewives and students — sat down with the architects to design the community center and hangout space of their collective dreams.

They talked about what they felt would add meaning to the community and be relevant to their needs. In the spirit of bayanihan, all were encouraged to contribute their own ideas for the look and purpose of the structure they wanted to build.

The library was built on-site in Bulacan, disassembled in a basketball court, shipped to Italy, and meticulously reconstructed in Venice. It was not just the object that traveled on the ship, but the idea of Pinoy bayanihan (as well as Norwegian dugnad and other similar traits around the world), the aspirations of a community that made that trip as well.

Some might crack, why go at all and participate in the biennale at this time?

Deputy Speaker Loren Legarda, the principal advocate for the country’s participation in the Venice Biennale in both Art and Architecture, sounds off on why it is important to push through with the biennale — despite the global pandemic showing little signs of waning — and with the Philippines taking part in the exhibition.

“This current landscape brought about by the pandemic has led us to ponder on issues, no matter how trifling these may seem. It has also led many of us to rethink, redesign and rebuild our spaces, as we are all confined within our homes. Space has thus been redefined in terms of its physicality and presence. Architecture is not only a spatial but a social contract, a universal and inclusive concept that puts us together into a whole, allowing room for difference and coexistence.”

Legarda mentions how participants in biennales past — such as Lani Maestro and Andy Locsin — laud the curatorial concept of Framework Collaborative, mainly its thrust toward championing the collective, fostering engagement and solidarity. 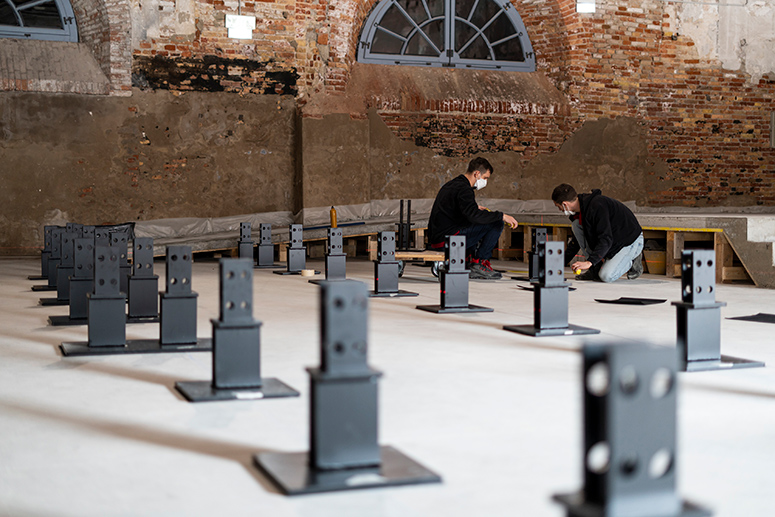 She adds: “This year’s Philippine participation will highlight the Filipino concept of mutual support, bayanihan, and how it can shape architecture anew by providing an alternative model to ‘building’ in terms of the architectural praxis. Our desire to participate at the Venice Biennale for Architecture has intensified in the sense that we need to show the world the value that has long been ingrained in our identity as Filipinos. We are not just sharing how architecture is a process; we are also recounting the lives and stories of a people, bound together by values into one strong community.”

How stunning the stories are — housewives making popsicle models of the library, teens using nylon strings to imagine onsite spaces, everyone mapping out the future structure.

Sudarshan points out that the construction of the pavilion has gone through a volcanic eruption, multiple typhoons and even the pandemic. “When we started, we had no idea at all what the end result of this project would be. We didn’t know what the community would want or what we would be building together.” Maybe it was all there in the ether, and — to turn it into a reality — all it took was a village.

Structures may fall, be discarded, deteriorate. But a community working together creates something far beyond the frames of construction.

The biennale runs from May 22 to Nov. 21. The Philippine participation at the 17th Venice Architecture Biennale is a shared undertaking of the National Commission for Culture and the Arts in partnership with the Department of Foreign Affairs and the Office of Deputy Speaker and Antique Rep. Loren Legarda.  Special thanks to Riya Lopez, head of the Philippine Arts in Venice Biennale.