Style Living Self Celebrity Geeky News and Views
In the Paper Shop Hello! Create with us
Screenshot/Died Suddenly on Rumble

Year 3 of the pandemic is fast approaching and vaccine hesitancy continues to be one of the world's biggest problems against full recovery.

According to the data compiled by the University of Oxford from government sources, 65% of the world's population has been fully vaxxed against COVID-19 as of Nov. 21, 2022. As the remaining 35% haven't received their second dose yet or still at two minds about getting their first shot, a new documentary film has been making the rounds on Twitter and urging people to ditch the idea entirely.

Titled Died Suddenly, the film is anti-vaccine propaganda alleging that getting the COVID-19 vaccine resulted in the sudden death of many people. The documentary suggests unsubstantiated claims about the tragedies and, as Forbes reported, it does not use scientific evidence in relating vaccine intake to the tragedies.

Directed by conspiracy theorist Stew Peters, Died Suddenly premiered on Rumble on Nov. 21 and is described by the video-sharing platform as a film that vows to "present the truth about the greatest ongoing mass genocide in human history." Several US-based publications, however, have been stressing that the film is instead a smear campaign featuring reports about people the film's creators presumed to be dead after taking their COVID-19 vaccine.

This includes a young athlete whose mother was quoted as saying, "My kind, compassionate son died unexpectedly," when in fact, he died in a car crash. It is one of the several genuine deaths the film included in its lineup, but with the real causes pointing to other factors than the antibiotic.

Another misconstrued story the film presents is that of college basketball player Keyontea Johnson, who passed out on the court in December 2020 even before he had a vaccine. According to BBC News, Johnson didn't die just like the other people featured in the film. He was even seen returning to the games earlier this month.

Forbes, meanwhile, pointed out how the film used an unidentified Canadian embalmer as the source person when "you can't really tell who this person really is."

Died Suddenly has so far earned over 4 million views on Rumble and at least 1.5 million views on Twitter, according to BBC. Since its premiere earlier this week, the film has been trending on Twitter as viewers continue to air their opposing reactions to its hot take on the global issue.

One Twitter user lauded the film, saying "After watching @DiedSuddenly, I've never been so glad I chose not to vaccinate myself, or my children. I was told I'm an inconsiderate, conspiracy nut. To all, this is an absolute MUST watch."

Some Twitter users, like podcaster and author Shane Tott, shared how they themselves witnessed how their loved ones "died suddenly" after getting the vaccine.

"My brother died suddenly a short time after his second vaccination. Even after his first vax he 'didn’t feel right and started napping daily. RIP Sean," Tott wrote.

Another user described Peters' work as a must-see "game changer." The user tweeted, "The Died Suddenly film is a game changer. I have never been more confident I made the right decision... The truth is hidden no more!"

On the other hand, one user lambasted the film for citing embalmers who claimed that they found "fibrous mass clots" on most of the bodies they embalmed "for over a year."

The user tweeted, "DIED SUDDENLY' What a load of f*cking horse sh*t. Embalmers and/or Morticians DO NOT CONDUCT POST-MORTEMS. My husband has been a Funeral Director for over 30 years."

"Died Suddenly' is the new 'Plandemic' is the new 'Vaxxed'... Just another vaccine misinformation, dishonest framing, and conspiracy theory reheated and reserved. It's always the same," McAlpine said.

He also reposted a tweet by The Real Truther, which pointed out that Johnson, indeed, collapsed in 2020 before he had his vaccine and that he didn't die. 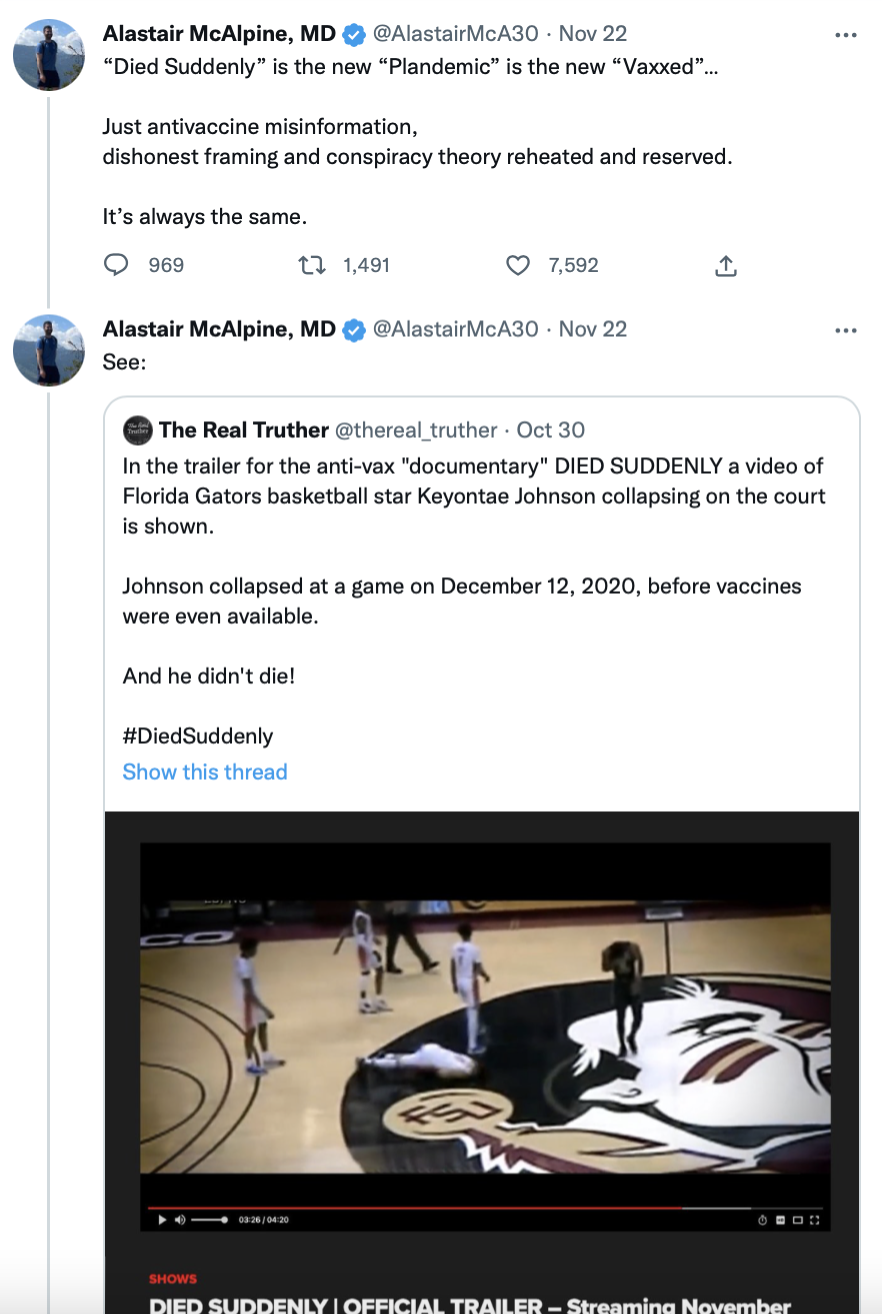 Dr. Angela Rasmussen, a virologist at the Vaccine and Infectious Disease Organization at the University of Saskatchewan in Canada, also referred to the film as a looting scheme for swindlers.

"Died Suddenly' is trending so let me save you the trouble of looking it up," she started. "It’s anti-vax propaganda. A couple hours of grifters telling lies so you’ll give them money. Even half of the people who supposedly 'died suddenly' didn’t die!"

This isn't the first time Peters found himself and his work in hot water. In late 2021, his self-titled show was banned from Spotify for making false claims about the COVID-19 vaccine, even baselessly calling it a "bio-weapon."

In April of this year, Peters made headlines for releasing Watch the Water, another anti-vax documentary suggesting that COVID-19 vaccines are made of snake venom. The bounty hunter-turned-radio host has since been infamous for creating content against governmental organizations, such as the US Central for Disease and Control and Prevention.

REVIEW: ‘She Said’ is a gripping tale of how journalism took down a kingpin of sexual abuse