That’s right! Fans can now binge watch all first four films of the beloved Japanese film franchise Rurouni Kenshin which will be available to stream on Netflix starting June 18.

Rurouni Kenshin follows the tale of wandering samurai Kenshin Himura, portrayed by Takeru Satoh, during the year 1868 or the early Meiji Period in Japan. Before offering his inverted sword to protect those who are in need, Kenshin Himura was an infamous assassin known as Hitokiri Battousai, which means "sword-drawing man-slayer."

The first film garnered quite the following and was well received across the globe. The series was then succeeded by two more films—Kyoto Inferno and The Legend Ends in 2014 with Tatsuya Fujiwara (Light Yagami in the 2006 film Death Note) as the main antagonist.

Almost six years later, the franchise returns with Rurouni Kenshin: The Final which was released in Japan on April 23. 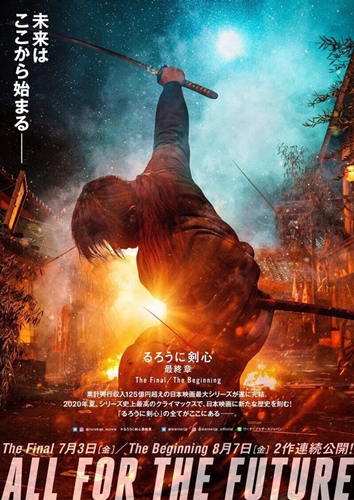 Set in the year 1879, Kenshin and his allies must face their greatest opponent yet, his former brother-in-law, Yukishiro Enishi, who vows revenge over the death of his sister.

Emi Takei, Yu Aoi, and Tao Tsuchiya are set to reprise their roles.

The latest film, Rurouni Kenshin: The Beginning which was released on June 4 in Japan is also set to be on Netflix later this year. This time the film is a prequel to the first four films and depicts how Kenshin Himura received his cross-shaped scar. It also features his time as the Hitokiri Battousai and his relationship with Yukishiro Tomoe.