The National Commission on Indigenous Peoples CAR (NCIP-CAR) has issued a statement affirming that Kalinga tattoo artist Apo Whang-Od did not consent to the Whang-Od Academy masterclass presented by e-learning platform Nas Academy.

The Nas Academy and Whang-Od dispute started in early August with reports that Nas Academy did not receive full consent from the 104-year-old tattoo legend for their masterclass promising to "reveal all of [Whang-Od's] rituals, tools, and methods for making traditional tattoos" for P750.

Whang-Od's granddaughter and protegée, Grace Palica, first spoke out via Twitter to call the class a "scam."

Now, the NCIP has released their findings by way of NCIP-CAR Regional Director Atty. Marlon Bosantog looking into the issue via personal interviews and contract reviews.

Per the now-deleted press release, Whang-Od did not give her consent to the project and is not aware of signing any contract provided by the platform, as "no provision of the contract was explained or discussed to her or to her representative, or what was assured of her is external to the terms of the contract."

They added that Nas Academy's contract was "grossly onerous" for Whang-Od, as it stated that Nas Academy would have full ownership of what the class would produce, such as the image, likeness, and voice of the tattoo artist.

They also mentioned that Whang-Od's supposed thumb mark affixed on Nas Academy's contract had "disparities" to one affixed on a clear sheet of paper, probing further forensic studies. 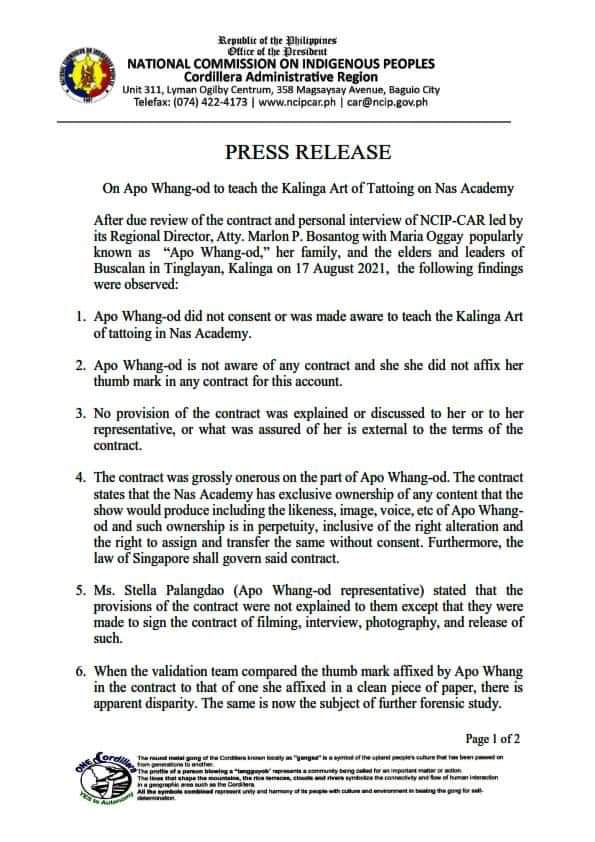 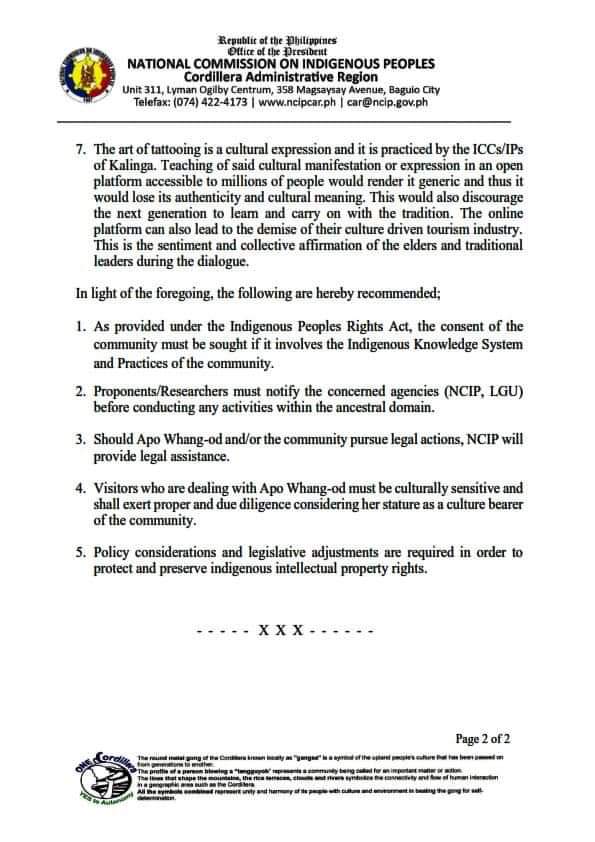 With Whang-Od tattoos serving as a cultural identity and expression of the Kalinga people, the NCIP concluded that Nas Academy and future researchers must receive consent from the community before pursuing mass production of the craft in the future.

They also offered to extend legal assistance to Whang-Od if the latter decides to pursue legal action against the platform.

Meanwhile, Nas Academy has also released a statement on the matter, saying that they were not given the chance to work with the NCIP.

They added that they collaborated with an undisclosed Filipino production company "known for the projects they produce on Indigenous Peoples" to make the project happened and spent two days with Whang-Od and her niece.

The platform also countered that Whang-Od was not aware of any contract, as they pertained to a now-deleted video of the tattoo artist affixing her thumbmark among her family members.

"As shown in a portion of the video which we released, you can see that Whang-Od affixed her thumbprint on the contract, only after the contents had been explained to her by the local Filipino production team with the help of Estela. It was only after the permission was granted by the family, that the filming started," they wrote.

Nas Academy also specified that the contract was not "orenous" as Whang-Od was made aware of the revenue. They shared that the tattoo artists' niece made a bank account for that purpose.

"We were ready to cooperate with the Regional Office of the NCIP in its investigation," they said. "But Nas Academy was not given the chance to explain its side before arriving at a conclusion and releasing a statement. This is not how a fair investigation is held. Both sides must be heard to reach a fair and informed conclusion."

"We regret the inconvenience made to the public. We think this issue is the result of internal disputes that are outside of our control. That being said, we remain committed to our mission in the Philippines," their post concluded.

Nas Academy has since operations amid the allegations and promised to work with the NCIP to "focus on strengthening our processes around how we collaborate with our partners."