The classic action role-playing game Diablo II, which was first released two decades ago as a click-and-loot video game, is finally arriving on next-gen consoles this September.

Whether you’re new to the game or a longtime fan just itching to relive the timeless classic, the gates of Hell will be ready to welcome you in Diablo II: Resurrected.

Diablo II: Resurrected is a faithful remaster of the dark fantasy and horror classic developed by Blizzard North and published by Blizzard Entertainment, which was originally released for Microsoft Windows, Classic Mac OS and macOS in 2000. This definitive remastering also includes its Lord of Destruction expansion released in 2001.

‘Diablo II’ remaster set for PC and consoles this year

I had the chance to play the early access Beta, which was made available last Friday (August 14) for the PS4 and PS5, and felt instantly transported back to the good old days of internet cafe gaming and character saves that still required floppy disks.

Fans of the 20-year old title will be able to replay the game they know and love, with support for cross-progression between platforms and full controller support.

For the Early Access, which runs until Tuesday (August 17), you’re given a choice of either single-player and multiplayer story campaign, with five out of the seven playable character classes available. The multiplayer option also allows up to eight players to play cooperatively in Act I: The Sightless Eye and Act II: The Secret of the Vizjerei. 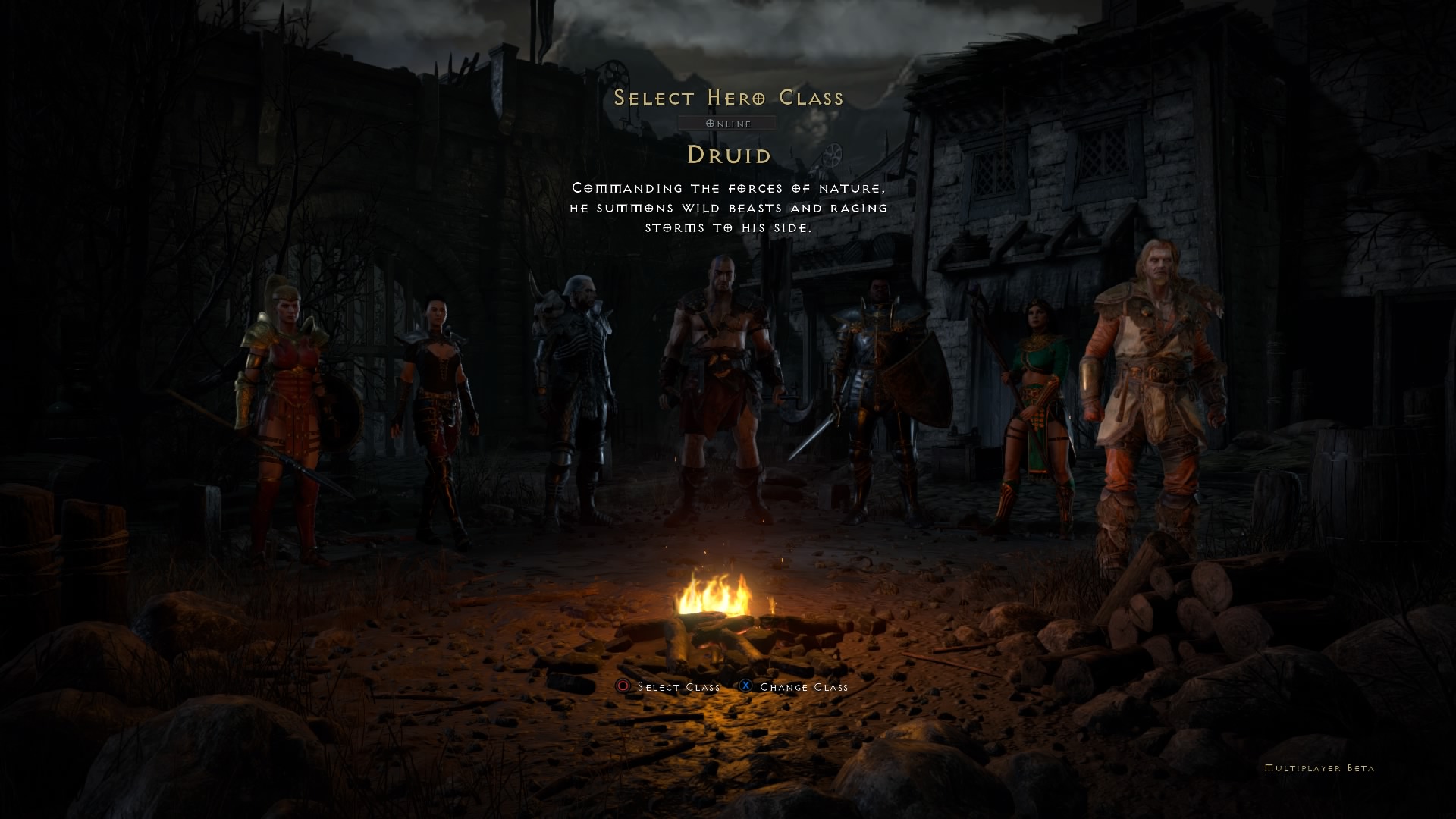 For this preview playthrough, I tried out the single-player game using a PlayStation 4 Slim edition with a DualShock 4 wireless controller, playing for about about 5 to 6 hours just to get the feel of the game and level up enough to make the battles more fun. Then a couple more hours to complete the six story missions in Act I.

D2R requires a Battle.net account linked to your PSN account. Setting up, connecting to Battle.net and logging in took a bit of time, no doubt due to the overwhelmed servers, but once I was able to get in, the nostalgia fest began.

The game opens with a cinematic shot-by-shot remake of the introduction as seen below, with incredibly sharp and crisp details, which players can now enjoy with 7.1 Dolby Surround support.

For those who want to see how the graphics have evolved, GameSpot broke down the Act 1 and 2 opening cinematics of the 2021 remastered version to the original cutscenes from 2000.

After watching the cinematics, you can start a new game by choosing a player class.

For the Beta, five out of the seven unique classes are playable—the Amazon, Barbarian, Druid, Paladin, and Sorceress, each with highly customizable builds and gear options. The complete game will also have the Assasin and Necromancer.

For my initial playthrough, I immediately picked the Druid, a fairly balanced character capable of both melee attacks and spellcasting, with the ability to summon creatures like wolves, ravens, and tree spirits to aid in battle.

Having originally played Diablo II two decades ago (as well as Diablo III) on a desktop computer with a mouse for controls and a keyboard, I was worried that playing on a controller would be more difficult.

However, I found using a controller surprisingly intuitive. Exploration and movement felt smooth and you can evade attacks more easily with the use of the analog stick. Spells and commands are triggered by specific controller keys. 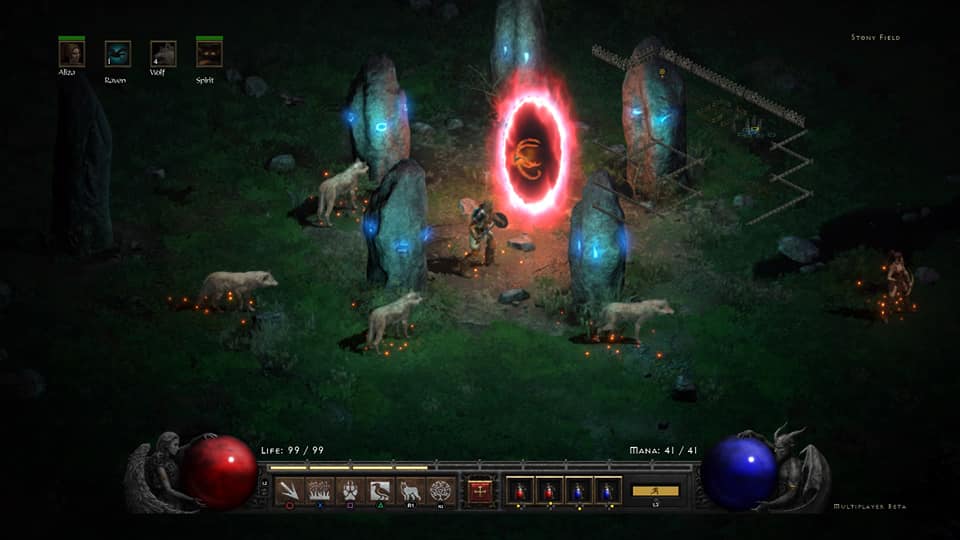 According to Blizzard, bringing the classic keyboard-and-mouse gameplay to a controller offered a unique challenge for their game development team.

Writing on the PlayStation blog, Design Director of the Diablo franchise, Robert Gallerani, broke down the major differences for PC versus console players.

“In the original Diablo II, a player has two buttons: left and right mouse click. To gain access to any number of other abilities, players use hotkeys to quickly remap these two buttons. This is a very roundabout way to use abilities,” said Gallerani.

“With a controller, we changed this to not remap, but to have buttons directly trigger the abilities. We then display these abilities very similarly to Diablo III, in a “tray” on the bottom of the screen. However, given that players can have a significant number of abilities at any given time, we allow players to hold the left trigger to provide the player with access to another six slots, effectively giving players 12 slots to quickly launch any abilities,” he added. 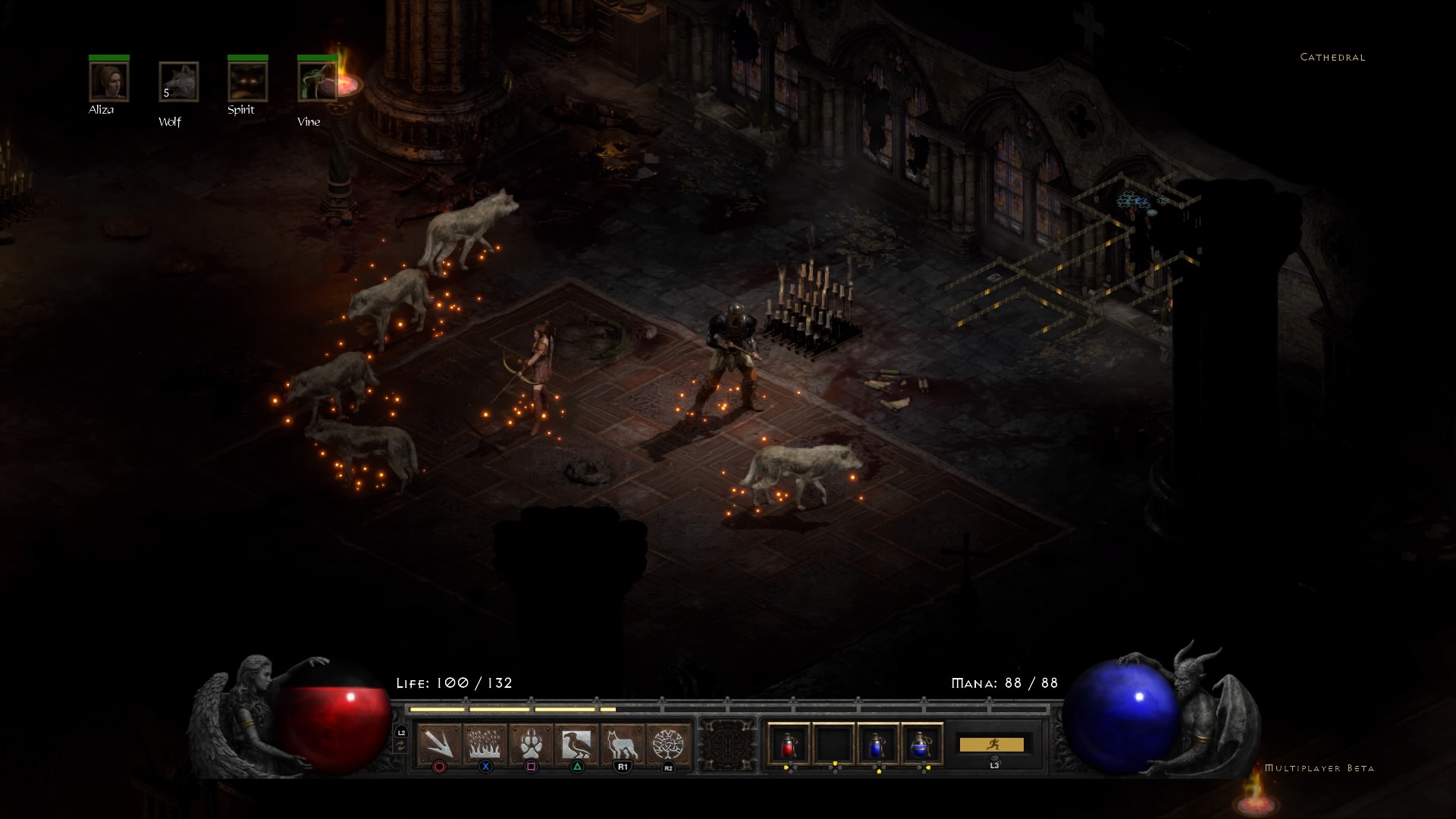 One of the main challenges is that there are fewer buttons on a controller than a keyboard, so designers had to trade-off button mappings and ensure the most essential abilities are on the easiest-to-reach buttons, based on the feedback they got from the Technical Alpha (from PC controller players) to meet players’ expectations.

When leveling up the character’s skill tree, you can “bind” a skill to a certain button. In my case, I assigned a fire spell to the X button, werewolf transformation to Square, and various summons to Triangle, R1 and R2 in the sequence they became available. Health and mana potions can be used with the directional arrow keys and the handy Scroll of Town Portal is automatically assigned to L2 plus circle. 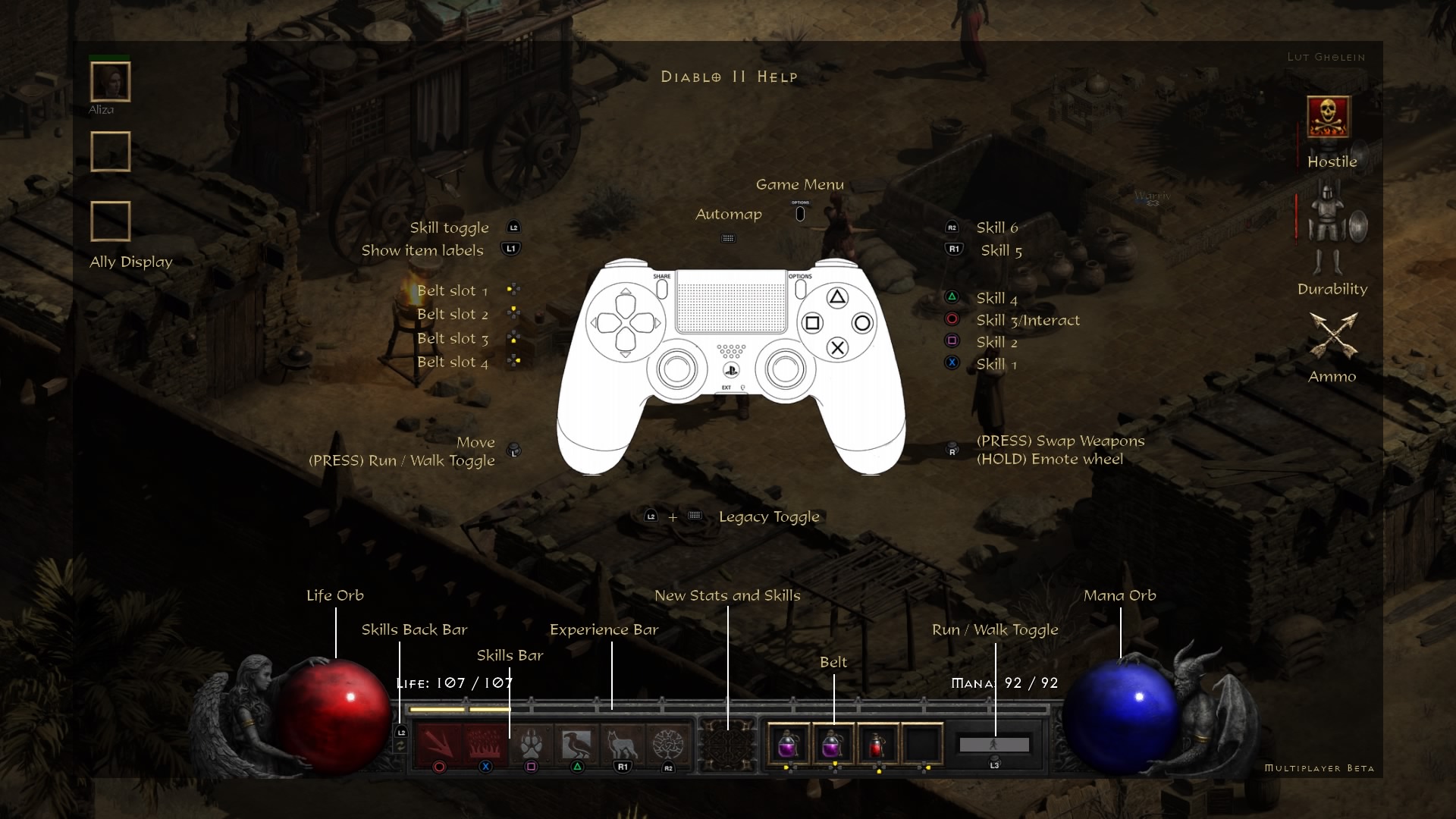 In terms of overall gameplay, playing Diablo II Resurrected felt very familiar and nostalgic, like rediscovering a favorite hangout or finding a long-lost toy that gave you so much joy as a kid.

The old-school dungeons, music, voices of characters you encounter like Deckard Cain, asking you to “Stay awhile and listen” and sound effects like drinking health or mana potions felt instantly comforting.

The randomly-shifting layout of the lands you need to explore, forcing you to completely map out areas to find waypoints and caves feel somewhat dated, but are just as you remember. Even the extremely limited Inventory system that prevents you from hoarding every single weapon and chipped jewel you come across feels very familiar. 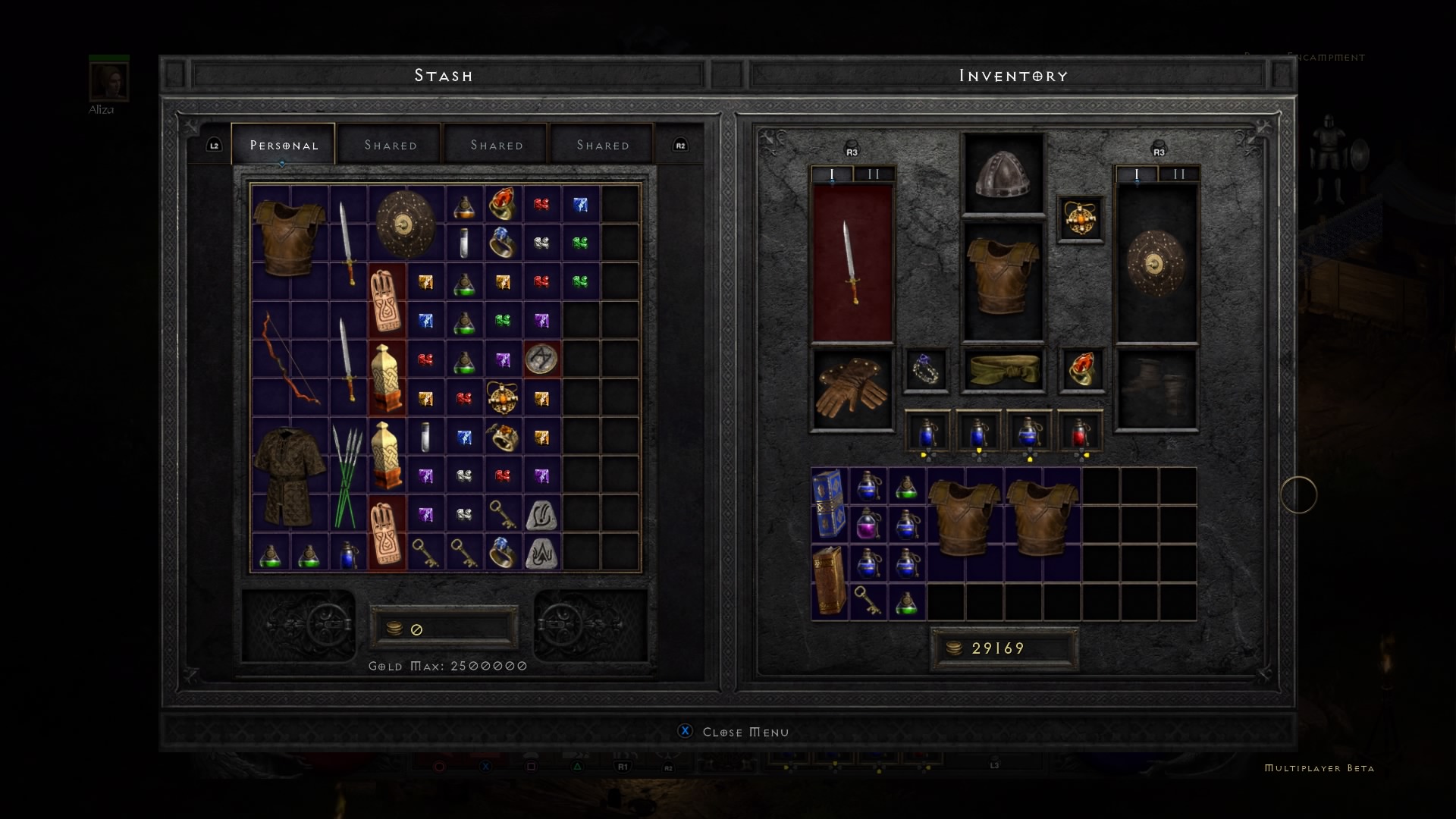 You’re constantly reminded that you’re overburdened and forced to make frequent visits back to the Rogue Encampment to keep items in your private stash or just drop them and reorganize your potions for easy access.

Without a mouse’s cursor, picking up specific items requires more precision and requires you to hover over an item until it’s highlighted, which can be tricky especially if all the items explode in a pinata when you beat a boss. Thankfully, gold is automatically picked up when walking over it.

The game requires a steady internet connection to play, and frequent interruptions can really disrupt the flow of your gameplay, much like the old days when you’d automatically get disconnected once your paid hour or so was up at an internet cafe. 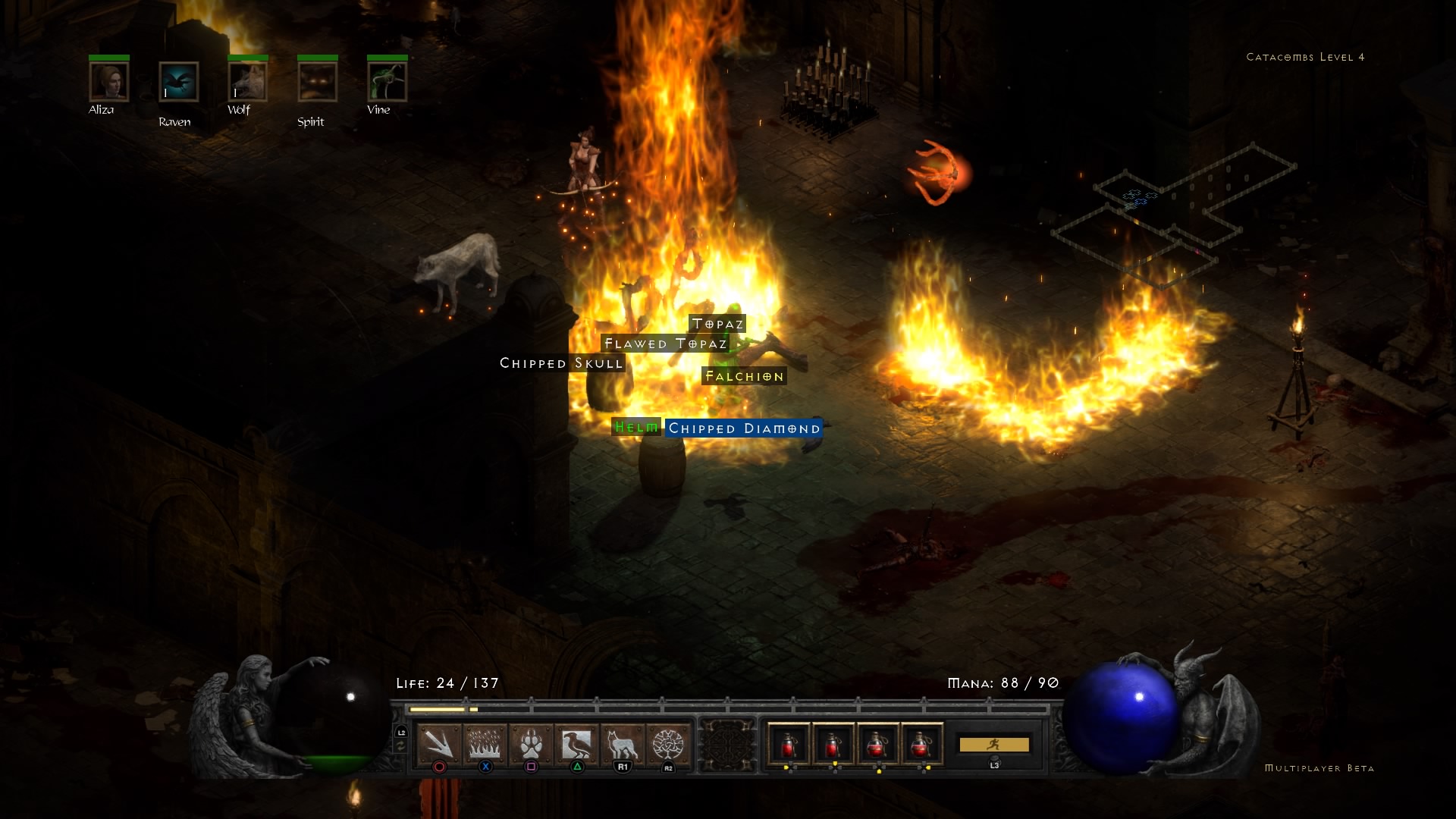 In the few hours I played the game on a Sunday afternoon and a bit on Monday to get from Level 1 to Level 16, I got kicked out twice due to internet connection issues. This means loading the game again will bring your character back to town, which can be particularly frustrating if you’re already deep in the fifth level cellar of the Forgotten Tower and neglected to set up a Scroll of Town Portal for safety. Tip: Always make town portals in dungeons and near bosses.

I was only planning to check out the game for an hour or two, but found myself getting reeled in and wanting to improve stats the longer I played, at least long enough so I could summon five wolves and transform into a werewolf, because the battles are really more fun with allies by your side. Then I ended up completing Act I as well, when the quest to kill Andariel became available. 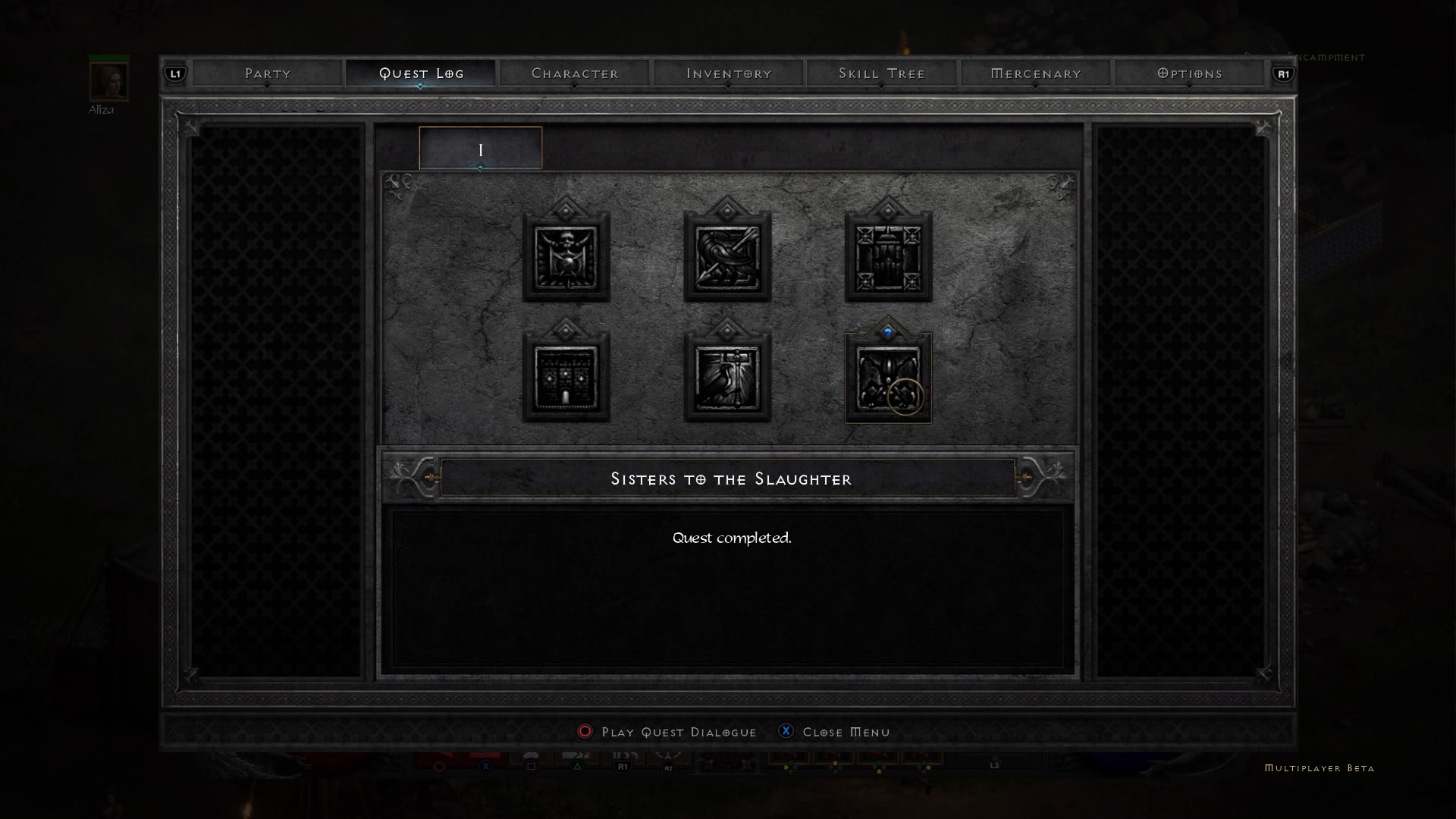 While single-player can be satisfying, this game is best played with friends in multiplayer mode. With social distancing still a thing in the foreseeable future, virtual demon-hunting could be the new weekend hangouts.

If you’re looking for a game to occupy your time with the extended lockdowns and a respite from real-life horrors of pandemic living, confronting the minions of the Burning Hells promises a fun, nostalgic experience.

For those who weren’t able to catch the Early Access, the Open Beta weekend will kick-off this coming Friday, August 20. All players across the PlayStation community will be able to freely download the Diablo II: Resurrected Open Beta and get access to the same playable content as the Early Access. 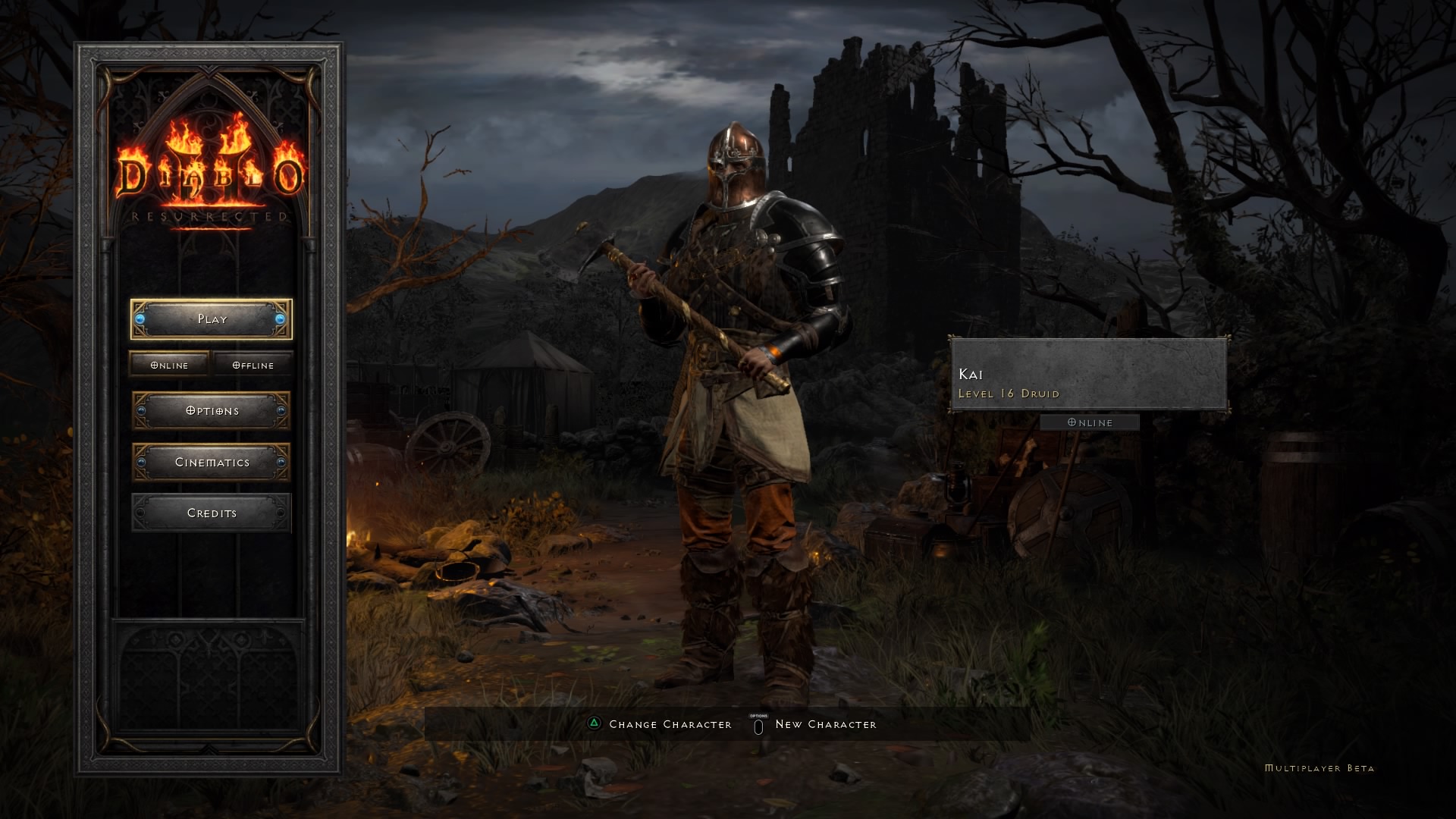 While a PlayStation Plus subscription is not required during Early Access or the Open Beta, it will be required to access multiplayer features at launch on PlayStation systems.

The remastered version will be available as a standalone game ($39.99) or as part of the Diablo Prime Evil Collection ($59.99), which also includes the Diablo III Eternal Collection and the Mephisto pet and Hatred’s Grasp wings for Diablo III.