The final story in Noelle de Jesus’ second short story collection, Cursed and Other Stories, takes place in New York, as word comes to the Filipina character Rosario that a volcano has erupted, spreading ashfall across Central Luzon.

It could be an event from early 2020, as Taal Volcano blew its stack, summoning forth a Year From Hell. But it’s more likely the Pinatubo explosion of 1991 de Jesus is referencing here, a crossroads moment for the Philippines, when a brain drain was leading more and more OFWs to flee from economic misery and seek a separate life elsewhere.

That’s the perspective many characters face in Noelle’s collection, published in 2019 by Penguin Books Singapore. After misplacing the book for a long time, I dove into Cursed and Other Stories again recently, to see what her characters have been up to.

'Small Sacrifices' is about a Filipina caregiver in Ireland, looking after an aged Irish priest who’s come back from his mission in the Philippines, facing a decline into dementia. She’s surprised one day when he grabs her breast and dry-humps her in some dark corner of a private room.

There’s “Small Sacrifices” about a Filipina caregiver in Ireland, looking after an aged Irish priest who’s come back from his mission in the Philippines, facing a decline into dementia. She’s surprised one day when he grabs her breast and dry-humps her in some dark corner of a private room. But she allows it. Sees it as part of the accommodations she’s made in her life.

De Jesus, a Palanca Award winner, has a skill at setting, local detail, and psychological insight. Like Irish writer William Trevor, she allows the commonness of life to kind of seep out, at its own pace. Her characters feel like they’ve been there for a while.

Like Pilar, answering an ad to be a nude model for an art class (“Posing”); or Iris teaching family planning to adults in a province (“Names of Flowers”); or Lizette, living amid Duterte’s drug war where ghosts of victims — as well as past lovers — invade her evenings (“Michael”).

Some of Noelle’s characters live in the Philippines, while most face an atomized existence somewhere between “home” and “away.” This might be the perspective of every writer in exile, as well as every Filipino working abroad. There’s a longing here, often paired with, or set off by, passion and love for an absent “other,” a present “another.”

From that vantage point, de Jesus, based now in Singapore, continues to tap into what it means to remain quintessentially Filipino, even elsewhere. 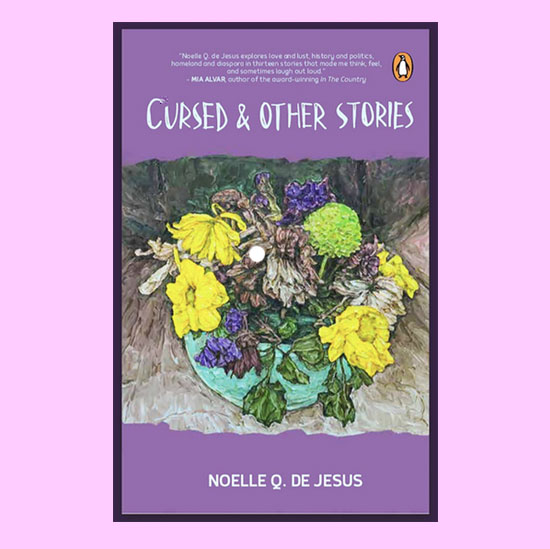 In the title story “Cursed,” it’s Rosario, torn between a safe American boyfriend and a phone call from the past (one of the reasons I believe this is set in 1991, not 2020, when Taal erupted, is the phone calls come on landlines, not cellphones). It’s a former love named Dennis who’s also fled the corruption and economic misery of a country he bitterly calls “cursed.”

It’s a self-fulfilling prophecy that I’ve heard many Filipinos utter, whether with a smile, or muttering under their breaths, throughout my stay here. Even the language Noelle uses to convey shifts in perspective, like a camera changing shots, hints at the divided reality of a foreigner abroad — something I’ve often felt myself.

Rosario also feels torn, literally, by a scab that’s formed on her lower calf, from a shoe digging into her skin. She fusses with it throughout the story, one that’s filled with sly language (“And so, out of context, hurriedly and ever so functionally — she had sex with Jon, because it was expected as a matter of course. Intercourse.”), and understated longing.

And am I the only one who pictures the scab that Rosario removes from her leg at the end of the story, leaking blood, to be in the shape of the Philippine islands?