Style Living Self Celebrity Geeky News and Views
In the Paper Shop Hello! Create with us
Seven BarrettoMina Lampitoc

#LoviYourBody—a hashtag coined by Lovi Poe. The term doesn’t mean vanity nor conceit. It’s about doing things that would make her feel good about herself “more than anything,” as she put it.

It may sound like a cliché, but it’s true. She has long been dedicated to this catchy slogan even before its creation. Her firm commitment to it shows as she arrives at the studio right on time for our cover shoot at 9:00 a.m. on a sunny Wednesday. Just as everyone’s waiting to pump up on caffeine, she lights up the room and greets each of us a “good morning.”

Accompanied by her charming Maltese named Señor, she’s wearing a casual white ensemble that she matched with a sleek low bun and a radiant smile that hints she’s kicked off her hump day earlier than the rest of us.

“A good day for me is when I start early,” she tells PhilSTAR L!fe. Needless to say, it’s one of those days.

For Lovi, life has been quite like browsing through the television between channels, with glimpses of various happenings here and there. The local adaptation of the Korean drama Flower of Evil, where she stars as one of the lead characters alongside Piolo Pascual, is now streaming. The poster for her new series Sleep With Me with Janine Gutierrez has just been released. She also has another project coming soon, and then another one, and then another one.

Amid all the good kind of crazy, she manages to squeeze workout into her busy days.

What’s the secret, Lovi? “Oh, I make time,” she says with an expression that signals it’s no easy feat.

On the regular, her schedule begins as early as 4:00 in the morning. She hops on the treadmill, engages in other physical activities, and spends her “me time” by 4:30 a.m. For a self-proclaimed introvert like her, this is a must as it sets the tone of her entire day.

Of course, like any other human being, there are moments when she would find it too difficult to get out of bed. “I have a lot of days like that but I get up anyway because ang habol ko is the feeling after.”

This is where the importance of having a “workout regimen” that works for her comes in. “I think I just enjoy everything because I work out with a good trainer as well who makes me laugh while I lift heavy weights at the same time.”

Among her favorite activities at present are boxing, pilates, and running. Be it on the treadmill or on the road, Lovi has long found the most joy in running. “When I travel and I visit a new place, a new city, that’s the first thing I do in the morning—I run around and explore it.”

'Thank you for planting my dreams': Lovi Poe thanks GMA ahead of her move to ABS-CBN

At this point, you’re probably curious: does she follow a diet? Interestingly, she eats everything she wants. “When I say everything, I eat everything,” she says with a laugh, confessing her immense love for carbs like cakes, kakanin, and ube pandesal.

Lovi believes that diet is so much more than the food she consumes. “I believe in intake in terms of energy—the energy of people around you. Surround yourself with the right people. I think that’s also the kind of ‘diet’ you should have.”

Strength and beauty, inside and out

While some think of it as a punishment or a chore, the actress has always loved working out. In her high school years, she would routinely do sit-ups, pointing to pop icon Britney Spears as her first fitspiration. When she entered her 20s, she decided to get serious with it and make it part of her daily life.

It was also around that time she was still coming to terms with her body. When she was just starting out in showbiz, her flat chest used to be the subject of criticism. “There will be a lot of voices kasi. A lot of people will tell you that you should be thinner, you should gain more weight,” she recalls.

“I’ve even had this conversation before na ‘Oh, you’re not gonna make it kasi wala kang boobs.’ You know? Someone’s gonna tell you, ‘Oh, have it done.’”

“But at the end of the day, you have to make sure that you’re happy with yourself kasi everything else is just noise. When you wake up in the morning, you’re happy—I think that’s the most important part. And if you know that you’re actually making the effort to take care of yourself, then I don’t think there’s gonna be any problem,” she continues.

It took a while for this realization to come for Lovi, who admits she could be stubborn at times, too. Aside from her physique, she also used to get bashed for her morena skin. “When I started, they’re like ‘Magpaputi ka.’ Daming ganyan! And then I was like, ‘Why? Bakit ako magpapaputi? This is my color.’ Nareprimand ako before because ganun ako sumagot,” the local star shares.

It's a no-brainer that when the topic of the Philippines’ hottest celebrities comes up, Lovi now crosses the minds of many. But above all, she strongly highlights the power of being her most authentic self. “You don’t have to be like everyone else because everyone has their own type of beauty. It doesn’t necessarily mean it has something to do physically, so just be who you are.”

Perhaps what makes her star power remain is such mindset she’s had for over 17 years now—the same thing that’s been keeping her at her best in an industry that’s equal parts fun and challenging. 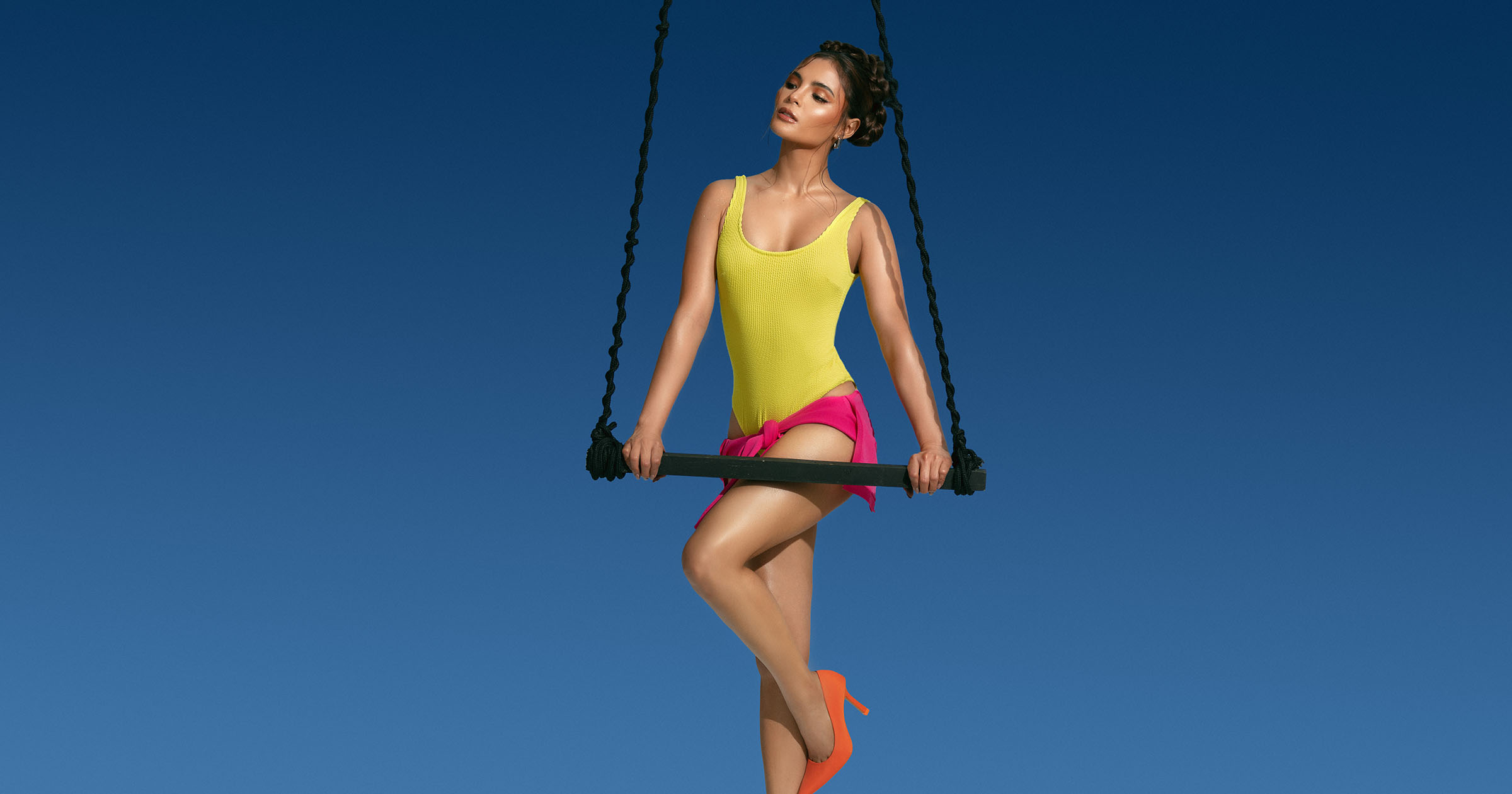 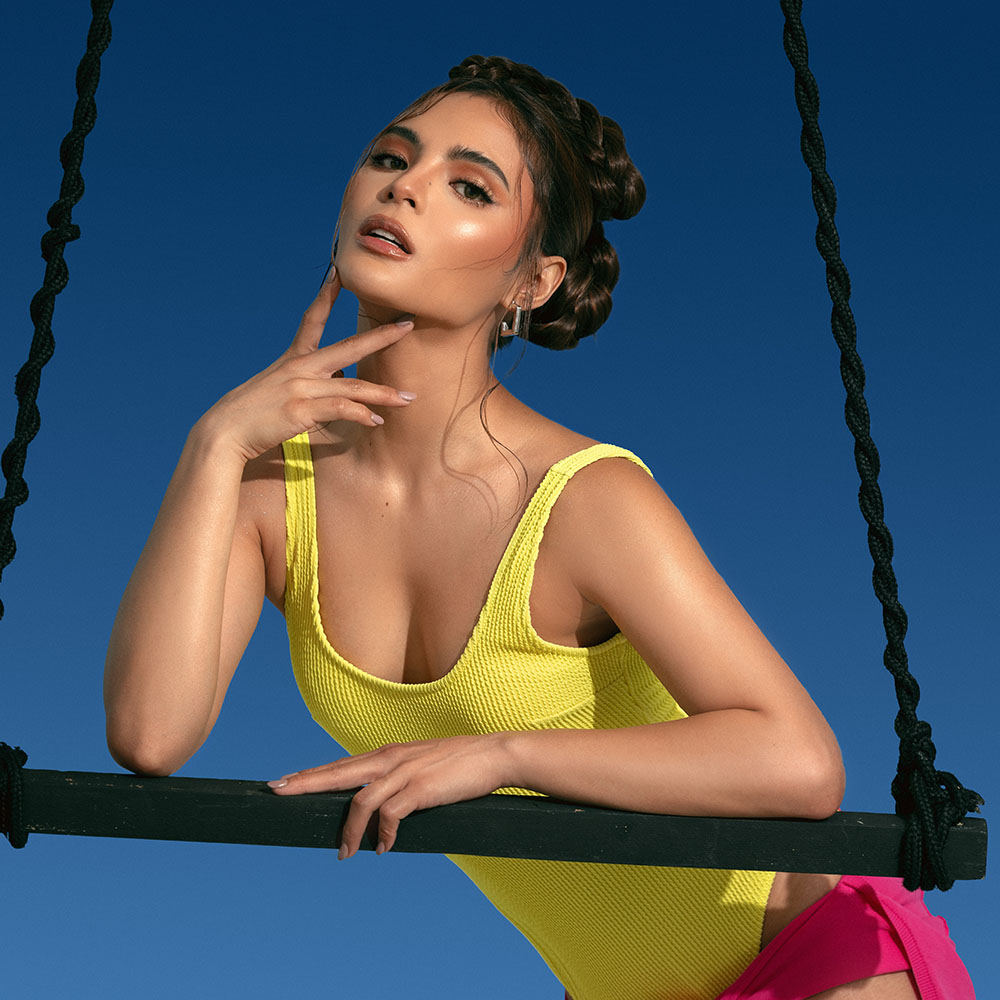 Her role as Iris Del Rosario on Flower of Evil, for example, took a lot of work since it’s her first time to portray a detective agent and policewoman in a show. “Usually, when I do TV series or movies, it’s either I play someone who’s like the ‘emotional’ girlfriend or the ‘emotional’ mistress. But this time, I play a policewoman, so physically, mentally, emotionally, parang talagang nakakapagod siya but very fulfilling at the same time kasi nga, hindi siya yung klaseng story na makikita mo kung saan-saan lang or mapapanood mo kung saan-saan lang.”

Sleep With Me also brought her out of her comfort zone as it’s a queer love story, where she gets to be Janine’s love team partner. “When we actually watched some parts of it, I was majorly kilig sa amin ni Janine. Kinilig talaga ako sa isang scene namin,” she shares. “It’s nice kasi nga we get to explore these kinds of characters and I think this is something we should normalize so I’m happy that somehow I get to use my influence in a certain way like this.”

With a life as colorful and thrilling as Lovi’s, I can’t help but get curious: “How’s your heart?”

She has been with her scientist-film producer boyfriend Monty Blencowe for about four years now. Huge chunks of it are spent long-distance as he’s based in Los Angeles, but they are going strong as ever. “I think importante kasi na we support each other as well, we don’t smother each other, we let each other be,” she explains.

“The trust and respect is there, number one. We don’t do anything that would make the other feel disrespected. I think ‘yun yung importante—initiative sa part mo. There are certain things you don’t have to say, kusa nalang ginagawa and thank God, he’s like that and I guess, so am I.”

“How about your heart in general?” I quickly ask.

"At the end of the day, you have to make sure that you’re happy with yourself kasi everything else is just noise."

Consistent with what she radiates, she unhesitatingly stated she’s very happy. “Of course, there are certain other little things that may bother us on a day-to-day basis, but at the end of the day, those are just small things.

“There are certain things you don’t really have to dwell on, but overall, I’m very happy because I have a wonderful career, I have a great partner, support system, my team, family—I can’t ask anything more.”

What’s next for Lovi? She puts her hands together and gives a contented smile. “I guess I just wanna keep pursuing my goals and have everyone around me, still, as I go on.”

This is me, Mimiyuuuh: The social media star gets serious about being queer and the family breadwinner

Brooke Villanueva is a lifestyle journalist with a focus on food and travel. An MBA candidate at the Ateneo Graduate School of Business, she has earned a special diploma in the fundamentals of business from Harvard Business School. Follow her on Instagram at @itsbrookevillanueva.