Does Winwyn Marquez still have plans to join another beauty pageant after winning the 2017 Reina Hispanoamericana tilt? Specifically, does she still want to join the Miss Universe pageant?

This is what her fans and followers want to know, apparently, after she posted a video of herself during the swimsuit portion of the 2017 Reina Hispanoamericana pageant, which was held in Bolivia, on her Instagram account.

“People have been tagging me non stop sa video na to' so might as well post it on my feed. Oh how time flies. Thank you sa nag video,” she wrote.

Many of the comments on her post expressed their hopes for the beauty queen-actress to represent the country in the Miss Universe pageant. “Gorgeous. Next Miss Universe,” one commenter said. “The real Latina slayer. Hope you join (Miss Universe Philippines),” said another.

Winwyn, however, dashed the hopes of those wanting to see her on the Miss Universe stage.

Replying to one Instagram user who asked if she can still join Miss Universe, Winwyn simply answered: “No na.” 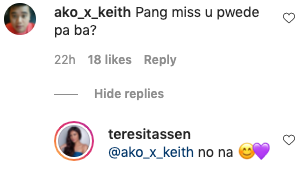 Winwyn first joined the pageant scene as a contestant in the 2015 Binibining Pilipinas pageant, where she landed in the Top 15. In 2017, she joined the Miss World Philippines, where she was won the title Reina Hispanoamericana Filipinas. The actress-beauty queen is the first Filipina to join and win the said international pageant.