Wonder Woman 1984, the second installment in the DC franchise, is set in the decade I remember fondly for its MTV videos, the phenomenon known as Madonna, and British New Wave, which permeated both music and fashion.

But while WW84 gleefully pays tribute to the Eighties’ over-the-top, garishly colorful aesthetic, Wonder Woman Diana Prince (played by the ravishing Gal Gadot) somehow manages to avoid the football-size shoulder pads and neon colors rampant during the era. In a crowd of Valley girls, she stands out like the immortal goddess she is.

“(Director) Patty (Jenkins) and I did have a very distinct attitude for the way we wanted Diana to look,” explains Gadot in an interview for SiriusXM. “The Eighties can be super poppy and colorful with the shoulder pads and everything, but if you go too much, it can become campy.”

Hemming took inspiration from ’80s couturiers and icons like Brooke Shields to design outfits like the white gown Diana Prince wears to an event. It’s slit up to there, exposing acres of Gadot’s legs, but still manages to retain mystery and class.

Hemming refers to the look as “the goddess garment,” made of heavy double silk crepe and inspired by Chanel… or was it Dior?

“I wanted her to stand out like a shaft of light,” Hemming told Margaret Gardiner of www.goldenglobes.com. “We explored so many evening dresses — none of the metallic ones of the period seemed to be right for her character. They seemed to be too on-the-nose. I referenced Chanel, Calvin Klein, and Claude Montana to create that kind of classic American look.”

Gadot remembers it a bit differently: “The white dress was a dress that Lindy had found a reference from a Dior fashion show back in ’84. So, we literally just, like, completely mimicked the dress and made some alteration.” 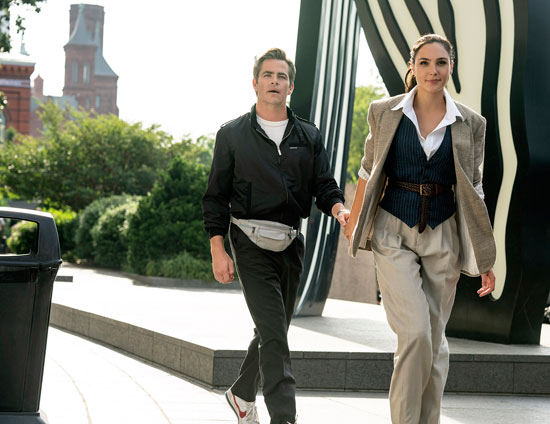 Gadot says her entire look here pays homage to Ralph Lauren and American designers. “That was a Brooke Shields ad for Ralph Lauren that I found, and then we made the adaptation for ourselves. We made everything except for the waistcoat. We were searching for an item to finish the look, and someone found the Ralph Lauren waistcoat, which was perfect. The rest of the costume is made by us. It is slightly Annie Hall.”

Regarding his outfit, Chris Pine told GoldenGlobes.com: “I have to credit Patty Jenkins for wanting that look. When he is in the collage sequence, dressing in all those outrageous ’80s clothes, she just wanted him to end up in a more timeless — but still ’80s — classic look. Kind of Nick Hayward. He has to spend most of the film in this costume, after all.”

Whether you believe Hemming or Gadot about the provenance of the goddess gown, there’s no doubt about who provided its star accessory:  Tiffany & Co. The jewelry house’s legendary designer Elsa Peretti crafted a sinuous cuff out of precious metal that is reminiscent of Wonder Woman’s own bulletproof bracelets.

“Elsa Peretti’s Bone Cuff is still, to this day, the most stunning piece of jewelry I’ve ever seen,” Patty Jenkins, who directed both Wonder Woman installments, told Tiffany.

In an Instagram caption touting its Bone Cuff, Tiffany & Co. said, “Introduced 50 years ago, the groundbreaking Elsa Peretti cuff also alludes to the designer herself. Much like the superhero in Wonder Woman 1984, Peretti’s trailblazing aesthetic is bold and powerful, yet feminine and unpretentious.”

So indelible was the cuff that Gadot’s stylist, Elizabeth Stewart, turned to Tiffany & Co. again for the virtual premiere of WW84 in China, accessorizing Gadot’s “red-carpet” outfit with cuffs of a different sort: Tiffany’s lobe-grazing diamond ear cuffs, which went smashingly with her red Valentino gown.

The navy ensemble with cheetah shoes

What if your workmate looked like this? This smartly tailored ensemble is an example of what Diana Prince wears to her job at the Smithsonian Museum and what she has on when she helps new employee Barbara Minerva (Kristen Wiig), who spills the contents of her briefcase on the floor. 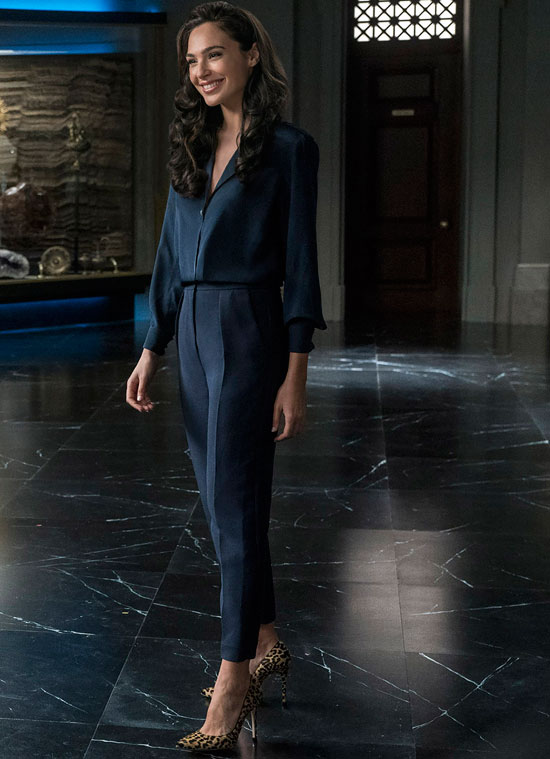 “The shoes spark the imagination of the ‘Cheetah’ in Barbara, Kristen Wiig’s character,” notes Hemming. “In the scene, she looks at Gal’s shoes — she thinks she’s looking at this impossibly elegant and classically dressed person, and then she looks down and sees these fantastic heels which she herself is unable to wear, and they inspire her at that moment when she’s desiring to look like Diana Prince.”

According to Hemming, the stilettos were made by a company called Gina, an LA-based shoemaker she often works with that has now expanded to New York and Paris.

“One of my favorite outfits is the simple blouse and trousers,” Hemming continues. “They are made of the most expensive fabric, silk crepe. The trousers have a really good drape to them, a lot like an Armani of the period would have. The shirt comes from an ’80s pattern.”

Aspiring to feel as free and look as sexy as her idol, Diana Prince, mousy Barbara Minerva finds her inner vamp and wears this hot LBD to a Smithsonian gala — symbolically the black antithesis to Prince’s white goddess gown. 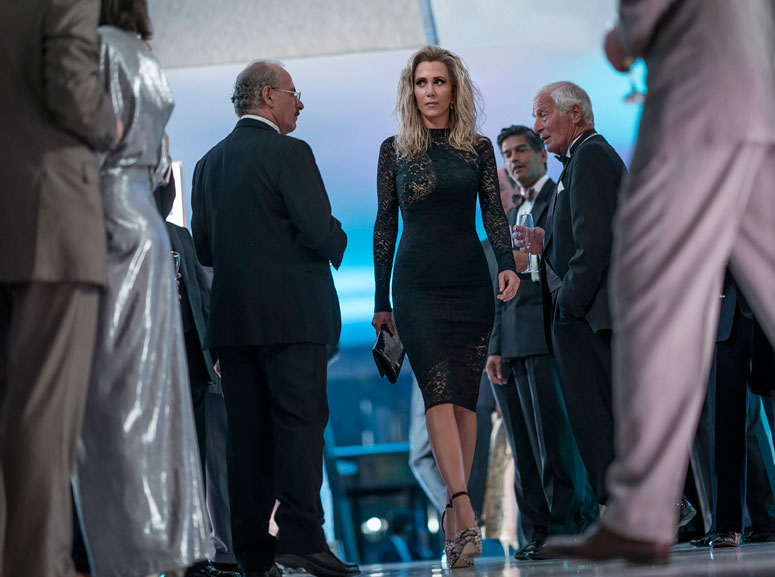 “We wanted something that would really show her body off,” Hemming says. “It was black because she started toward the darker, punkier side of her character. We were channeling Azzedine Alaia and his body-contouring designs and, of course, tough, punky girls and a bit of Madonna. At that time, there was a big exhibition of body-conscious clothing at the V&A Museum in London. In terms of tightness and the elasticity of the fabric, it was not an expensive lace because none of the expensive laces would contour so tightly to her body. It ended up being something far less expensive but something that had a great stretch to it.”

Having gone beyond idolizing Diana Prince to wanting to be her, Barbara Minerva makes a wish on a mysterious citrine stone to become an “apex predator” and this outfit shows her evolution into Wonder Woman’s arch-nemesis, Cheetah. 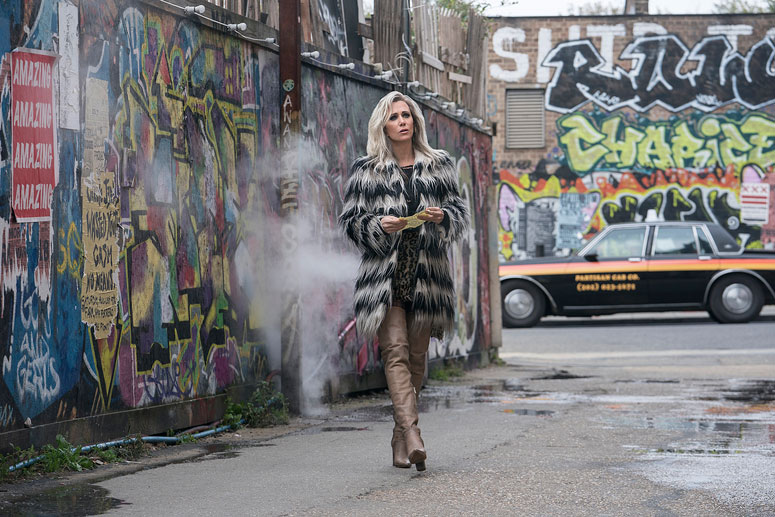 “Kristen Wiig, fake fur, and thigh-high boots,” Hemming says. “She has gone mad by then. The jacket shows an animalistic feel coming over her. She has torn tights because she has been running around outside in the dark. We’re meant to get the definite feeling that she is disturbed by then. The jacket is just a nylon fake fur, picked for fabric. It is very right for the later ’80s. The boots are by Gina Shoes that made fantastic footwear for many films for me.”

Chris Pine’s getup here epitomizes the “so bad it’s good” vibe of the ’80s. He brings to mind George Michael in Wham, or does anyone remember Limahl of Kajagoogoo? 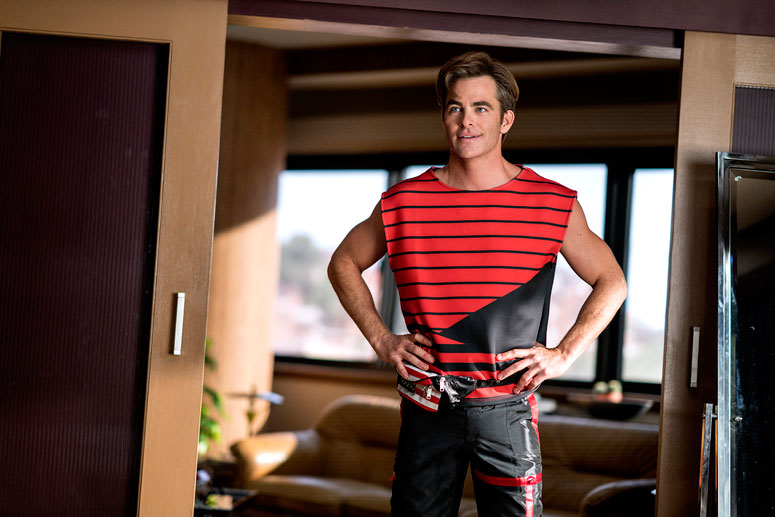 Pedro Pascal plays Maxwell Lord as a megalomaniacal businessman with perennially bad hair, so I thought he was channeling Donald Trump, but apparently, he was inspired by another film character from the ’80s. 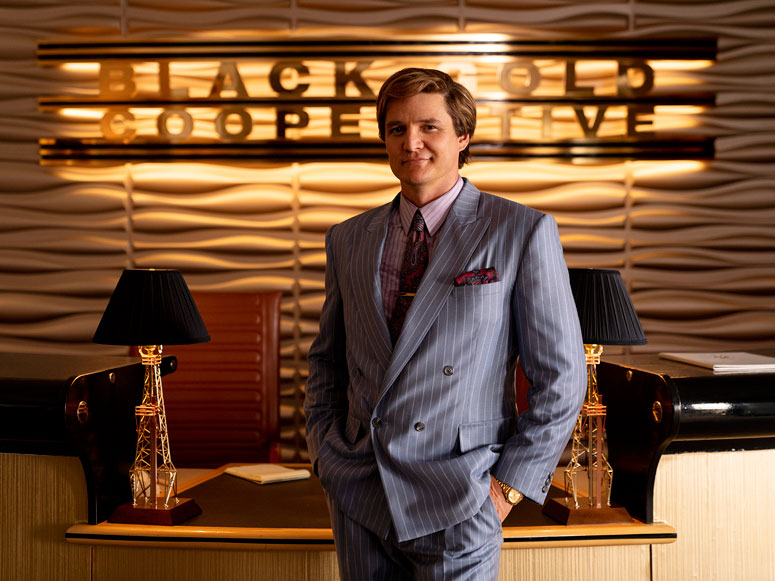 Hemming relates, “While many may wonder if Donald Trump was the inspiration for Max Lord’s look, Pedro Pascal clears up the confusion: ‘I thought it was a Gordon Gekko look, but Patty said, ‘It’s not one thing.’”

Whether Lord strikes you as more Trump-ian or Gekko-like, they all have one thing in common: the padded shoulders, a sure sign that you’re back in the ’80s.