Style Living Self Celebrity Geeky News and Views
In the Paper Shop Hello! Create with us
@heidiklum and @amazonprimevideo on Instagram, screenshots from Entertainment Tonight

There’s no doubt that supermodel and TV host Heidi Klum is the Queen of Halloween, with her show-stopping costumes and highly anticipated grand annual parties attended by A-listers that spanned two decades.

Klum started hosting Halloween parties in 2000 after she attended several parties in New York a year before and thought she could host better parties herself.

“When I moved to America, I immediately fell in love with Halloween and the spookiness of it. All that was missing was a fantastic party. It felt like a real opportunity for me,” she told the Hollywood Reporter.

On her first party, Klum dressed as a goth dirndl queen and every year since then, she went all out with her costumes—from Shrek’s Princess Fiona to a gory alien. This made her win not just Halloween but also the hearts of spooky season lovers.

Unfortunately this year, just like last year, Klum has canceled her annual party due to the rising COVID-19 cases, saying that she felt it would be insensitive to hold her annual fete considering what is happening in the world.

The best Halloween costumes in 2021—so far

(In 2012, when Hurricane Sandy pummeled New York City in late October, Klum postponed her Halloween party to a “Haunted Christmas” in December.)

"With everything happening in the world right now, I feel like it's still too early for me to feel okay having a party," she told TooFab. “I don’t want anyone to get hurt because of we’re having fun on my dime so I don’t want to do that.”

However, that doesn’t mean that the Making the Cut host is canceling her own celebration of Halloween. In fact, Klum has been posting teasers including behind the scenes of what seems to be a Halloween video treat for her fans.

At the start of October, Klum also started posting clips of her previous Halloween soiree and costumes.

What could be her Halloween costume this year? We’ll for sure find out soon. As we wait, let’s look back at the most iconic costumes so far of the Queen of Halloween, Heidi Klum.

For the 20th anniversary of her Halloween bash, Klum went all out and came up with an over-the-top concept inspired by Tokio Hotel, the band of her husband, Tom Kaulitz, who she said believed in the existence of aliens. They started conceptualizing the costume in November 2018.

Klum also gave fans an opportunity to watch her prepare for her prostheses-heavy costume in an Amazon Books shop window.

She and her husband, whose complementary costume was a bloody astronaut, arrived at the party venue in a “biohazard” truck and both stayed in character all throughout the night.

It was the first time that Klum cancelled her annual Halloween bash but she did go extra with her costume, at the comfort of her own home.

For 2020, she had two costumes. First is camouflaged by a wood-paneled wall and second is on a marble-styled bed. In both looks, she had full body paint on and showed clips on Instagram how her makeup was applied by her team who were all masked-up and socially distanced.

As a nod to one of the late “King of Pop” Michael Jackson’s biggest hits, Klum with her friends recreated the music video of Thriller on the streets of New York. She wore a nearly identical outfit and danced the famous choreography in the music video.

Klum considers this costume one of her best, and we can see why.

First, she arrived at the party venue in a giant wooden crate box that said “Made in Germany” (Klum is German for those who may ask). And then, it was revealed that inside the box was not only Klum but an army of Heidi Klum clones. (If you blink once, you would have to scan through the clones to see who the real “Heidi” was in the firing squad.)

With the makeup, outfit and prosthetics (Klum had to Lifecast her face for the “clones”) used for the costume, she reportedly spent over $10 million for it.

This costume is perhaps one of the most iconic among Klum’s looks for Halloween, inspired by a character in Who Framed Roger Rabbit?

Klum was barely recognizable when she revealed her costume to the public.

According to reports, she spent almost 10 hours to get in the costume, starting with prostheses, red wig, heavy makeup and that iconic figure-hugging red dress.

Klum was entering her forties when she decided to dress up as “a little old me” during Halloween.

In her very detailed costume were varicose veins, crepey skin and sagging décolletage. Klum, with her silver hair, arrived at the venue with a cane and a nude leather bag. 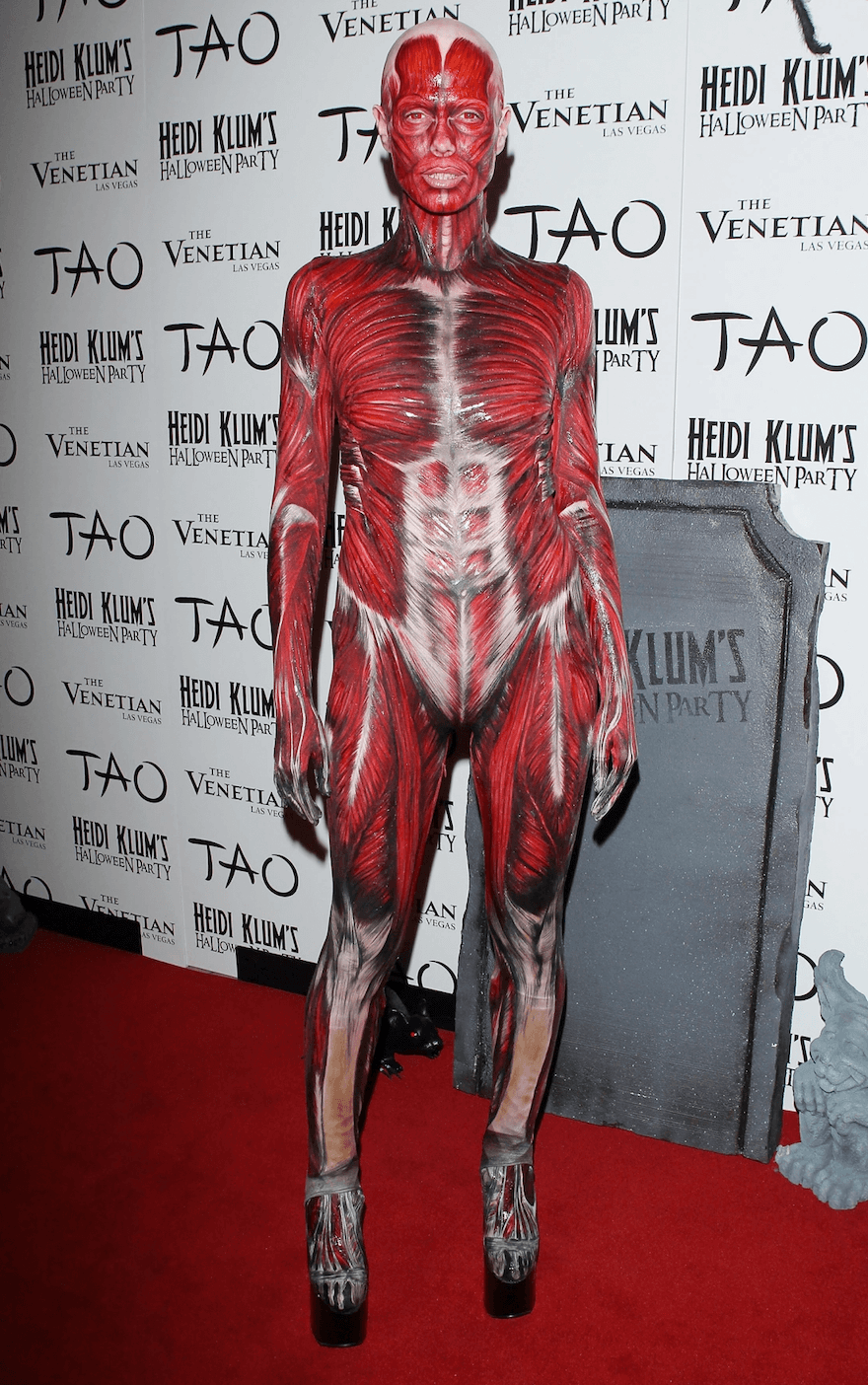 The creeps in this costume were intense as Klum arrived at the party venue being wheeled out on a gurney by two bloodied “surgeons.”

In 2011, Klum had two Halloween parties, in the first one, she wore a matching Planet of the Apes costume with her then husband Seal. 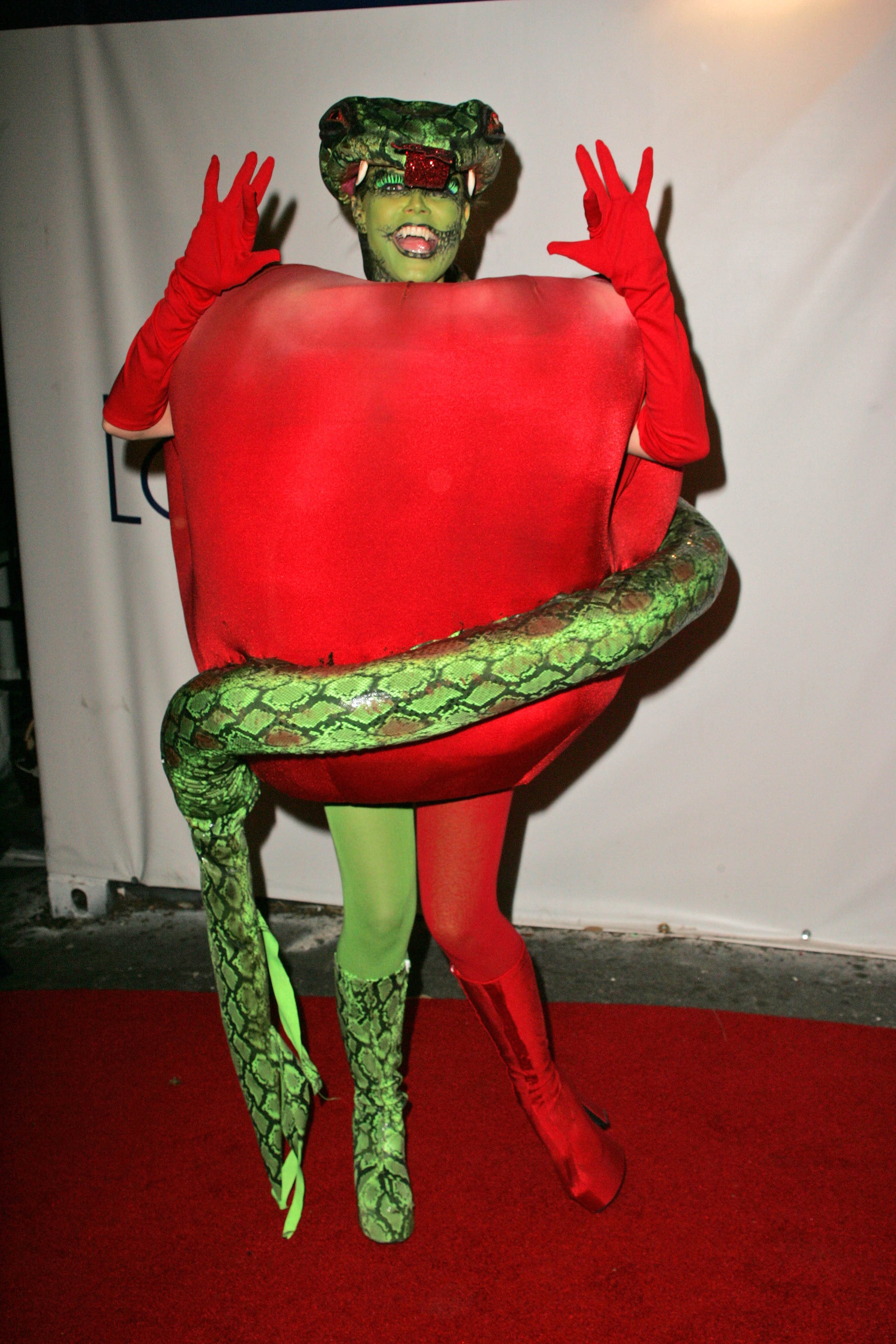 In an interview with Entertainment Tonight, Klum said her giant apple costume that year was conceptualized to conceal her nine-month baby bump. She walked her party’s red carpet in platform snakeskin boots and a giant fake snake wrapped around her. Her then husband, Seal, came with her as Eve.

A few weeks after the party, she gave birth to their son, Johan.

The best new Swiss watches for 2022