As expected, pageant enthusiasts and casual fans alike are already putting in their two cents about the recently-concluded national costume competition of the 69th Miss Universe pageant. Rabiya Mateo came out wearing a Victoria’s Secret Angel-like outfit inspired by the Philippine flag, while delegates of other countries such as Myanmar and Singapore used the Miss Universe stage to deliver powerful, political message.

Before the show, the 27-year-old beauty and TV host expressed her support for Rabiya, asking her followers to pray for the Philippine delegate.

“Friends! Let's send prayers up for our very own Ms Philippines #RabiyaMateo tonight as she prepares for the Closed Door Interview and National Costume show for Miss Universe,” she said.

Friends! Let's send prayers up for our very own Ms Philippines #RabiyaMateo tonight as she prepares for the Closed Door Interview and National Costume show for @MissUniverse ?? happening in the next 24hrs!! #AribaRabiya ?

She tweeted that the national costume competition is one of her favorite parts of the Miss Universe pageant as it “showcases diverse and rich cultures.”

“Will always wonder...how did they fit these huge, larger than life costumes in their luggage?!” Catriona also quipped, perhaps as a reaction to the large and over-the-top costumes worn by the candidate from Malaysia.

Indonesia, Nepal, Peru, Thailand, Ukraine and Vietnam were my Top 6 @missuniverse National Costumes ? Who were yours? ???

She also noted Bernadette Belle Ong of Singapore’s look, whose costume had the message “Stop Asian Hate” written on her cape.

Catriona noted that her picks are her favorite costumes; they are not based on the performance of the candidate. “I love the celebration of culture and a country's expression of identity which is why its one of my favorite segments,” she tweeted.

Rabiya did not make it to Catriona’s list of favorites. But the Miss Universe 2018 winner praised Rabiya's performance in the national costume segment.

In her Instagram post after the national costume, Catriona commended Rabiya, saying “20++KGS but Rabiya Mateo carried it with such strength.”

She added, “if this is an insight to her level of performance, so excited for prelims.” 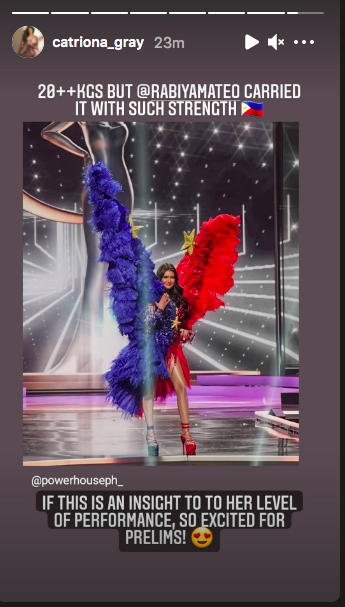 Catriona earlier addressed comments by fans that she has not been supporting Rabiya publicly on social media. "I’m a Filipina AND a Miss Universe. It’s a celebration of women from all over the world," she said.

“I’ve reached out to (Rabiya Mateo) throughout her journey privately,” Catriona added. “Not everything is on display on social media,”

You can buy the 'Agila' Barong Tagalog that Team Philippines wore to the 31st SEA Games for P20,000