Physical beauty is often overrated. Although we’re not dismissing the age-old saying that beauty is its own excuse for being, without a good head to go with it, one’s looks can only go so far. On a more practical note, how many times have you had a crush on someone only to see it evaporate once that person begins to open his or her mouth?

Put differently, how many times have you been drawn to a person because of what he or she says or espouses, regardless of how lucky (or unlucky) that individual is in nature’s genetic lottery?

Sending someone as brilliant and as principled as Malala Yousafzai or Greta Thunberg to Israel to compete this December in Miss Universe is certainly furthest from the minds of people behind Miss Universe Philippines (MUP), but neither do they want to send someone as clueless of history and as insensitive of other people’s feelings like some singer-turned-YouTube star out there.

MUPH 2021 bets to go for poverty alleviation, corruption-free government if given the power

And since a country’s beauty queen, it seems, not its president, has now become the embodiment of her people’s best and brightest, MUP is duty-bound to send someone who’s exceptional in front of the mic as she is in high heels and a pair of the skimpiest bikinis.

Pageant fans recently got to further probe into what and how their respective bets think, as each of the 28 MUP finalists answered five surprise questions designed to test their wits, gauge their charm and confidence, reveal their values and challenge their command of English: 1) What’s the most important lesson you learned in the past week? 2) If beauty is in the eyes of the beholder, in whose eyes are you beautiful? 3) If we truly learn from our mistakes, would you advise a young person to keep making them? 4) If you have the power to do one of the following: Eliminate poverty and hunger; A government with no graft and corruption; Or solve all environment problems, which would you choose?

The fifth question, from Lazada, one of MUP’s main sponsors, asked the girls a seemingly simple question that was bound to elicit a revelatory answer: 5) If you were to add to cart one item to buy on Lazada to send to all Filipinos to help inspire them during this time, what would it be and why? 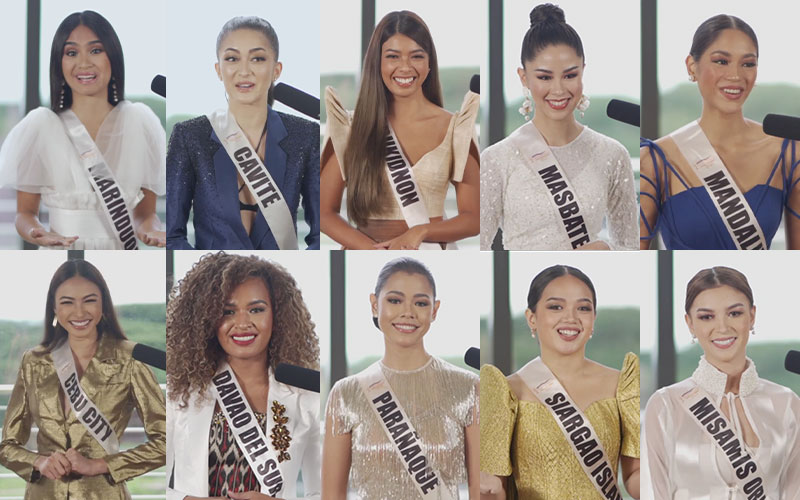 Depending on whom you asked, what made the live interviews either more nerve-wracking or exhilarating for many of the girls was the fact that they only had 30 seconds to form a coherent answer for every question.

A default answer to Question 2 was either mother or God, which wasn’t bad in itself as long as you can justify it, which a good number of candidates were able to do. What I found really impressive though were those, most notably San Juan’s Rousanne Marie Bernos and Masbate’s Kirsten Delavin, who were both bold and unapologetic enough to see and appreciate their beauty, and validate it through no one else but themselves.

how can you even begin to solve these gargantuan challenges if you don’t first address the root of all issues, which, in the Philippine experience, has always been graft and corruption.

It came as no surprise to not a few observers that many of those who zeroed in on graft and corruption as the country’s main problem were also among the most intelligent and most sensible of the lot. The likes of San Juan’s Roussane, Pangasinan’s Maureen Wroblewitz, Albay’s Janela Joy Cuaton, Siargao Island’s Michele Angela Okol, Marinduque’s Simone Nadine Bornillaand Misamis Oriental’s Chella Grace Falconer hit the nail on the head by seeing and pointing to the big picture.

To see is to believe

But to see (and hear) is to believe. To give you an idea who among this current crop of hopefuls possess the most beautiful minds, here’s my list of the Top 10 in MUP’s preliminary interview round and their corresponding quotable quotes. Take note that the Top 3 finishers are interchangeable.

Based on their previous Q and A performances, it was a given that Siargao Island’s Michele and San Juan’s Rousane would do well. Both ladies are eloquent with totally different styles in terms of processing questions and delivering them. But one of the evening’s biggest and most pleasant surprises was Albay’s Janela Joy’s performance—short, sweet but substantive.

After appearing too strong and too American during her first Q and A outing, a toned-down Taguig’s Katrina Dimaranan was able to connect this time around by coming up with clear and insightful answers. As for Marinduque’s Simone Nadine, she was clearly feeling the nerves this time, but for someone so young, this 18-year-old never ceases to impress pageant fans with her depth, intelligence and maturity.

Say what you will about Masbate’s Kirsten, aka “Kisses”, but this girl could speak her mind out while charming the socks off anyone. The final two placers, Misamis Oriental’s Grace and Isabela’s Jan Louis Abejero, deserve special mention for being revelations, as these two girls did better than most pageant fans expected now that the contest is entering the homestretch. Where have you been all this time?

1) Siargao Island (Michele Angela Okol) On Question 4: “I would definitely choose the second, a government with no graft and corruption, because they could touch on both of the issues mentioned. They can help the environment by allocating enough funds. And they can also help the people by being fair and being just.”

2) San Juan (Rousanne Marie Bernos) On Question 2: “I think I am most beautiful in my own eyes because only I get to see the fullness of Ayn Bernos. My lows, my highs. And I think through it all, I’ve really proven to myself that I own my beauty, and I’ve learned to embrace that kind of beauty. And I think I can say to myself that I’m beautiful.”

3) Albay (Janela Joy Cuaton) On Question 3: “Yes, definitely. You will never learn in life if you continue to be complacent and not try things that you want to do. You will never know what you’re getting unless you try it. With failing, you can only learn and grow from it. Also remember, you can fail, you can be broken a lot of times, but if you don’t growand you don’t reassess what’s happening with you, it’s pointless.”

4) Taguig (Katrina Dimaranan) On Question 1: “The most important lesson I’ve learned in the past week would have to be the ability to adapt and stay patient. As you know, there are so many things changing around us. Not only outside of our bubble here in Miss Universe Philippines, but also in our nation. Especially during all our activities where we have sponsor shoots, we don’t know our call times. All of the scheduling that we have to do, it’s important for us women to adapt to whatever is thrown at us. And also to be patient and know everything happens for a reason.”

6) Masbate (Kirsten “Kisses” Delavin) On Question 2: “In my own eyes. I always make sure every day, when I go out, when I’m doing my own makeup, that my standard of beauty is myself. We all have our preferences of what’s beautiful, but I think that I’m beautiful because I am me. And if I could show a girl that she could feel like that as well, that’s something that I would be proud of for the rest of my life.”

7) Parañaque (Maria Ingrid Teresita Santamaría) On Question 3: “I think you need to make mistakes in order to learn from them. So I would say to a young person, if you make a mistake for the first time, that it’s okay to learn from it. And the best thing to do is to move forward and become better.”

8) Marinduque (Simone Nadine Bornilla) On Question 5: “As cliche as it may sound, I would love to add to cart a mirror. Especially with the advancement in social media, oftentimes, we forget who we are because we try to project this person, this ideal person. So, we forget our flaws and everything else. That’s why with this mirror we can remind ourselves.”

9) Misamis Oriental (Chella Grace Falconer) On Question 3: “I think it’s okay to make mistakes. Two, three mistakes. But if you keep repeating them, it is no longer a mistake. It is a choice. So I do think that we should not be repeating mistakes. We should learn from them. Because when we learn from our mistakes, once we learned the lesson, we become better individuals.”