Who would think that strong, padded shoulders would make a comeback after they were used and abused during the ’80s, when even T-shirts would have Velcro linings to attach one, two or even three layers of foam? It was such overkill that no one ever wanted to see them again during the minimalist ’90s.

And yet, here they are again gracing the recent fall couture runways. They have actually been creeping in for the past three years with the revival of ’80s looks. Is it the pandemic effect that they mimic a form of armor to offer security and protection? Or after lockdown lounging, is there an urgency to come out of the cocoon in a scene-stealing, assertive silhouette to start normal life anew with conviction?

Shoulder pads were used as protection from injury for football players in the late 1800s, although padding in shoulders was used in royal court as early as the 17th century and in the 18th century for military uniforms.

In the colonial Philippines, there was a focus on the shoulders in the traje de mestiza attire, where the pañuelo (fichu), together with the bell sleeves, created an armor of translucent layers that could deter a prospective suitor from even attempting a kiss. As a form of protection and to discourage men even more, the pañuelo was attached with pins, which acted as additional weapons of defense.

At Ternocon 2020, Lesley Mobo had his updated versions of empowered women inspired by vintage photos of Filipinas in their baro’t saya traversing the metropolis carrying their tampipis.

In 1932, Joan Crawford wore a dress with oversized ruffled shoulders in the film Letty Lynton. Designed by Adrian, the use of voluminous shoulders was an attempt to conceal the naturally wide shoulders of the actress, who was insecure about them. Eventually, Adrian convinced her that they were actually quite appealing by emphasizing them even more with the padded shoulder look that caught on in the film and fashion world.

With the onset of World War II, the fashion trend crossed over from the glamorous to the practical, as women began to fill jobs left by men who had to join the front lines. To transition to this new territory, womenswear took on a more masculine quality, borrowing from military uniforms by using scrap fabrics or even sawdust to bulk up the shoulders.

With gender fluidity, men and women now borrow from each other’s fashions.

By 1945, in the film Mildred Pierce, Joan Crawford’s dresses had the most structured shoulder pads, befitting the role of a strong woman who, after her husband leaves her, is determined to achieve her own financial success and raise her two daughters as a single mother. It reflects the shifting gender roles that were happening in the real world.

After the war, shoulders took a backseat with the return of femininity in Dior’s 1947 New Look that emphasized the waist again. It had a resurgence in the 1970s when Yves Saint Laurent created the controversial 1971 collection inspired by the ’40s looks of Paloma Picasso, his muse who loved scouring flea markets for vintage finds. Fox fur coats with humongous padded shoulders caused a sensation that shook the couture status quo. In 1978 he would exaggerate the shoulders again on jackets over slim trousers, turning it into a major trend, catching on with designers in fashion capitals and heralding the ’80s power-shouldered look. Paris designers like Karl Lagerfeld, Thierry Mugler and Claude Montana would do a 1940s revival silhouette version, while US designers like Perry Ellis, Norma Kamali and Calvin Klein, and Italian designers like Giorgio Armani would favor a sportswear look.

With the number of working women increasing in the 1980s and the phrase “smash the glass ceiling” embodying the feminist goals of the era, there was a clamor to gain equal status with men, epitomized by Melanie Griffith’s power suit in the 1988 film Working Girls. Ann Klein and Ralph Lauren’s power suits would bring the look to the mainstream — an oversized silhouette that acted as armor to march into the male-dominated office while acting as a shield to hide the actual shape of the body as protection against the omnipresent male gaze.

By 2017 onwards, with the #MeToo movement against sexual abuse by men gaining traction, social media was used against gender discrimination and dressing up for the office was more relaxed, with broad shoulders no longer used the way they were before when women borrowed from men’s clothing to gain equality. With gender fluidity, men and women now borrow from each other’s fashions. Demna Gvasalia at Balenciaga showed shoulder pads on both men and women for FW 2019, Balmain and Saint Laurent used them to channel ’80s glam, while they provided genderless accents at Comme des Garçons and Maison Margiela.

Not all heroes wear capes, but all wear bodysuits

In the Philippines, where the abuse of padded shoulders in the ’80s is still fresh in the memory and brings a certain aversion, designers have found innovative ways to create strong shoulders through novel cuts, like the way Joey Samson does it. For his Red Charity Gala show he went even more sculptural with a one-sided installation done in collaboration with the artist Ryan Villamael. 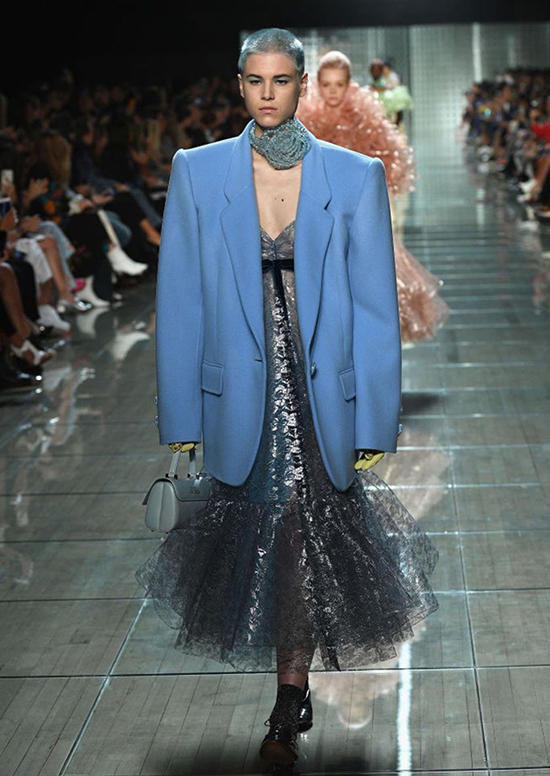 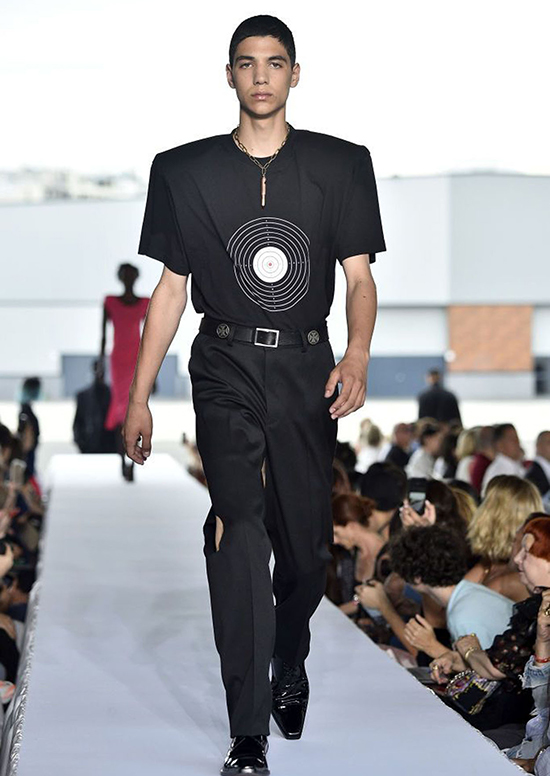 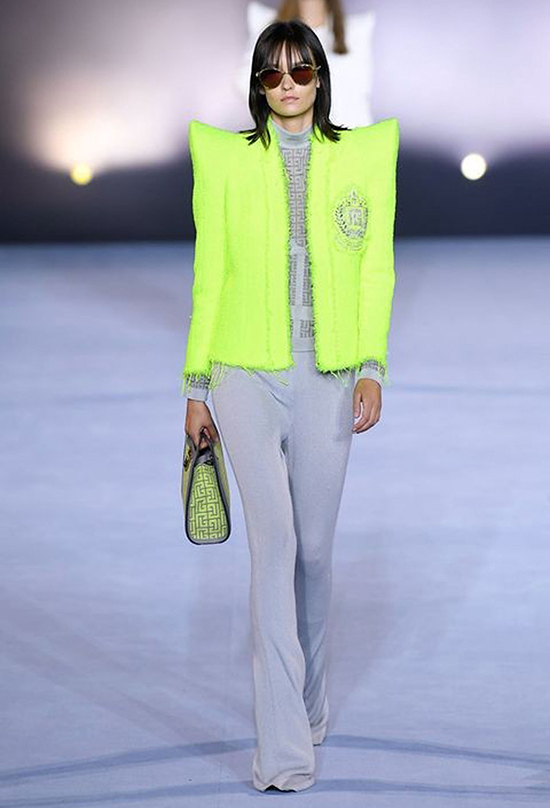 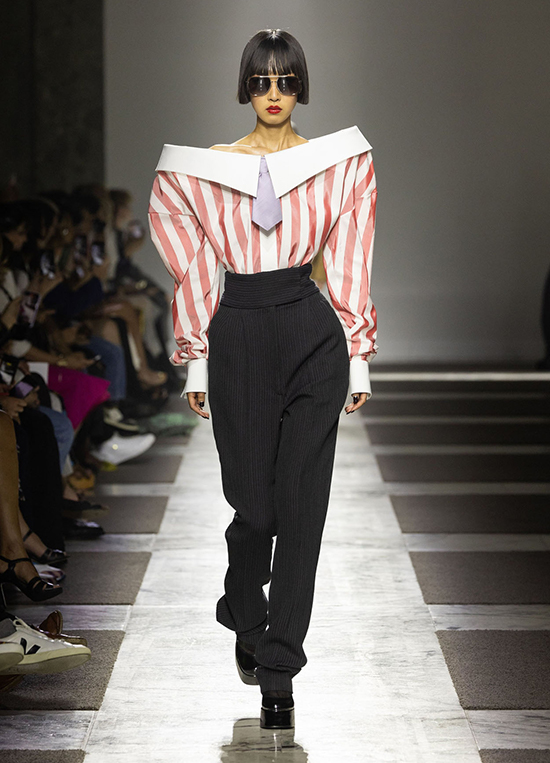 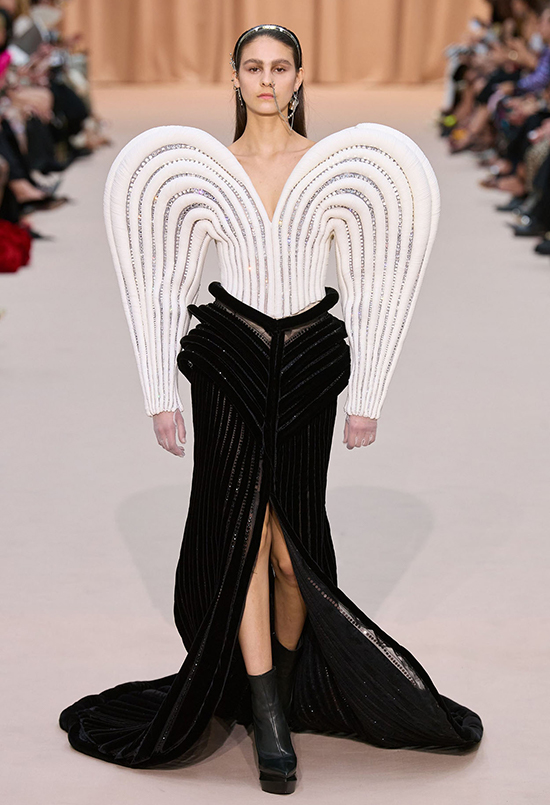 Evolving from its feminist roots, strong shoulders now embody a more personal expression that need not be labeled as feminine or masculine but reflects the complexity of the individual and his/her/their many facets.

WATCH: Bella Hadid gets dress spray-painted on her body at the Coperni show in Paris