A pretty wisp of a girl from Victorias City in Negros Occidental, who won first place at Fashion Week San Diego late last year, forecasts that power suits “will be on trend this year.”

Perhaps because women will be taking back control of their lives after the rollout of the vaccines, and even when working from home and having Zoom meetings, I would like to underscore that their duster days are over.

“Fashion pieces became more of an investment staple, which is great for the industry,” says young designer Bea Cruz.

Still, Bea thinks loungewear will still be very much in. “Because of the sudden shift in lifestyle 2020 has brought to each and every one, people will be leaning more on loungewear and easy-to-wear looks.”

Undaunted by the pandemic, and refusing to be idle because of it, Bea joined Fashion Week San Diego last October and won FWSD 2020 first place as the competition’s top designer.

She also bagged an award for the best winning team in FWSD’s annual fashion exhibition last July, the “Art and Beauty Behind Fashion.” The latter was held in partnership with Sotheby’s New York and The Art Renewal Center, and was supposed to be held in New York City. But due to the pandemic, both events were done virtually.

Every garment, every accessory in Bea’s 10-piece collection, crafted in Negros, was sent via air cargo — from Negros, to Manila then to San Diego in California. 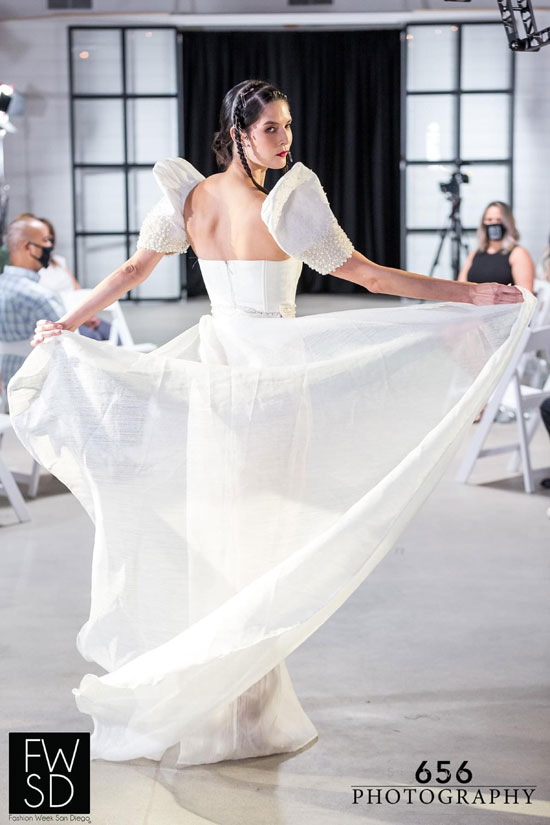 “I joined Fashion Week San Diego from Negros Occidental. I was supposed to fly out July 2020 for the Sotheby’s New York exhibition, which was eventually done virtually because of the pandemic, and October 2020 for the runway show and main event  But due to COVID-19 and its travel restrictions, I wasn’t able to be present during the show. I watched models wearing my collection walk down the runway virtually.”

How in the world did the best of Negros get to sashay down the runway halfway around the globe?

“For the qualifications, any and every designer around the world is welcome to join Fashion Week San Diego,” says Bea. “For my part, since I’m from the Philippines, I sent my designer applications to FWSD online. Then they asked for photos of my past works and social media posts. After then, I was scheduled for a phone call interview and was welcomed for both FWSD 2020 runway shows and their annual fashion exhibition in New York. And was told I was the youngest and the only Filipina joining the 2020 runway show!”

Bea belongs to a family of hacienderos.  One of her aunts is Sister Marivic Sta. Ana, the moving force behind the Laura Vicuña Foundation. But instead of going into the family business, or following in the footsteps of Sister Marivic, she decided to indulge her creative pursuits.

“When I was younger, I would specifically draw gowns but I outgrew that phase. When I was introduced to the technical side of fashion in college, most specifically pattern drafting, I became very passionate about it. Since then, I’ve always been a huge fan of any form of art, making something out of nothing. My grandmother used to embroider pieces of cloth and garments by hand, and two of my aunts used to be dressmakers, so I guess it’s familial and have it in my blood.”

What differentiates a Bea Cruz creation from others?

The 22-year-old is frank with her reply. “Honestly, I’m still looking for that ‘common ground’ with my design aesthetic and every design that I produce is kind of a learning process for me of finding a good balance.”

This young designer from Negros Occidental, who conquered a design competition in California despite her youth, shows that you can fashion your dreams into reality even from home. No excuses.

Bea has an existing studio in Bacolod City, but due to the pandemic, she has temporarily stopped its operations until “everything is safe and back to normal.” Her shop is open for scheduled client fittings only and appointments are done virtually for now.

There are no limits to one’s dreams, neither space nor time. Sometimes, we are the ones who limit ourselves and the heights we can reach. But this young designer from Negros Occidental, who conquered a design competition in California despite her youth, shows that you can fashion your dreams into reality even from home. No excuses.

Even now, Bea is already working on her collection for Fashion Week San Diego this year.

According to its website, Fashion Week San Diego is a traditional fashion week that focuses on emerging designers from around the world and San Diego. It is the longest running and the biggest Fashion Week that is independently owned and operated. “We are thrilled to be the model that so many try to imitate. We have a reputation for always being professional, reputable, the right audience and produced real results for the designer brands we showcase. Fashion Week San Diego / FWSD has been able to launch the careers of many designers and continues to grow every year.”

Banner and thumbnail caption: Young Filipino designer Bea Cruz, who topped the designers at the 2020 Fashion Week San Diego despite being the youngest participant

Joanne Rae Mayor Ramirez is the award-winning editor-in-chief of top glossy magazines PeopleAsia and Enclaves. A columnist of The Philippine STAR since 1992, she served in Malacañang as editor of the Presidential Press Staff during the administration of former President Corazon Aquino. At home, she is wife to advertising and communications executive Ed Ramirez, and mother to entrepreneur Carl Francis Ramirez.

Want to host your own TED Talk? You can apply to become a TED Fellow until June 30