Hell hath no fury like a Twitter take scorned. It’s become apparent that Twitter discourse (see: occasional petty fighting) is the sport. We’ve got the usual players, with topics on rotation. It’s become an everyday routine to ask “who are we mad at today?”

While the social media platform’s been instrumental for some good things, this echo chamber of sorts has been tiring this year — seriously, how many tweets on North vs. South can we take?

I’m not gonna lie — it’s been entertaining. Almost every day this year came with a new Twitter topic for away. Some deserved the discourse, and the rest was really just to fill the appetites of the hanap-gulo Twitter base.

And what better way to sum up the year in this (moving away from the) light, to recall the most memorable Twitter fights of the year.

DISCLAIMER: This list isn’t complete by any means. So in no particular order (as the way of Twitter life is), here are our top Twitter ganaps of 2019.

So you’re in the US and you’re craving for Chicken McDo —  except the good ‘ol neighborhood Mickey D’s doesn’t have it there. The next best thing is to tweet about it, which is what user @noel_adrin did.

For some inane reason, user @anthonyranque (who has since changed usernames) retweeted and said we should adjust to the culture of the place we’re in, and even brought up glocalization, a marketing ploy where a brand adjusts, well, locally.

The Twitter circus ensued, and @anthonyranque later tweeted that it was a “social experiment”. The poor guy just wanted his chicken…

All’s well and good, but the thing was she posted screencaps of her Facebook story, which included an approved Home Credit installment receipt. The Twitter world went crazy with that detail: how could you sign Home Credit papers while you’re drunk AF?

These are the list of blinks that spent a BIG AMOUNT OF MONEY but are not able to get the ticket they deserve :(#SHOPEESCAM pic.twitter.com/ro8Hb5bEhn

But what's more heartbreaking than having false hopes. They received a notif that they've won a ticket but it was taken back in an instant saying there's an error in their system like wtf shopee? Can't u fix everything first before sending out notifs??? @ShopeePH #SHOPEESCAM pic.twitter.com/CwSR50nUbx

Don’t mess with the stans. It’s the kind of wrath you’d rather not face, which e-commerce brand Shopee totally found out.  The e-commerce site held a contest for a chance to win meet & greet passes to their event with K-Pop group BLACKPINK over. The mechanics were simple: the top spenders would get to meet the BLACKPINK members on stage and have posters signed.

Shopee changed their terms and conditions last minute, and naturally, this didn’t sit well with the Blinks. Some fans even got a notification that they won passes, only to be messaged they actually didn’t. #ShopeeScam was trending for days, and even reached the point of fans screencapping LinkedIn profiles of the Shopee marketing team for accountability (a career-high for them, surely). 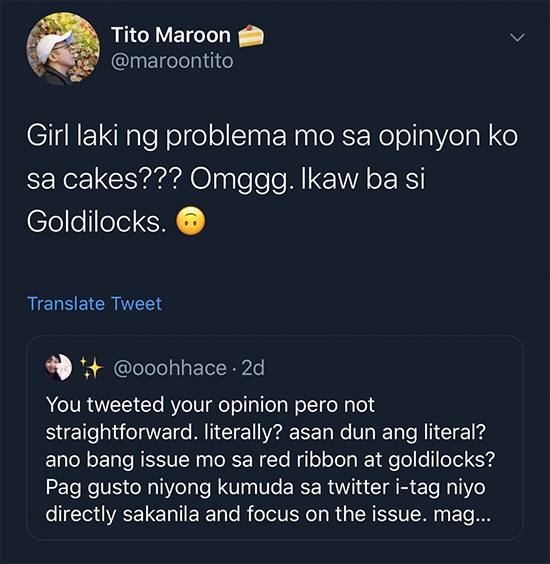 Don’t mess with the stans. It’s the kind of wrath you’d rather not face, which e-commerce brand Shopee totally found out.  The e-commerce site held a contest for a chance to win meet & greet passes to their event with K-Pop group BLACKPINK over. The mechanics were simple: the top spenders would get to meet the BLACKPINK members on stage and have posters signed.

Shopee changed their terms and conditions last minute, and naturally, this didn’t sit well with the Blinks. Some fans even got a notification that they won passes, only to be messaged they actually didn’t.

#ShopeeScam was trending for days, and even reached the point of fans screencapping LinkedIn profiles of the Shopee marketing team for accountability (a career-high for them, surely).

ATENEO HAD A LIVE VIEWING BUT BAWAL WATER BOTTLE INSIDE THE AUDITORIUM,,,, skskskskss pic.twitter.com/wX43dYF1uI

UAAP season means live viewings in universities, and basketball champion Ateneo is no exception. But what makes this viewing so very Ateneo, as user @kngperez tweets, is its water bottle depository of mostly premium insulated tumblers like Stanleys, Klean Kanteens, and white culture favorite Hydroflasks.

Not surprising really, but @meowchellao was taken aback and tweeted her unpopular opinion: why would you buy a Hydroflask for P2,000 to P3,000 if you can get a P500 insulated tumbler?

Debates of why you shouldn’t care what people do with their own money flooded the timelines, as well as reasons why these brands were different from the more affordable ones.

med students get the fuck off that high horse challenge ?

dami ebas about priorities eh bat ka nagtitwitter kung ganon? okay we get it mahirap med school or something pero you guys ain’t special, LITERALLY every degree is hard in its own way, just read your transes and go away https://t.co/GiL7upUuFK

When @RaeBae4291 tweeted screencaps of her conversation with a (seemingly way too) clingy date, she captioned it as “Dating in medschool in 3 screenshots”. This escalated into two things: med school students voicing out their reasonable take, that getting those “two letters” is their priority, and the non-med school users saying — I’m gonna single out the ever-present-in-Twitter-bardagulan @pukishan here — if that’s their priority, why are they even tweeting, and being in med-school isn’t a personality. It also deviated to some med students using med school as an excuse to be shitty a.k.a ghost people and/or cheat.

blocking ab b ey sy is self care ☺️☺️☺️ pic.twitter.com/3SOa4sbb7O

We’ve written about it before, but this still deserves a spot on the list. After all, it even reached Facebook — a sure sign that you’ve really broken into the mainstream, the exact same thing some folks on Twitter didn’t want Van Gogh’s art to be (let’s all ignore that he is arguably the most popular painter in the world, like they did).

When multimedia exhibit Van Gogh Alive Experience made its way to Manila, all these art gatekeepers suddenly popped up. For them, you’re not qualified to visit the exhibit if: a) you don’t know Van Gogh’s first name, b) you only know one painting of his, and c) if you’re just gonna take selfies inside. 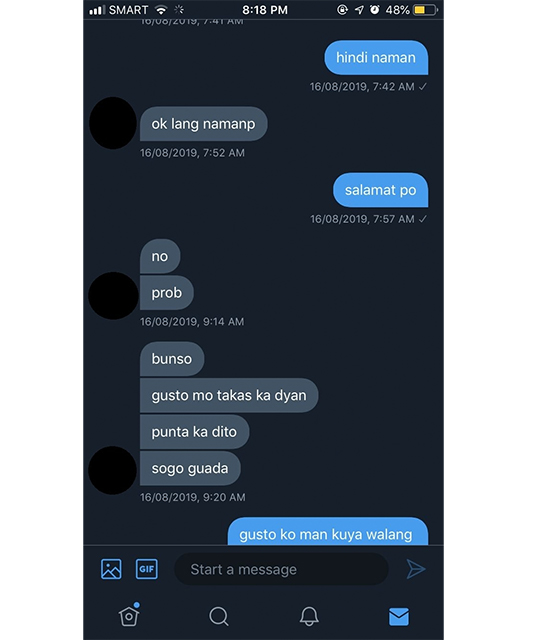 If there’s one thing that’ll forever be on Twitter, it’s the kalat. But if you’re looking for kalat that has everything, user @callme_ron had everyone on their phones.

A series of tweets that initially called out @jumongocampo for not returning the former’s Nintendo Switch games, he attached screencaps of their direct messages — and it has range. The conversation first played out innocently enough, two brothers arranging how the games will get picked up, then “kuya” asks “bunso” if he wants to meet up in SOGO Guadalupe instead.

You then realize the “kuya/bunso” tawagan is not familial at all, and for a moment, you wish you never made a Twitter account. And then, you become so invested and slightly confused. Long story short, dude got his Kirby game back. But as for us vanilla folk, the terms kuya and bunso will never be the same again.

I'm actually surprised how people have private twitter to air their kalat?? Is it how it's supposed to be done? Tangina dito ako mismo nagkakalat sa main sino bang di nakapagorient sakin na may ganun amp.

One of the pahabol entries of our yearend bardagulan is one of those okay lang topics that the Twitterverse just had to blow up.

User @yomattyu marveled about kalat posted in a private Twitter, and sociology professor @sosyolohija quote tweeted a socio concept that explains the need for such. For a community that’s been home to fan and alter accounts, the offshoots of private Twitter accounts, it’s surprising to see attacks for the quick sociology lesson.

The whole discourse about these secret accounts quickly turned into a barrage of people saying, why do you have to be so deep about it? Ang OA? If you needed a reason why you need a secret Twitter account, this should get you to make one stat.

Sarah Geronimo’s “Tala” shot to nationwide relevance after doing its rounds on social: from queen Bench Hipolito’s O-Bar performances of the song to an iconic takedown of barangay complainant Aling Nelia, set to the 2016 sleeper hit as seen in @embang23’s tweet.

In the video, a volleyball game was stopped because of a complaint, but what greeted the barangay officers (and Aling Nelia) was the whole ~resistance~ dancing and singing to “Tala.”

Everyone unanimously agreed that it’s the song of the resistance, the revolution, and it even resulted in a dance challenge (which had bored Twitter user commenting badly on some, but I digress). With a new decade ahead, one thing’s clear: “Tala,” and by extension, the power of the LGBT community, is here to stay.

The women behind your cup of coffee