Palace spokesman Harry Roque’s bid to have a seat at the International Law Commission is being opposed by no less than members of his alma mater— the University of the Philippines — among many others.

Following the UP Diliman Executive Committee's opposition of Harry Roque's nomination to the International Law Commission (ILC) on Tuesday, Sept. 14, the presidential spokesperson issued his statement on the matter, saying he "wishes to challenge" the committee's assessment.

UP Diliman's statement said Roque has a "very poor track record of promoting, defending, and fulfilling human rights and the rule of law, especially during the administration of President Rodrigo R. Duterte in which he serves as a cabinet member."

"His inclusion in the Commission would not serve its purpose but instead diminish the reputation of the body," it read.

Roque issued his response on Wednesday morning, where he said: "The flimsy justification made to object my nomination and election to the ILC makes it clear that there are some sectors who will do everything to besmirch my good name, reputation, and integrity simply because I do not subscribe to and share their same political beliefs."

The spokesperson, who earned his Bachelor of Laws from UP Diliman in 1990, continued to list his achievements for the past 30 years. He also taught international law at UP for over a decade.

"I wish to assure my former colleagues in UP that my commitment to human rights and rule of law has not wavered," he said.

VIRAL: Harry Roque blows top as he tells off doctors in a video meeting

Aside from UP Diliman, there are 288 organizations (as of writing) that have signed a petition, found on iDEFEND's website, calling on ILC to reject Roque. The site contains a letter addressed to the Secretary of the ILC, which says that Roque was "formerly a human rights lawyer" and that since he became a member of the Cabinet, he "defended many of the government's repressive policies." A list of signatory organizations can also be found on the site. 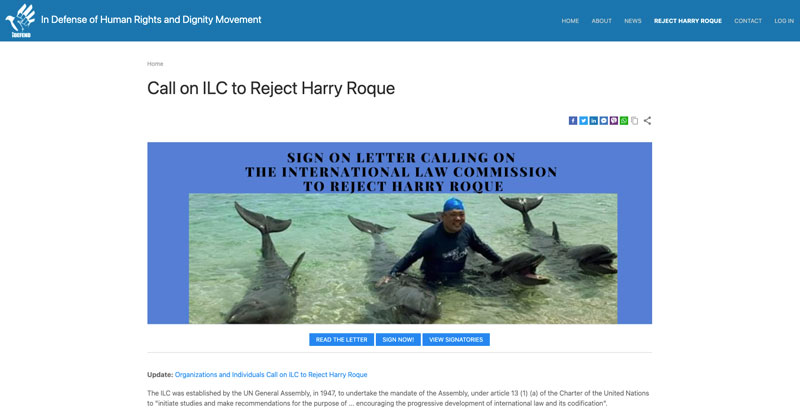 Roque is now in New York City for his ILC nomination, which is backed by President Rodrigo Duterte and Foreign Affairs Secretary Teodoro Locsin Jr. Every five years, the United Nations General Assembly elects 34 individuals to the ILC with eight seats for Asian countries. Roque is one of the 11 Asian candidates vying for a position.

'I apologize, but...': Roque gives qualified apology over outburst against doctors

Sydney gets 'blueprint for freedom' as virus cases fall