Forbes released yesterday, Sept. 8, its annual list of the Philippines' 50 richest. These tycoons have a combined wealth of P3.9 trillion. And despite the challenges posed by the COVID-19 pandemic, their collective fortunes saw a robust recovery, growing by 30%, and adding eight newcomers to the list.

On top of the country's richest list are the Sy siblings, heirs of the late Henry Sy Sr., with $16.6 billion. They remain at no. 1, adding $2.7 billion to their wealth.

Behind them is property tycoon Manuel "Manny" Villar, who saw a boost of $1.7 billion in the past year. Trailing in the third spot is Enrque Razon Jr. with $5.8 billion. Razon recently expanded his portfolio with his acquisition of Manila Water.

Making their debut on the list are Dennis Anthony and Maria Grace Uy, securing the top sixth spot with a net worth of $2.8 billion. The billionaire couple co-founded Converge ICT Solutions, which saw an 84% jump in revenue during the first quarter of the year due to a surge in demand for broadband services amid the pandemic.

This year's biggest percentage gainer, Monde Nissin cofounder and president Betty Ang, is up 20 spots at no. 18 after the company went public. This move also brought in other Monde Nissin executives to the ranks, including chairman Hartono Kweefanus and CEO Henry Soesanto. Keng Sun and Peter Mar, heirs to a biscuit business sold to Monde Nissin, also join the fold.

Other newcomers include Luis Yu Jr. And Mariano Martinez Jr. of 8990 Holdings, and Benedicto and Teresita Yujuico who earned their fortune from the listing of DDMP REIT.

From last year's third spot, Lucio Tan was knocked off the top 10. With Philippine Airlines filing for bankruptcy in the US, Tan fell to the 12th spot.

Aside from the liquor and airline billionaire, more than a dozen tycoons saw their names go down with nine dropping out of the list. 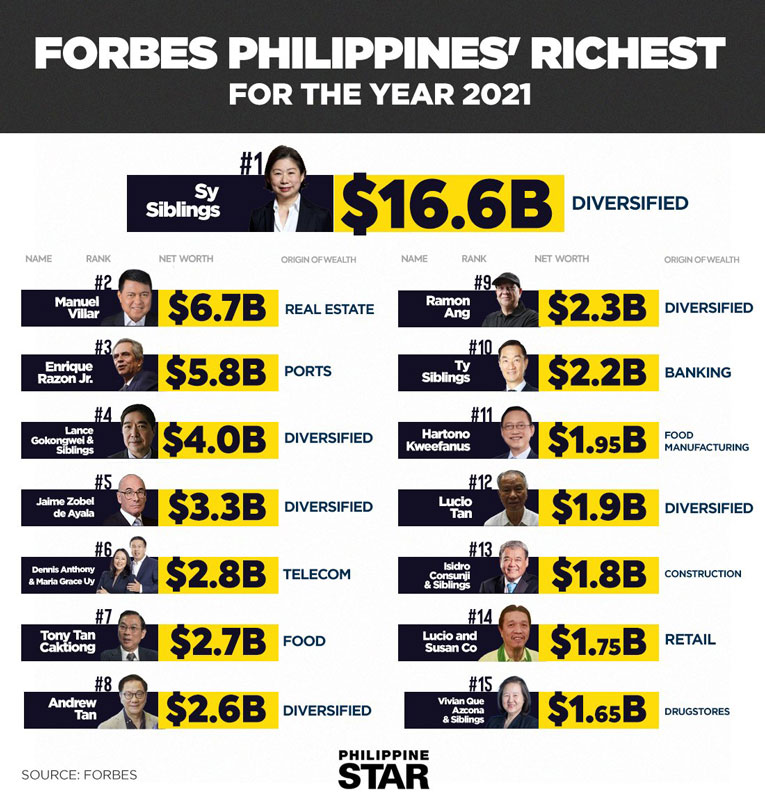 Indonesia to imprison people who have sex before or outside marriage

Some notes on travel writing