Style Living Self Celebrity Geeky News and Views
In the Paper Shop Hello! Create with us
The bust of the late National Artist for Literature F. Sionil Jose. Photo from his official Facebook account

Several tributes have poured in for National Artist for Literature F. Sionil Jose, who passed away at 97 on Thursday night, Jan. 6.

The National Commission for the Culture and the Arts (NCCA) also paid tribute to Jose.

"F. Sionil Jose’s writings since the late 60s, when taken collectively can best be described as epic. Its sheer volume puts him at the forefront of Philippine writing in English. But ultimately, it is the consistent espousal of the aspirations of the Filipino–for national sovereignty and social justice–that guarantees the value of his oeuvre," NCCA said in a statement.

The Cultural Center of the Philippines (CCP) also rememberedJose's works "espousing national sovereignty and social justice," saying he's "one of the most revered and read Filipino writers."

The CCP took note of the various accolades that Jose received throughout the years,including the CCP Centennial Honors for the Arts in 1998, the Outstanding Fulbrighters Award for Literature in 1988, the Ramon Magsaysay Award for Journalism, Literature, and Creative Communication Arts in 1980, as well as several Palanca Awards.

Acclaimed novelist Lualhati Bautista of Dekada '70, Bata, Bata… Pa’no Ka Ginawa? and Gapo recalled how she remained friends with Jose "through all the 40 years we have known him and Tess," his wife.

Bautista acknowledged that Jose "might go any time" due to his age. But for her, "If it's any consolation, at least he is said to have died in his sleep, quietly and painlessly."

Joan Didion, a US literary icon, dies at 87

In her blog post, Filipino American author and publisher Cecilia Manguerra Brainard posted some of her "joyful pictures" with Jose, as she's lost for words for "still processing" the "really really sad" news.

Felipe Jocano Jr., the son of renowned anthropologist F. Landa Jocano, said Jose was a "good friend" of his father, noting that they're journalists who worked for the same paper back in the 1950s.

"Goodbye po, sir Frankie. You'll be up there with Dad, talking about all sorts of things once more," Jocano Jr. wrote.

Miclat said Jose's "Brave Heart," in reference to his final Facebook post, may have stopped beating but the stories he wrote will live forever. She also thanked him for supporting her foundation and her family "all these years."

To the young writer: 'True writing is hard work and does not pay'

Veteran essayist-fictionist Cristina Pantoja Hidalgo, meanwhile, recalled how Jose was already in his heyday as writer and owner of Solidaridad Bookshop, home of the country's best Filipiniana titles, even when she was still an undergraduate.

Even so, Hidalgo said Jose had always been welcoming. 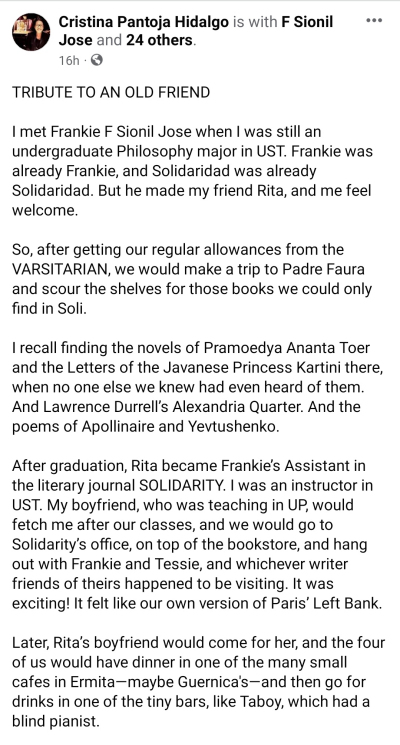 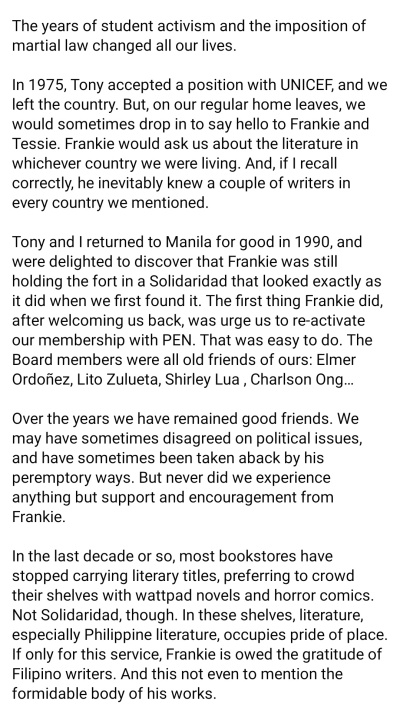 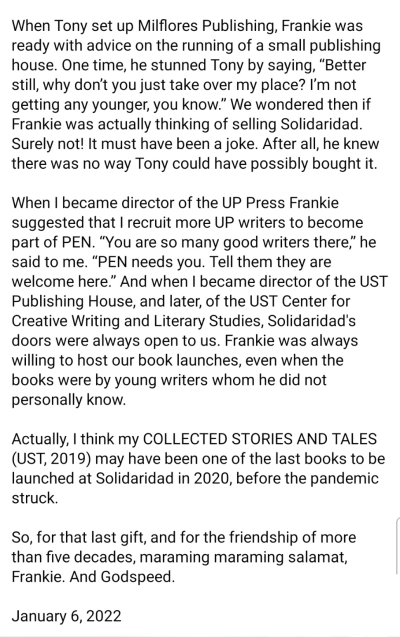 As they've taken their respective career paths, Hidalgo said she and Jose remained friends in the last five decades. Though she also acknowledged that they disagreed on political issues sometimes, so much so that she's taken aback by his "peremptory ways."

"But never did we experience anything but support and encouragement from Frankie," she said.

Others who remembered Jose also pointed out the more controversial aspects of the literary titan's life.

National Artist for Literature Virgilio Almario, through the online journal Filipino Ngayon where he is editor emeritus, remembered how Jose minced no words in stating his thoughts about other people in the discipline.

For instance, Almario said Jose was so enraged upon learning that Joma Sison, founder of the Communist Party of the Philippines, was conferred the Southeast Asian Writers Award in 2015. In another occasion, Almario noted how Jose also looked down upon National Artists for Dance Leonor Goquingco and Ramon Obusan, deeming their craft as not true art.

"Rio Alma" also pointed out Jose's racism and bigotry against the Filipino Chinese community. In 2015, Jose urged the government to shut down all Chinese schools "unless they are like the schools for the children of foreign nationals."

To the chorus of voices mourning the passing of Manong Frankie Sionil Jose, let me add my own

In a Jan. 19, 2019, column for the STAR, Jose suggested violence against the local ethnic Chinese, which he accused of being silent about the West Philippine Sea dispute, the way the "very good model" Vietnam did: expel them and confiscate their properties, even burn their factories.

Jose has been a Duterte supporter and in a June 14 column for STAR wrote that President Rodrigo Duterte "may yet be the best president we ever had next to (Ramon) Magsaysay," in spite of his administration's controversies, including the bloody war on drugs, lukewarm stance on China, and pandemic response.

When ABS-CBN shut down last May 5, 2020, in compliance with the National Telecommunications Commission order to cease television and radio operations following the lawmakers' denial of a new congressional franchise, Jose in a Facebook post on May 8 that same year said he'll "not mourn the passing of ABS-CBN," adding that the Filipinos "do not really need ABS-CBN. It does not produce food or goods."

Veteran journalist Joel Pablo Salud, a long-time friend of the Joses who has taken him to task on social media for his pro-Duterte stance, also posted a farewell note.

Salud said goodbye to a " friend," with whom he never had the chance to iron out their differences, "grave as they may be."

In another Facebook post, the former PhilSTAR L!fecolumnist recalled the moment that "Manong Frankie" bestowed him a gift, an ancient tree trunk sculpted by the river's current. The trunk fell and broke in two, and Jose gave him the other half, Salud noted.

"This is perhaps 500 years old,' the National Artist wrote in the letter. It included a blessing: 'May your prose be read in the future and survive as did this thing of beauty.'," his Facebook post read.

Edgar Samar of theJanus Silang young adult novel series fame, meanwhile, acknowledged that while he's disapproved of Jose's stance on matters in the past decade, he wrote in Filipino that he feels regret as he's an avid reader of Jose during his younger years.

A certain Mar Escalona, meanwhile, tweeted that Jose still left a mark in Philippine literature, even if he "might have turned questionable during his later years."

F. Sionil Jose might have turned questionable during his later years, however it cannot be denied that he still left a mark in Philippine literature. After all, he won’t be National Artist for nothing.

Sumalangit nawa, Nick Joaquin will be waiting for him there. https://t.co/xlzG23iFby

Escalona added that National Artist for Literature Nick Joaquin, Jose's contemporary and friend, "will be waiting for him there" in heaven.

Nick Garcia previously wrote for television. He is open to receiving story pitches at [email protected]