Two women are suing Apple over how their exes allegedly used AirTags to track their whereabouts.

The proposed class action lawsuit was filed in San Francisco on Dec. 5 on behalf of a woman in Texas and another in New York. According to the suit, the AirTags have "revolutionized the scope, breadth, and ease of location-based stalking."

Apple released the AirTags, a coin-sized Bluetooth device, in April 2021 for the purpose of tracking the location of personal objects like keys or wallets.

"With a price point of just $29 (P1,890 in the Philippines), it has become the weapon of choice of stalkers and abusers," the suit alleged. 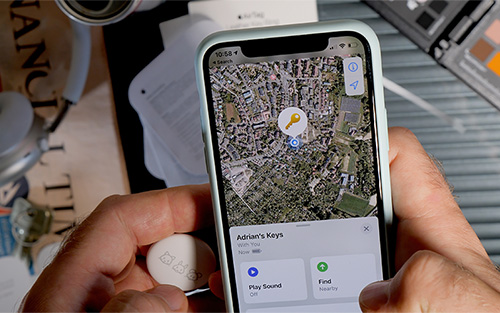 One of the women, identified as Lauren Hughes, claimed that her ex-boyfriend stuck an AirTag to one of her tire cars. The device was wrapped in plastic and colored with a Sharpie so it could not be found, but Hughes suddenly received a notification on her iPhone that an unknown AirTag had been tracing her movements.

After moving to a new house, the woman said social media posts by her ex showed that he had followed her there.

Meanwhile, a "Jane Doe" alleged that her ex-husband placed an AirTag in her child's backpack to follow her movements. She attempted to disable the gadget, but another one showed up in its place, according to the complaint.

"Ms. Doe continues to fear for her safety—at minimum, her stalker has evidenced a commitment to using AirTags to track, harass, and threaten her, and continues to use AirTags to find Plaintiff's location," the lawsuit said. "[She] seeks to bring this action anonymously due to the real risk that being identified would expose her to increased risk of harassment and/or physical crime."

Apple did not immediately respond to requests for comment on the lawsuit.

Man flies across the globe, spends £2,000 or P135k to retrieve his missing AirPods

In February, the tech giant updated the safety and privacy features of their tracking device after multiple reports of stalking.

"AirTag was designed to help people locate their personal belongings, not to track people or another person's property, and we condemn in the strongest possible terms any malicious use of our products," Apple said in February.

The company also made software updates that will notify and alert users if there's a nearby AirTag in their presence unless it is linked to their iPhone or Apple ID. Additionally, HowtoGeek says when an AirTag is away from its owner for longer than three days, it will emit a sound.