According to the post, “The city Government of GenSan—through Ordinance No. 53 Series of 2019 (otherwise known as the city’s Gender and Development Code)—declares the month of June every year as Men’s Month Celebration, and every 1st Monday of June as Men’s Day Celebration.”

The post says the declaration was made “in recognition of the importance of having men as partners in promoting gender equality and equity, and in the implementation of gender sensitive programs, projects and activities.”

The graphics of the post also bear the city seals of General Santos City and the population management office, and the hashtag #HEFORSHE. (He for She is a movement initiated by the United Nations for the advancement of gender equality.) 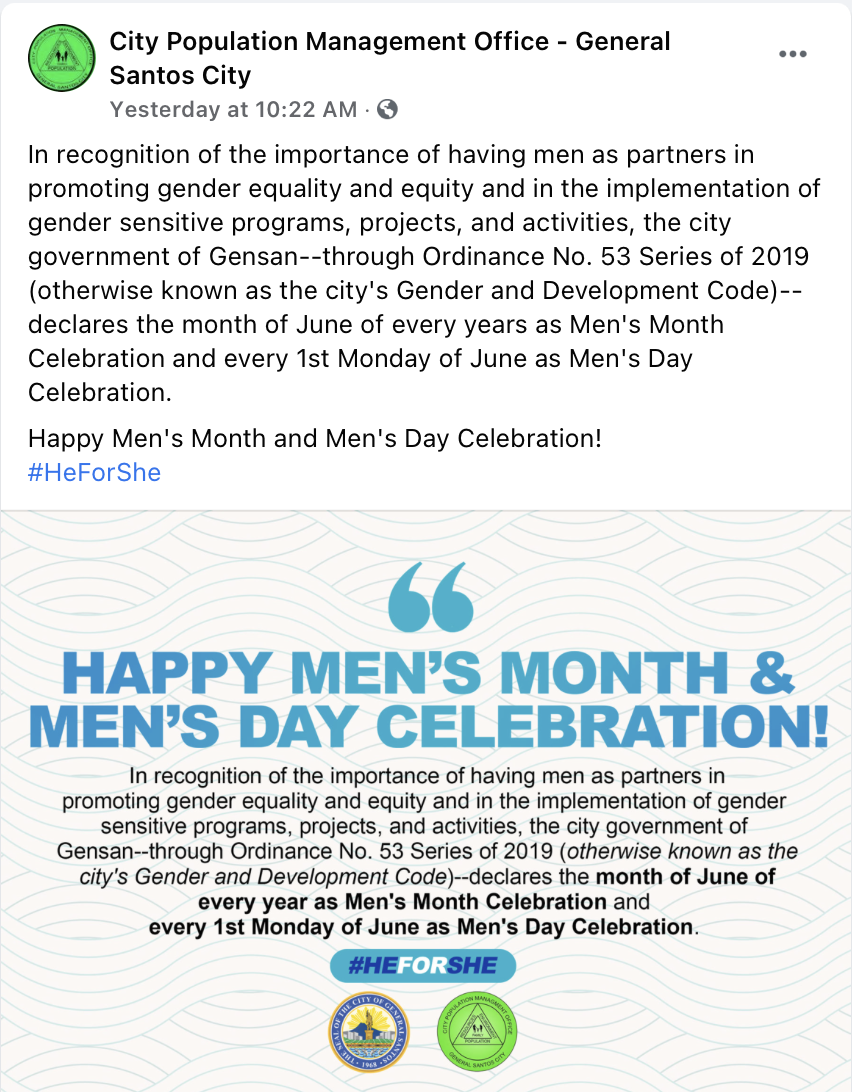 Other official Facebook pages of the city offices—including the LGU-Gensan, Sangguniang Panglungsod and Sangguniang Kabataan—do not carry the same post considering it is a “city celebration” as the population management office claims.

Many of those who trooped to the comments section of the post blasted the office for doing so at the same time the worldwide celebration of Pride Month is ongoing. Some even call for the post to be taken down.

“Wow! I mean, sure, good men deserve to be recognized, but isn’t it a little callous to do this on Pride Month?” One commenter said. “Years of repression of the LGBTQ+ community and now you want to take away this one month just to make yourself feel important, too. Wala na po bang ibang day sa calendar? #InsensitiveGenSan”

“It seems that some people’s masculinity is threatened, or maybe it’s the dry heat,” another one said. “Maybe it’s ignorance, maybe it’s internalized homophobia, whichever it is, this is dumb.”

The comments section was also peppered with LGBTQ+ related memes and GIFs.

Meanwhile, UP Mindanao Mentefuwaley, an LGBTQAI+ organization of the university, released a statement condemning the City Population Management Office’s post.

Among the organization’s call to action include taking down the CPMO-GenSan’s post, conducting a SOGIESC and gender sensitivity seminar for the office’s employees.

PhilSTAR Life reached out to the city of GenSan for a statement, it has yet to respond as of this writing.

According to its website, International Men’s Day “celebrates the achievement of men’s positive contributions to society, community, family, marriage, childcare and the environment.” It also highlights awareness towards men’s issues including discrimination in areas of social services, social attitudes and expectations, and law.

Heads up, aspiring authors: The National Book Development Board is offering publication grants

Is Nutribun the brainchild of Ferdinand Marcos Sr.?