Style Living Self Celebrity Geeky News and Views
In the Paper BrandedUp Hello! Create with us
EJ Obiena on Facebook

Coach Vitaly Petrov has denied in a statement sent to the media that he had an issue with his Olympic ward EJ Obiena over his compensation and alleged late payments for his services from the Philippine Athletics Track and Field Association (PATAFA).

“What happened is, I have been directly approached by Philip Ella Juico and heavily questioned, alongside my former athlete Sergey Bubka, in a manner which confused me and I felt pressured to answer in a way that they wanted me to answer,” Petrov said.

Petrov also mentioned answering and later signing “a questionnaire” where he was reportedly “made to understand through their circuitous questioning and reasoning that this would facilitate smoother payments. I was tricked.”

In a Zoom interview, Juico denied Petrov’s claims and provided PhilSTAR L!fe a copy of the document, which was signed by Petrov.

Juico said he has long been trying get in touch with Petrov even before the 2021 Tokyo Olympics because PATAFA has been paying for his services since 2018. But Juico said that Obiena “wasn’t too enthusiastic in having us meet.”

“Kasi he (Obiena) said may sarili daw rules yung sports psychologist, probably forgetting that the interest that should be protected is PATAFA, not the psychologist kaya sabi ko parang hindi maganda ito. Why are we being cut out of this thing? Pero I let it pass muna para walang gulo pagdating ng Olympics,” said Juico.

‘I will be back, and I will be back to win.’ EJ Obiena clears up reports he won't be joining the 2024 Paris Olympics

On Sept. 8, Juico said he got a call from Sergey Bubka, who is the vice president of the International Association of Athletics Federation. Juico said Bubka gave him a call after he texted him for help in trying to get a hold of Petrov.

“Sabi ko… ‘I’m sorry because I couldn’t go through Petrov. I could not contact him directly because our athlete said na he could not be approached’,” Juico said.

During that Sept. 8 conversation, Juico said Bubka told him that Petrov has money problems. “Doon unang lumabas yon,” said Juico, referring to the time when he first got wind of the issue about delayed payments to Petrov.

According to Juico, the conversation went as follows:

Juico: How can he have money problems if we’re paying him? Obiena gets the money and he pays Petrov

A WhatsApp audio call with Petrov was then arranged the following day.

“Noong andun na si Petrov sa WhatsApp audio conference, the conversation proceeded. Sabi ko, ‘you know I wanted to meet you because Obiena says you are not approachable’,” said Juico.

“No, I’m here Mr. President. What do you want to know?” Petrov said, as recalled by Juico.

Juico then asked Petrov if he has been receiving the money that PATAFA has been reportedly sending since 2018. But Petrov said that he did not receive anything except $4,000 in Oct-Nov. 2020.

“And Obiena told him that the money did not come from the government, the committee, or the federation but from his sponsors,” said Juico, recalling what Petrov said.

“Sabi ko what was your reaction that you had a salary that wasn’t been paid to you? Sabi ni Petrov, ‘I am shocked and I don’t know how EJ could do that to me. I treated him like a son’,” said Juico.

“After the Olympics, sinabi niya daw kay Obiena na for the past many years, he was [training him because] we were friends, and doing it out of friendship, because of Bubka, and the federation. Ang description ni Obiena sa federation unable to pay, we are a poor country… ganyan. So tinanggap niya yun, na walang bayad,” said Juico.

“So sabi ni Bubka, ‘you have to recover this and take action because this is very embarrassing to the PH and to our sports’,” said Juico.

Based on their WhatsApp conversation, Juico then suggested to have everything written down and notarized or apostilled. “Sabi ko what we’ll do is we will send you a series of questions which reflects our discussion,” said Juico.

Juico said that he received Bubka’s apostilled statement on Nov. 20 through WhatsApp and a hard copy through UPS a week later.

Juico also disputes Petrov’s claim that he was tricked into answering the questions.

In a Dec. 2 interview with ABS-CBN’s Dyan Castillejo, Obiena’s mentor James Lafferty said that “EJ made mistakes on this.”

“He made mistakes on being sloppy on finances. He knows it, admits it, and I bet he’ll never make it again. Let’s not destroy his life for being bad at personal finances which many of us are and nobody is going to the press and killing them over it,” said Lafferty.

We are publishing the document below in full as it was emailed by Juico's office. We have also reached out to Obiena and Petrov via email and Obiena's social media accounts but have not received a response as of press time. We remain open to their statements. 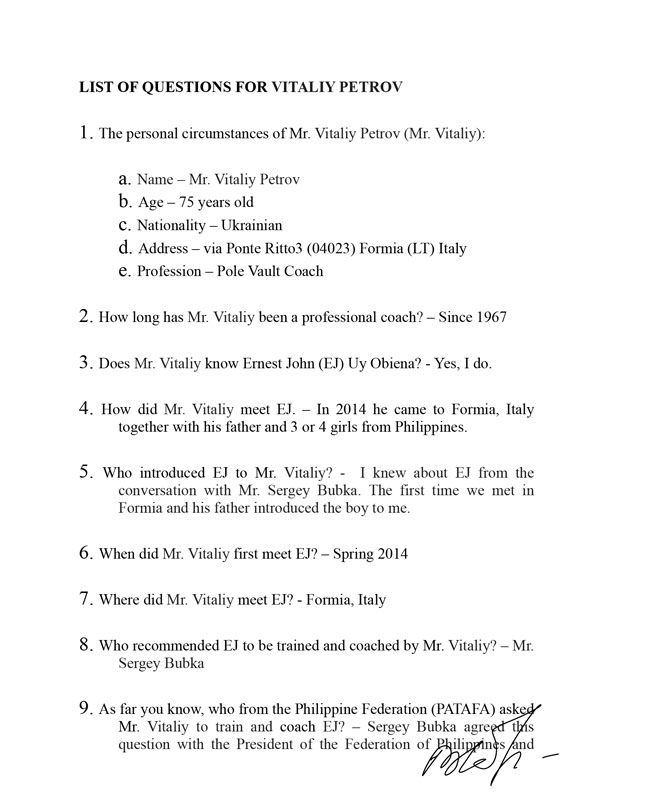 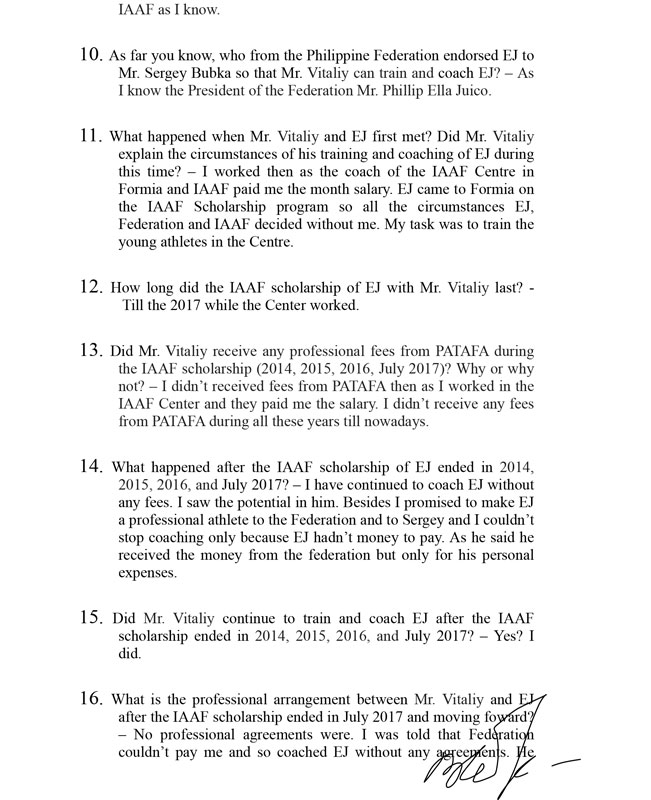 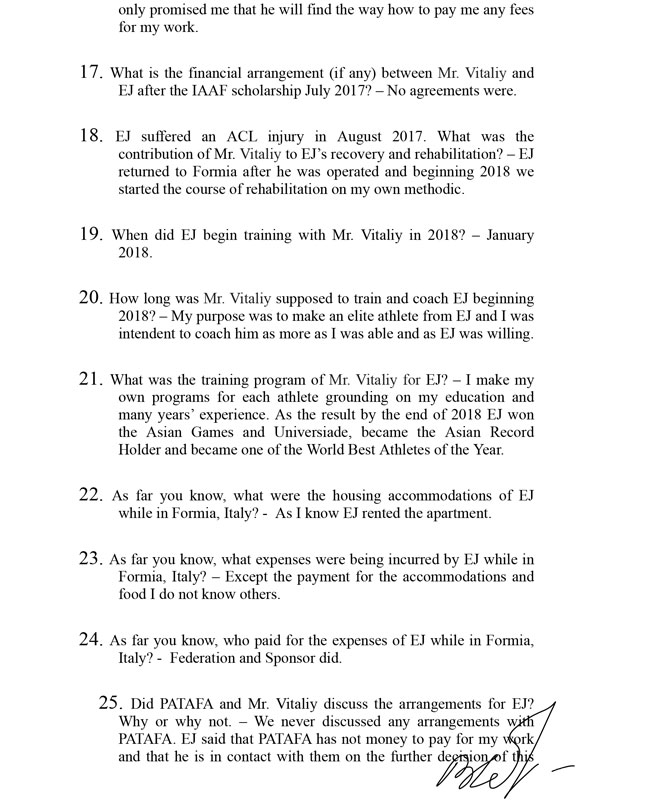 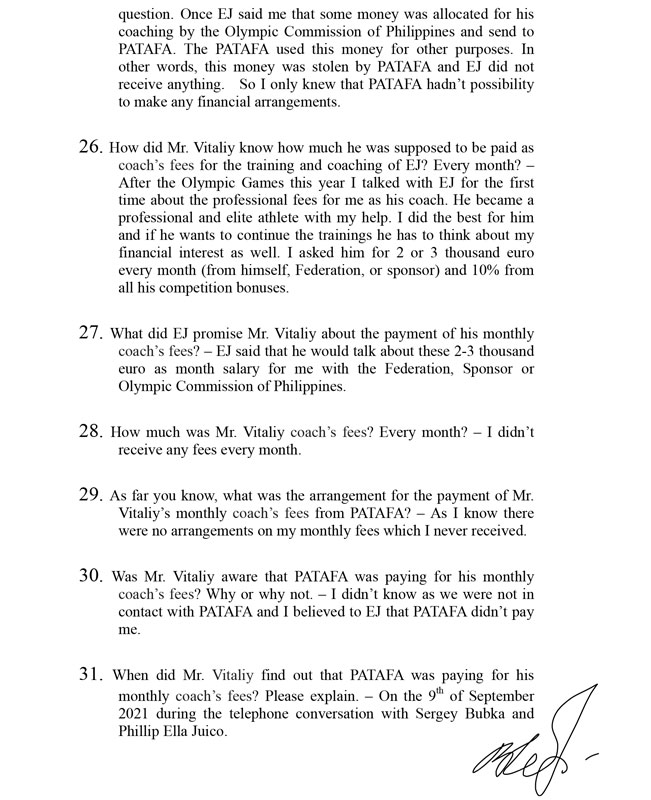 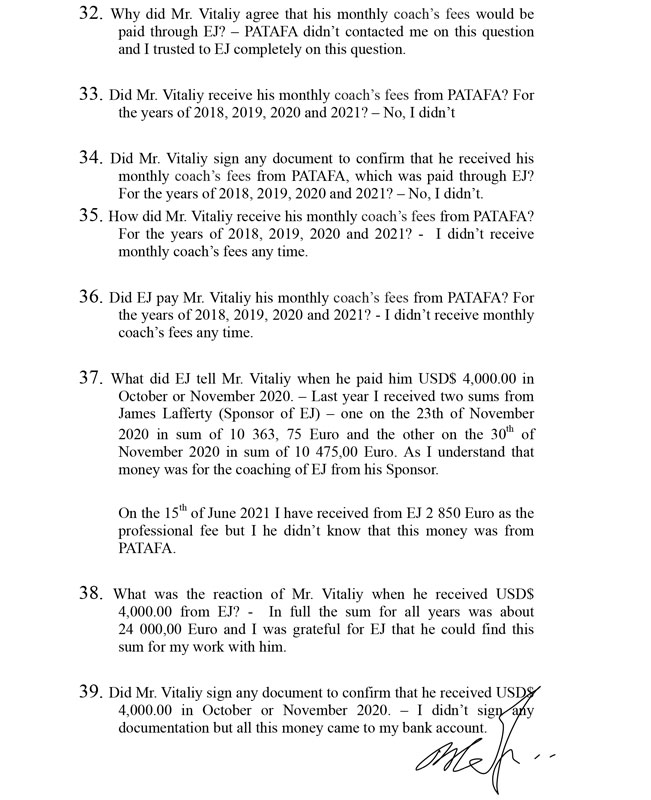 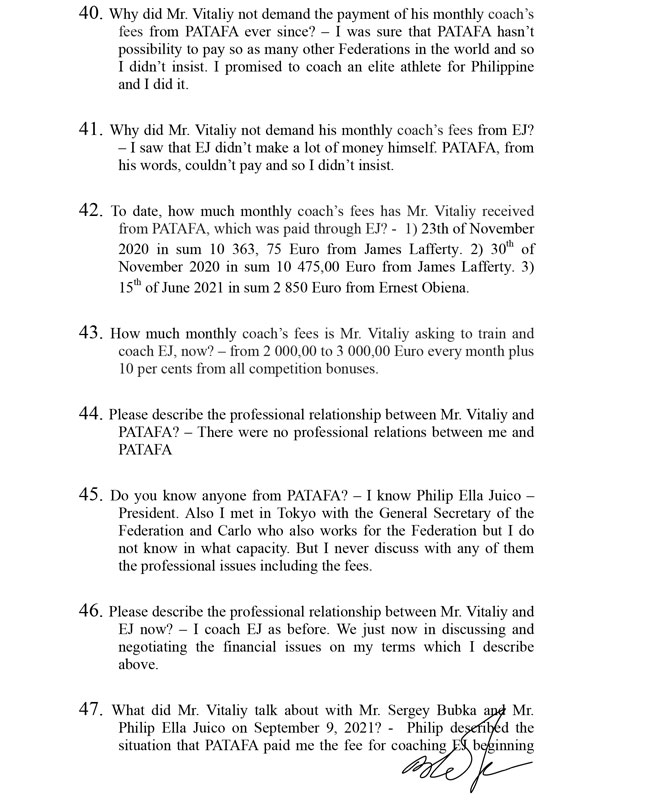 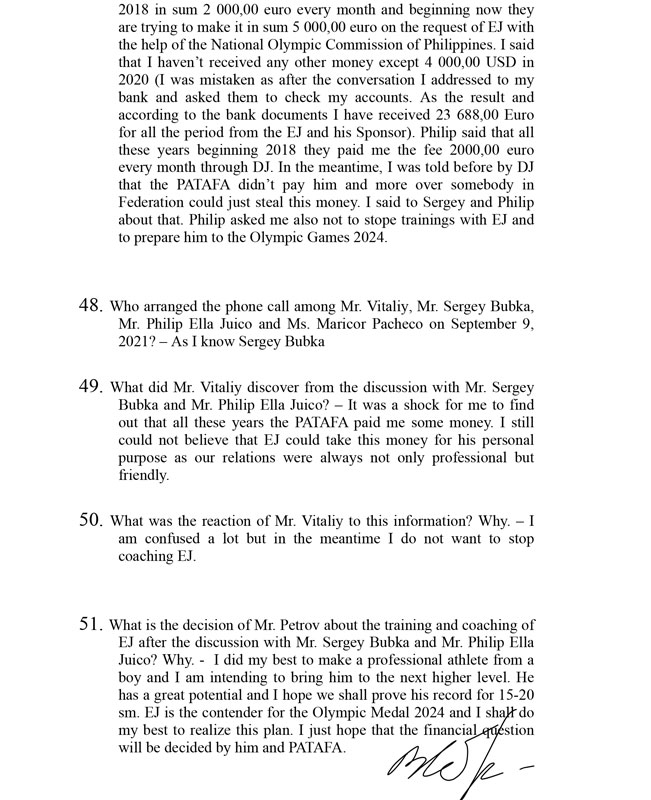 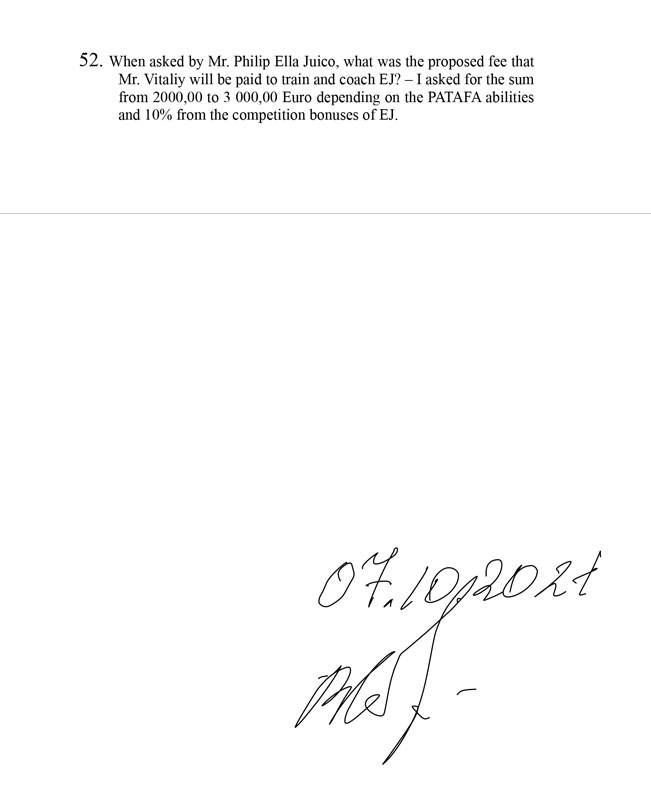 In a statement issued Nov. 24, the Philippine Sports Commission (PSC) requested Obiena and the PATAFA to stop “issuing statements to the public and on social media,” noting that “separate dialogues” between two parties have been “quietly” made. The PSC said it hopes that Obiena and the PATAFA will allow a “dialogue” to resolve the matter.

Elon Musk to reportedly charge businesses $1,000 (P50,000) if they want to stay verified on Twitter