Amid the rising cases of COVID-19 in the country in the past weeks, 400,000 additional doses of Sinova vaccines donated by the Chinese government arrived yesterday at the Ninoy Aquino International Airport.

According to Health Secretary Francisco Duque III, the new shipment will be “instrumental” in the country’s ongoing COVID-19 vaccination program, especially now when there is persistent increase in cases.

“We are grateful for the arrival of additional donated vaccines,” he said. “The arrival of these vaccines could not have occurred at a more opportune time considering the continued rise in cases, which in turn increases the need to inoculate more high-risk individuals as soon as possible.”

In a press briefing last Tuesday, National Task Force chief implementer and vaccine czar Carlito Galvez Jr. reported that 2,379,200 doses will arrive this month. This includes the 400,000 doses from Sinovac.

He said a total of 979,200 doses of AstraZeneca jabs are also coming in tranches starting today up to March 29.

The AstraZeneca vaccines are also donations through the Covax Facility of the World Health Organization which committed to provide vaccines for 20% of the Filipinos. 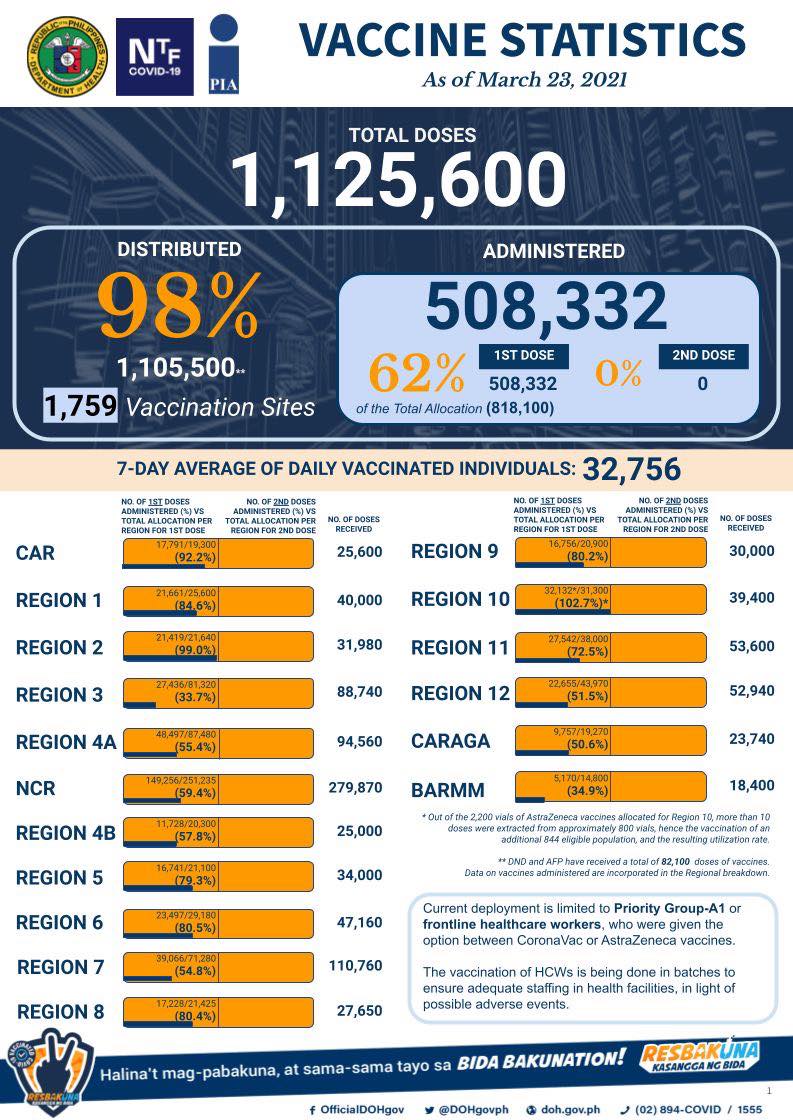 Prior to this, the Philippines had received a total of donated 1,125,6000 doses of Sinovac and AstraZeneca vaccines, kicking off the country’s inoculation campaign against COVID-19.

On March 29, the country will have its first delivery of “procured” Sinovac vaccines.

“These are all the vaccines that we will receive during the first quarter of the year…They will be distributed in 1,523 vaccination sites covering 771 cities and municipalities,” he added

There will be 4,500 vaccination centers to be set up nationwide.

By the second quarter of the year, Galvez claimed that a total of 11.5 million doses of vaccines will be shipped to the Philippines.

“In April, we will be getting a total of 5.5 million doses. This includes 1.5 to two million doses from Sinovac while three million from Gamaleya,” he added.

Russia’s Gamaleya National Center of Epidemiology and Microbiology, maker of Sputnik V vaccines, is the latest to get emergency use authorization from the Food and Drug Administration.

Another one million doses of donated vaccines are coming from the COVAX Facility in April.

Galvez said that 194,000 doses are coming from Moderna which has not filed an application for EUA or for the conduct of clinical trial with the FDA.

One million doses of Novavax vaccines will also arrive as part of the supply agreement signed by the Philippine government with Serum Institute of India for 30 million doses.

These supplies will bring to 11.5 million the total doses that the country will get for the second quarter of the year.

“We will be having a scaling up during the third quarter because it is when majority of our procurement will arrive,” Galvez added.

In August, the Philippines is expected to receive a total of 20 million doses and another 20 million in September.

Galvez said the delivery of vaccines will “be steady” as they expect to get more 140,000 doses of COVID-19 jabs, excluding donations from COVAX. “Our target vaccination this coming April and May is more than 500,000 to one million per week and then we will scale up,” he underscored. He added when the country gets a hang of the vaccination process, the target will increase to one to two million per week by June and July.

So far, Galvez claimed that 408,995 of the 1.7 million healthcare workers have already been inoculated against COVID-19.

Yesterday, Health Undersecretary Maria Rosario Vergeire had warned jumpers in the vaccination line, saying that the COVID-19 shots are for healthcare workers for the meantime.

“We are doing this (prioritization) framework because we want to vaccinate first the vulnerable and most at risk from being infected so that we won’t be overwhelmed by this illness,” she said.

Vergeire underscored that the country’s future supply of COVID-19 vaccines may be jeopardized if non-healthcare workers will be given the vaccines.

She added that the WHO had already cautioned that if there will be “glitches in adherence to the agreement” with WHO and the COVAX Facility over the donated vaccines, “our additional supplies of vaccines … might be compromised.”

‘NCR Plus,’ ‘granular lockdown’ and other things you need to know about this new GCQ

“Let us wait for our turn. It will come. We just need to have this prioritization because there is not enough vaccine right now,” she said.

The Department of Interior and Local Government had already issued a “show cause order” asking five mayors to explain why they got vaccinated although they are not in the priority list.

Vergeire has advised the public to be vigilant against jumpers by reporting them to DOH- HFSRB Complaint and Action Unit Hotline: 8651-7800 local 2527.

“If you see people jumping the line or skipping the vaccination line, you can call our hotline or regional offices so that we can investigate and put a stop to these practices,” she added.

Sheila is a reporter at the Philippine STAR and is currently covering elections and health. She is struggling to study Thai, Vietnamese, Korean and Japanese cuisines on her own.