The number of bicycle accidents last year in Metro Manila ballooned to its highest level in 11 years as the number of cyclists similarly grew, spurred by the need for alternative mobility options after the COVID-19 lockdown hamstrung public transport.

Based on monitoring data from the Metropolitan Manila Development Authority or MMDA, the total number of bicycle accidents last year shot up to 2,606, from 1,759 the previous year. This was also the first time that bicycle accidents went past 2,000 since the MMDA began tracking data in 2009, where it started at 1,111 that year. 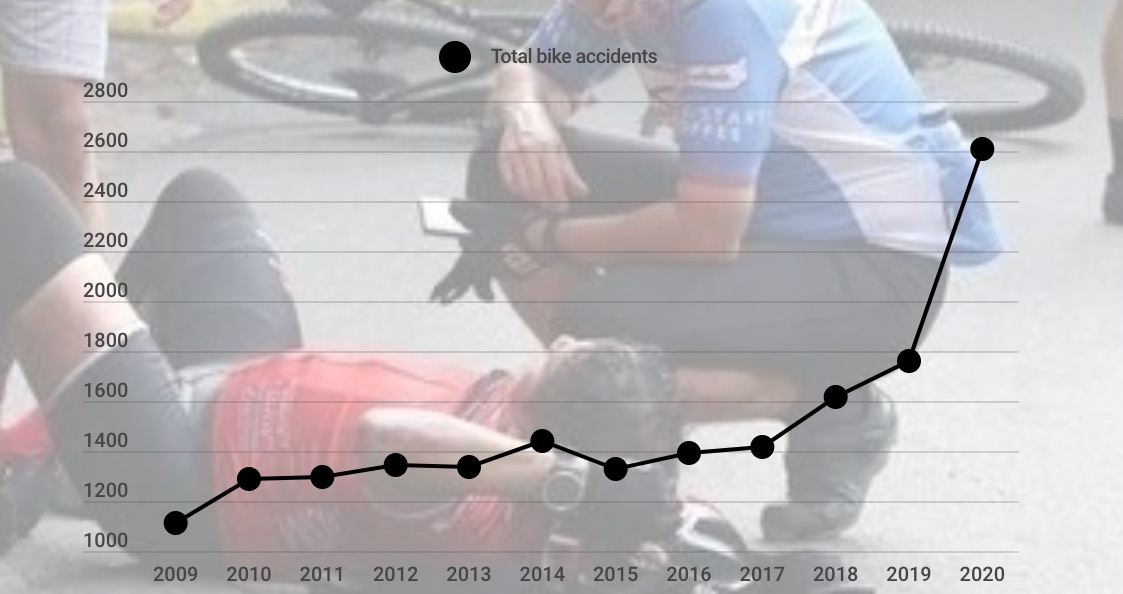 Michael Salalima, head of the MMDA public safety office, said their data are collected by MMDA personnel on duty who are mandated to assist during road mishaps. But though the data may be imperfect, Salalima said it is a good representation of the entire picture.

“It pretty much describes the situation on the ground, since mas marami na talagang bikes on the streets,” Salalima told PhilSTAR L!fe.

Anecdotal evidence also shows the growing number of cycling road accidents. Recently, there is usually never a month, or sometimes a week, where a post about a cycling accident pops up in one of the now-many local cycling groups on Facebook. At times, these posts come from local government units responding to the accident.

One spot, for example, in Timberland, which is a popular biking area in Rizal, has been having a string of scary crashes for quite some time that village officials have recently put up a safety net as a catchment tool to minimize the danger. The treacherous segment, popularly known as "siko," is a sharp switchback where many amateur cyclists usually fail to manage the steep and abrupt descent, dangerously overshooting toward the other lane.

This particular incident, involving a fixie bike, happened just today, Feb. 19. But there is almost not a week that goes by without an accident being recorded on the particular spot.

Some incidents do not involve treacherous terrain but a lack of basic road safety, such as this accident where a cyclist swerved left from the outer lane without checking over his shoulders, thereby hitting a motorcycle.

Legislating safety
Raymond Fortun, a moderator of the Facebook cycling group Pinoy Road Bikers Inc (PRBI), said there is much work to be done regarding road safety for cyclists.

"Even before the pandemic, there has been a lack of education both from the government as well as the private sector on the safety of cyclists. The reason for this is the absence of any law governing cycling and cycling safety standards," Fortun told PhilSTAR L!fe.

Fortun said that bills pushing for road safety for bicycles have been filed as early as 2011, such as Senate Bill 2688 titled “Bicycle Act of 2011” by Sen. Manny Villar, S.B. 2789 titled “Bicycle Friendly Communities” by the late Sen. Miriam Defensor-Santiago, S.B. 2924 titled “Bicycle Commuters Incentive” by Sen. BongBong Marcos, and S.B. 2936 entitled “Sustainable Transport Act” by Sen. Pia Cayetano.  But none has been passed into law.

"I am certain that motorists are familiar with scenes where cyclists would ignore a red light or counterflow without fear of being accosted by a traffic aide, simply because there is no law that regulates a cyclist’s use of public streets.  With the increase in bicycle use due to the need for social distancing during this pandemic, there is a serious safety issue that needs to be immediately addressed by the National Government," said Fortun.

To date, the Senate has approved on third and final reading Senate Bill No. 1582, which aims to create a safe road network for cyclists as well as pedestrians and other users of non-motorized vehicles for sustainable transport. The bill, known as the “Safe Pathways Act,” was filed by Sen. Pia Cayetano at the onset of the pandemic last year.

Prior to the pandemic, Fortun noted that they have also supported, through a signature campaign, an earlier bill filed by Cayetano, who is a cycling advocate herself, namely the National Bicycle Law of 2019. The proposed legislation aimed to mandate the development of policies, infrastructure, and facilities to properly integrate bicycles as part of the public transportation system.

"PRBI continues to be hopeful about the prompt passage of a law that would protect the biking public," said Fortun. "Once the enacting law and the rules of the road are in place, then there can be a consistent implementation of the rules, leading to a more accurate and credible educational campaign on biker safety via the available media."

Lack of infrastructure
Ann Angala, co-founder of the Bikers' United Movement (BUM), said that aside from basic awareness on the part of road users is the issue of basic infrastructure.

At the height of the pandemic, BUM figured in news reports after it took the issue of lack of basic road safety infrastructure into its own hands, putting volunteer marshals on Commonwealth Avenue that demarcated a bike lane on the outermost lane separated by colored water jugs and makeshift markers.

It was a guerilla strategy driven by the times that was hailed by many, though the MMDA saw it as traffic obstruction and even threatened to penalize the group, as stated by its spokesman Celine Pialago. The threat, however, died down after lawmakers, such as Sen. Francis Tolentino told MMDA to keep their hands off BUM.

"There are very few protected lanes and we need not just more, but a network of lanes that will allow cyclists to safely navigate from one municipality/city to the next," Angala said in a separate interview. "We need lanes that are separated by bollards, barriers or elevated, painted bike lanes are just tokens for compliance.  If safety were top of mind of the agencies and LGUs, then an interim solution should be painted lanes with enforcement that will lead up to a creation of permanent and safe lanes."

"Education of cyclists and road users on the barangay level should follow closely behind.  We need to address the transport culture of the country. We need to change the mindset, from car-centric to inclusive and sustainable transport-centric," said Angala.

The government, noted Angala, should take the lead in putting the necessary infrastructure to ensure road safety for cyclists. But whenever there is a vacuum, the government should also be open to letting transport advocates and civil society enter the picture.

“BUM was able to do this when Metro Manila opened up to GCQ last June 1 2020. We were a small group of advocates and went against odds with the end goal of keeping cyclists safe on the road and to drive a point that doing this advocacy need not be complicated, expensive nor bureaucratic,” Angala said.

Safety culture
On the part of the cycling community, there have also been a number of efforts to educate users.

The advocacy group Cycling Matters, for example, put out a downloadable safety handbook guide for cyclists in English and Filipino.

"Cycling is something that should be seen by everyone as a safe activity," said Jan Belmonte of Cycling Matters.

"Maraming nagsasabi na it’s really the safety culture that should come first. But one of the things sa infrastructure is yung 'build it and they will come.' In the same way that we have built roads to drive cars, that same principle is now needed to make cycling more feasible and more attractive for people who would otherwise think that cycling is just for the athletic," Belmonte said.

Protected bike lanes
After the hoopla last year over bicycles as one of the new main modes of transport under the new normal and grand plans in Metro Manila to put up adequate bike lanes that are not just painted but properly protected with barriers, nothing concrete has been forthcoming as of yet.

In November last year, Transportation Sec. Arthur Tugade said they will source P1.3 billion under the P9.5 billion funding of the Bayanihan to Recover as One Act to build bike lanes in Metro Manila, Cebu, and Davao. MMDA chair Benhur Abalos, who took office last January, has been quoted in reports as saying that the plan is still under study.

"The government is already paying attention to what people has been asking for a number of years, and the best part is that people are actually getting on their bicycles."

Salalima said that apart from coordinating with some LGUs on the provision of their bike lanes, meetings are still ongoing with the Department of Public Works and Highways and the Department of Transportation for the construction of bikes along EDSA.

Meanwhile, at the House, ACT Teachers Rep. France Castro already filed House Resolution 1586 on Feb. 18 to probe the delay in the construction of bike lanes as mandated under the Bayanihan to Recover as One Act.

“NEDA supports the creation of safe pathways for cyclists and pedestrians to make our streets safer and more accessible. This will make transportation in the country more inclusive and sustainable,” said Acting Socioeconomic Planning Secretary Karl Kendrick T. Chua.

This comes after Chua has recently started biking to work. NEDA also put out eight bicycles for its employment to use under a bike sharing program.

With more people talking about cycling, Belmonte said that he's "generally optimistic about the future for cycling in our country."

"The government is already paying attention to what people has been asking for a number of years, and the best part is that people are actually getting on their bicycles. People say that the future of transport is high tech flying cars but when you think about it, the bicycle could just be the best way to do it.”

Woman arrested for swindling an 87-year-old Holocaust survivor out of his $2.8 million life savings