The Inter-Agency Task Force for the Management of Emerging Infectious Diseases (IATF) has “provisionally approved” the guidelines for the pilot implementation of the alert level system in Metro Manila, Malacañang announced Friday, Sept. 10.

Presidential Spokesperson Harry Roque announced in a press briefing that for its pilot in Metro Manila, the new alert system will only have two quarantine classifications: enhanced community quarantine (ECQ), to be imposed by the IATF; and general community quarantine (GCQ), which will be dependent on a particular city’s alert level.

The alert system will have four levels, with 4 being the highest. When an area is under Alert Level 4, dine-in, personal services and mass gatherings are prohibited. However, Roque said the IATF is still ironing out the details of what activities will be allowed under the strictest alert level.

He added the classification of pilot areas and their alert levels will be done weekly unless specified otherwise.

Palace postpones shift to GCQ, Metro Manila to remain under MECQ until Sept. 15

Meanwhile, the areas under the system will implement granular lockdowns based on the National Task Force Against COVID-19 guidelines, said the spokesperson, who added that these lockdowns will be stricter.

DILG Undersecretary Epimaco Densing III said in the same press briefing that in specific areas with case clusters, a more stringent granular lockdown will be implemented. Under this, only three APORs will be allowed to go out in “highly extraordinary circumstance,” which include healthcare workers with no accommodation and medical emergencies.

Densing said the new policy on the granular lockdown in NCR may be implemented from Sept. 16 to 30.

For other areas, only targeted restrictions will be implemented that are consistent with “Three Cs” activities identified by the task force: closed (or indoor), crowded, and promotes close contact.

In Densing’s presentation, sample activities for each alert level are as follows:

For Alert Levels 2 and 3, a 10-percent increase in capacity may be allowed if the establishments implement a Safety Seal Certification and if the activity or gathering will be held outdoors. 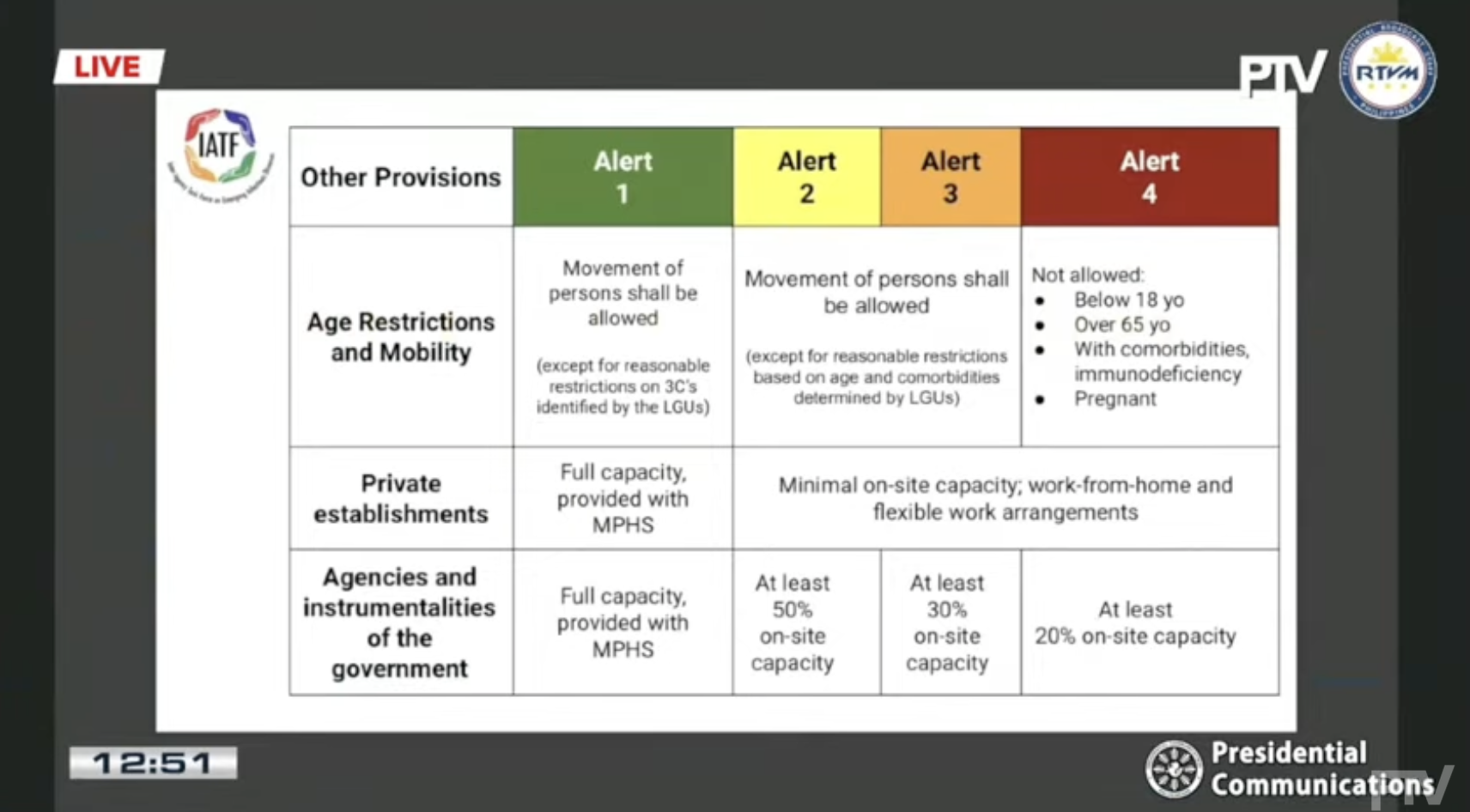 Movement will also be dependent on the alert levels under the new system.

Roque’s outburst vs doctors draws calls for his resignation, outrage from gov’t officials and netizens

Roque added that LGUs and the Department of Social Welfare and Development will provide assistance to residents affected by the granular lockdown.

Malacañang initially announced on Sept. 6 that Metro Manila would shift to a more relaxed general community quarantine together with a granular lockdown system on Sept. 8, Wednesday, only to postpone it a day after the announcement.

Metro Manila is currently under MECQ status until Sept. 15, or until the alert level system is ready for implementation.