In his statement on Wednesday, Jan. 13, Galvez clarified that the lists making rounds online are far from the government’s negotiated prices under the COVAX facility and are almost "300% cheaper" than market prices.

"We want to caution the public on the prices of vaccines circulating online and in many publications. These are market prices and not the COVAX prices that were in our negotiations with vaccine manufacturers," he stressed.

"Despite the limited supply and massive global demand for the vaccines, we were able to negotiate and secure over 100 million vaccine doses at a lower price or the same price offered to the COVAX facility," he added.

Galvez said that the price list will be kept confidential in adherence to the non-disclosure agreement signed by the government.

Still, the vaccine czar guaranteed that the government will only procure booster shots with “promising results.”

He continued, ”The government maintains a portfolio of vaccines. This contains all the brand names and manufacturers of vaccines that are under development, from this portfolio, the government identifies the companies it will negotiate with.”

"All our decisions are based on the recommendations of our vaccine experts who have seen promising results in the candidate vaccines," he added.

Sinovac cheaper than other brands?

While Galvez is keeping mum on the jabs’ actual cost, the Presidential Adviser confirmed the vaccines acquired by the government from China’s Sinovac Biotech are cheaper than those manufactured by US pharmaceutical firms.

Several senators and organizations are questioning Malacanang’s apparent favor for Sinovac’s vaccines even though it is reportedly pricier and only has an efficacy rate of 50 percent.

According to the price list released by Senate Committee on Finance chair Sonny Angara in December last year, Sinovac costs P3,629.50 for two doses per patient. It is the second most expensive vaccine, next to Moderna’s P3,904 to P4,504 booster.

However, Galvez stressed that the senator’s data is incorrect

Despite the limited supply and massive global demand for the vaccines, we were able to negotiate and secure over 100 million vaccine doses at a lower price or the same price offered to the COVAX facility.

Aside from Angara, Senate Labor Committee chair Joel Villanueva likewise issued a tally of the vaccine prices, yet with lower figures, in early January.

Both memos were immediately published by some news portals and Facebook pages. 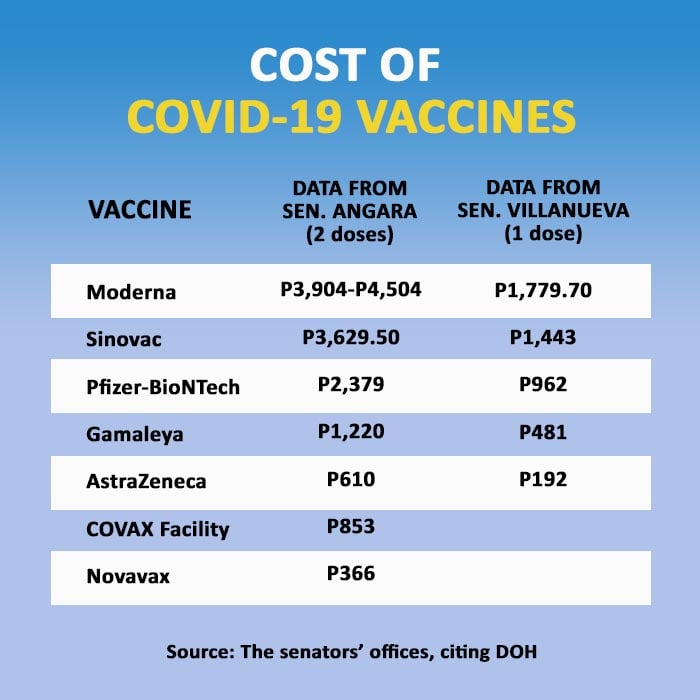 Shortly after Galvez asserted that Angara’s information is inaccurate, Angara and Villanueva took to Twitter to clarify that the data was sourced from the Department of Health (DOH).

Angara tweeted on Jan. 14, “For the record, those were given by the DOH two months ago during budget hearings in response to senators’ questions. Prices may (or may not) have changed since then. Don’t shoot the messenger.”

“Same here. We got these figures from DOH. FYI please,” Villanueva seconded.

Same here ?‍♂️ we got these figures from DOH. Fyi pls https://t.co/24T7aaUq0q

PH has adequate funds for vaccines

Amid the mix-up about the cost of vaccines, the Department of Finance (DOF), meanwhile, assured the public that it has been provisioning funds for the purchase of doses that would cover at least 55 percent of the country’s population.

In the inaugural meeting of the Management Association of the Philippines on Jan. 12, Finance Secretary Carlos Dominguez III said the agency has “in place” P75 billion of the P82.5 billion budget required for the nationwide vaccination program.

P2.5 billion will be pulled from the budget of DOH, while P10 billion will come from the funds allocated for the Bayanihan To Recover As One Act. The remaining P70 billion will be loaned from multilateral lenders, the Philippines’ bilateral partners, and the domestic market.

Dominguez noted that based on initial computations, each person will be vaccinated for P1,300—required doses, syringe, and other support services included.

At P1,300 per person, the government would be able to inoculate roughly 57 to 60 million Filipinos out of the 70 million that need to be vaccinated, Dominguez said.

“Now, that leaves you 13 million people. We expect the 13 million to be covered by the LGUs (local government units), the private sector, and of course,  there are the recusants—the guys who don't believe in vaccination,” he explained.

“So, basically, we are going to be covered and I think we will be able easily now, with the resources that we have raised, to vaccinate 60 million Filipinos.”

Elon Musk to reportedly charge businesses $1,000 (P50,000) if they want to stay verified on Twitter