We took a risk when we responded to messages from strangers.

While there were ideas within CYLI about starting something similar on our own, we have yet to commit ourselves given our different ongoing projects that we were focused on.

“My family is lucky to have been on the comfortable end of this pandemic,” art director Patricia Denise Dizon said in her message to our Facebook page. “I was thinking of emulating the Maginhawa community pantry, but I think it would be more meaningful and impactful if done as a team.”

Almost at the same time, teacher Ronald Fortaliza also sent us a message informing us that he and his friends are planning to set up a pantry in Caloocan.

Ron and Patty had never met before. They are not members of our organization. We were complete strangers.

But this is the very vision of CYLI when we started the organization. We wanted to establish a platform where young people with different advocacies and initiatives for communities can collaborate and work together.

That same day, we set up a virtual meeting to discuss the details about the project.

The primary task was identifying the location where it will be established. We decided to set it up in Poblacion, one of the busiest areas in South Caloocan. It was also where the seat of the Bishop of Caloocan is located, so we felt that it was only proper to reach out to the San Roque Cathedral Parish.

While we were meeting, I reached out to Caloocan Bishop Pablo Virgilio “Ambo” David and asked if there is a chance for the team to discuss the plan with them. He immediately agreed.

The following day, despite their busy schedule as they were preparing for the opening of the Jubilee Door in celebration of the 500 years of Christianity in the Philippines, a partnership was formalized.

The beauty of the community pantry initiative is that it allows people from different walks of life to band together to achieve a common goal.

The beauty of the community pantry initiative is that it allows people from different walks of life to band together to achieve a common goal.

We took our chances and met with strangers, and we were rewarded with something that is far from what we initially expected. Suddenly, we have an entire parish, along with a number of volunteers, who are willing to make this come to fruition.

Bishop Ambo ended his homily by talking about the community pantries, which he described as “one of the clearest and the most tangible sign of hope in the midst of hopelessness brought about by this COVID-19 pandemic.”

Describing it as the good kind of virus, the Bishop urged for the establishment of more pantries in the Diocese and across the country: “Please, I beg of you, let us not allow it to fizzle out. This is perhaps the best chain reaction I have ever heard of in the time of crisis.”

Within hours, donations poured in, giving the pantry more than enough, that we then discussed a donation sharing scheme with other similar initiatives in the city. 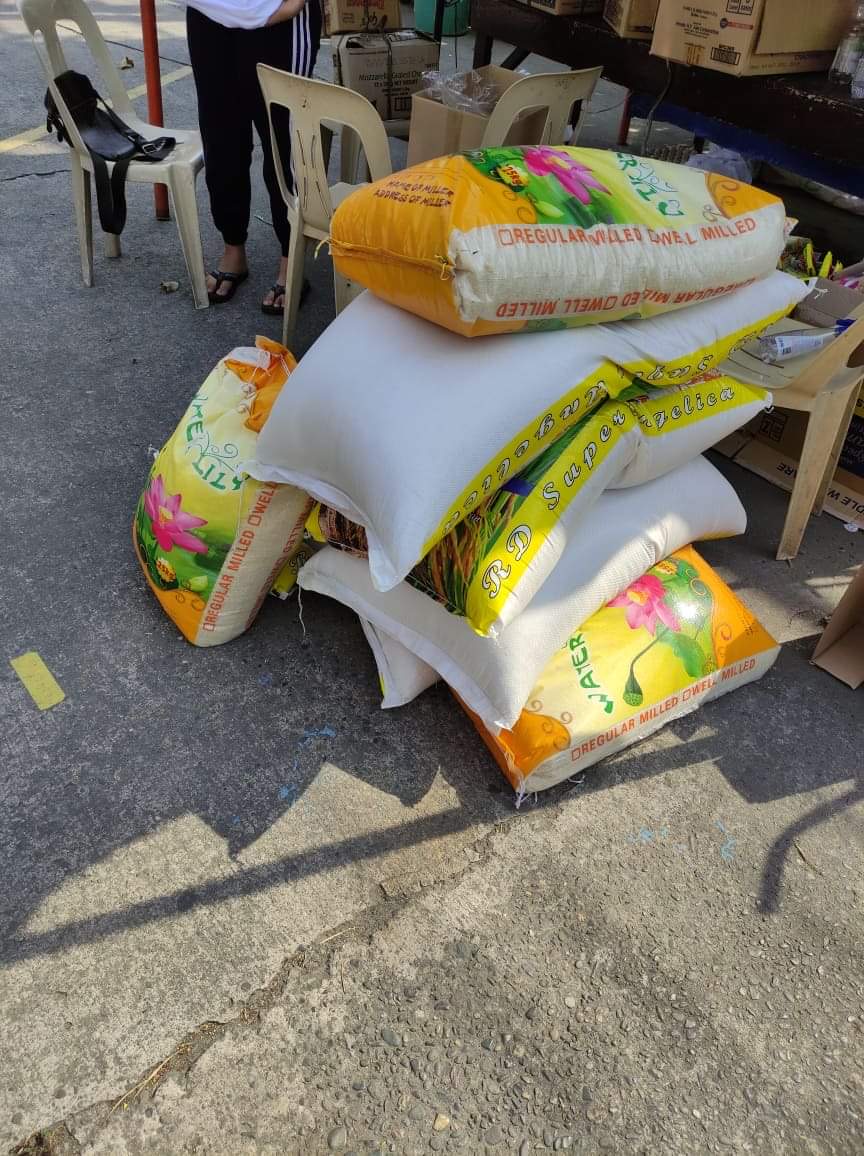 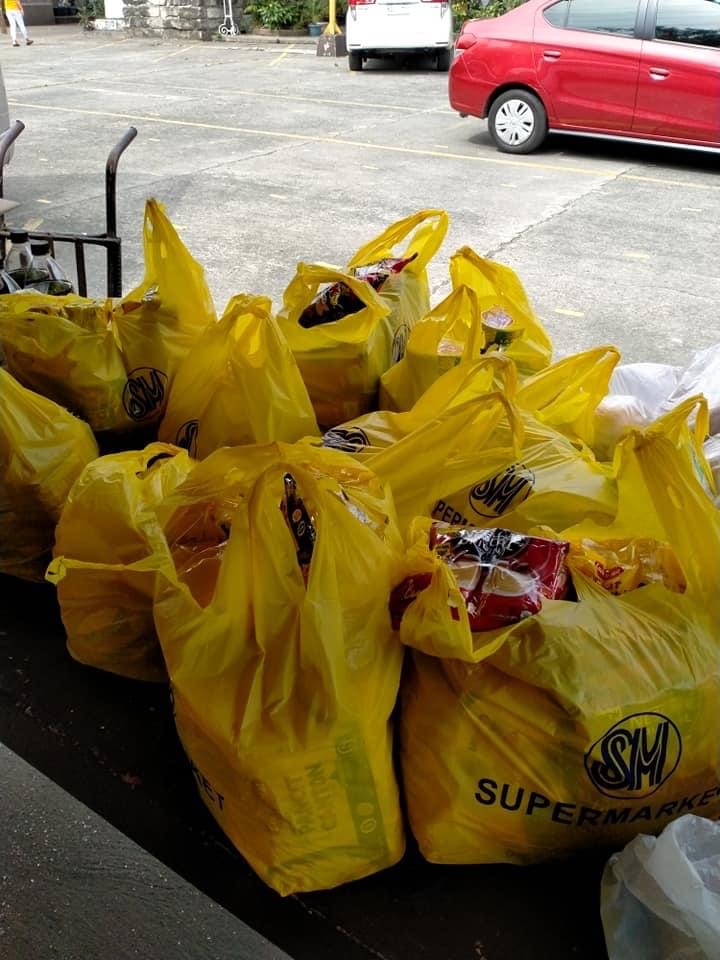 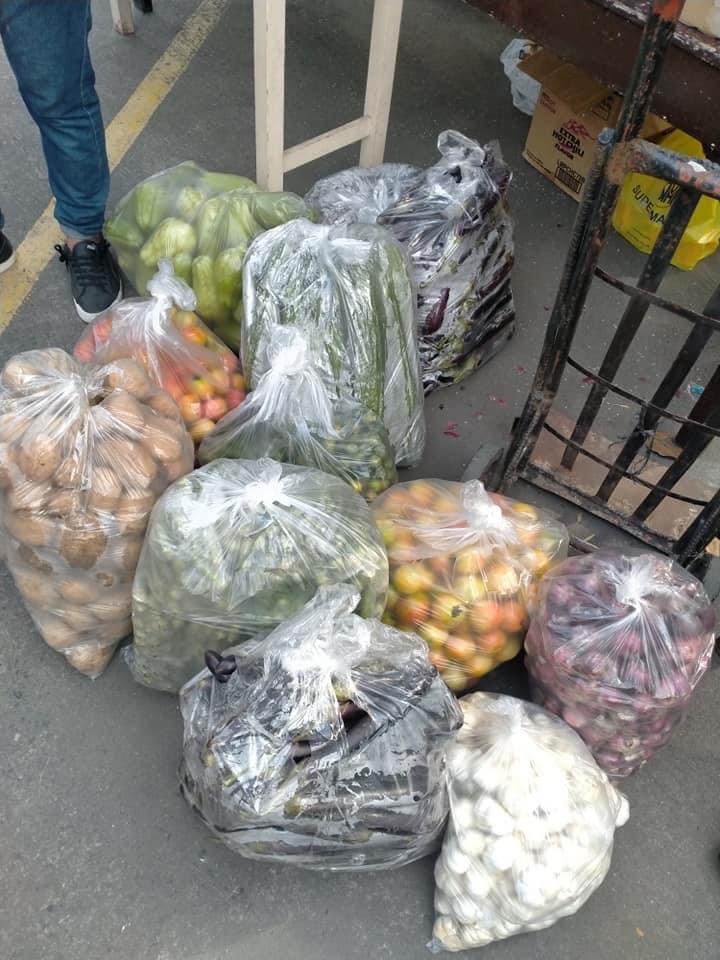 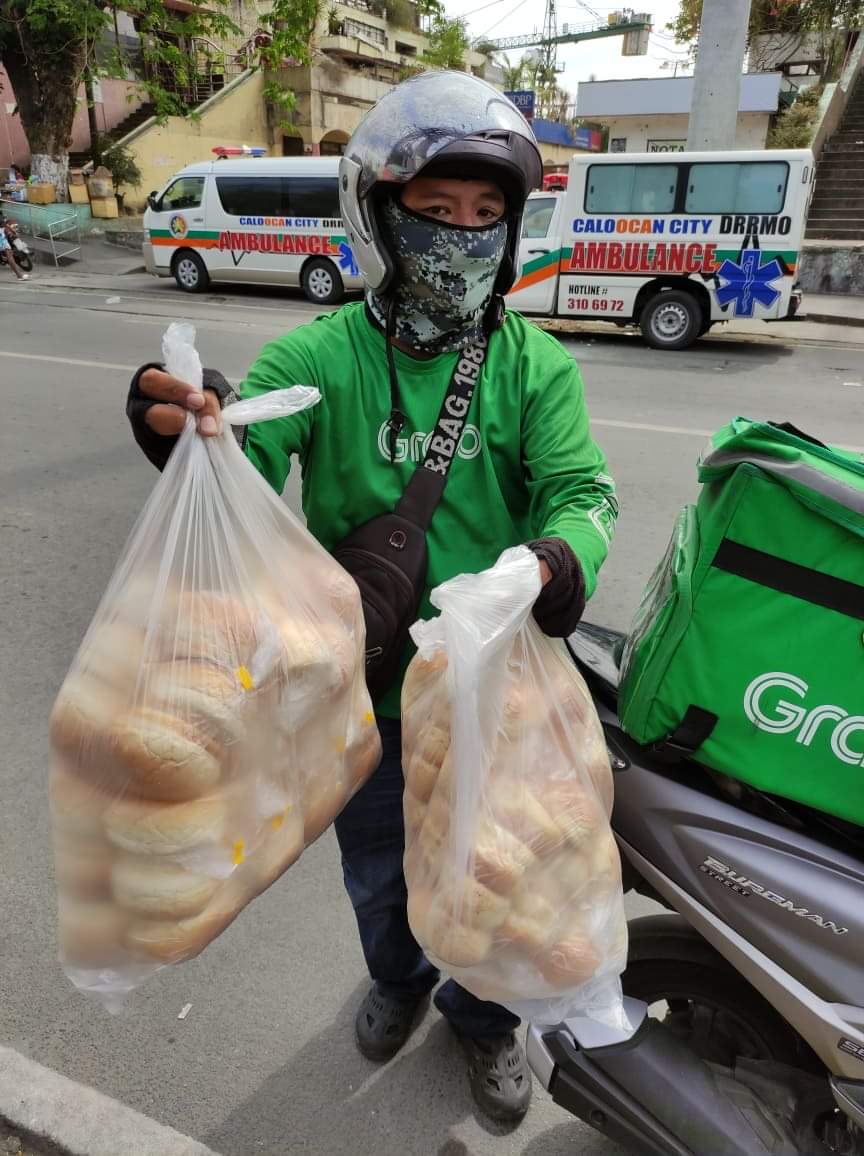 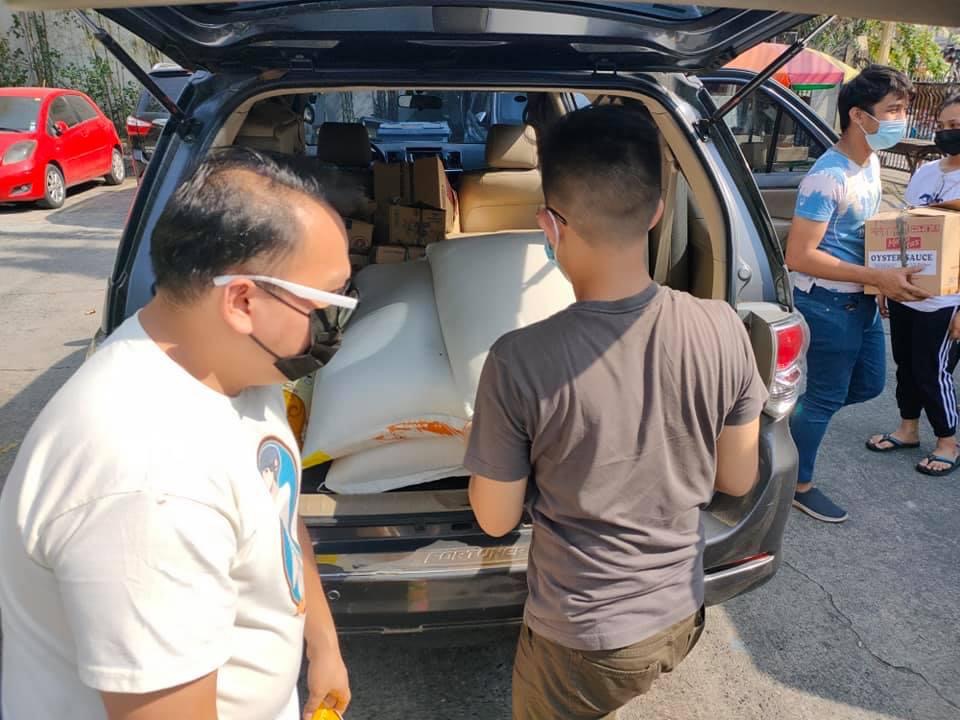 Establishing a pantry is a learning experience for everyone involved.

From the very beginning, the idea was simple: set up a space for people to give what they can or take what they need.

But there were also gaps that eventually emerged.

In Maginhawa, for instance, a deluge of donations poured in, along with an increasing number of people lining up every day with hopes of getting something from the pantry.

While writing this, I received updates from the group managing the San Roque Community Pantry. We started seeing more strangers stepping up, including some of those who lined up who decided to stay and assist in maintaining order during replenishment.

It was a very different scenario from the previous days, when every task – from accepting donations and replenishing the pantries to answering queries and maintaining social distancing – was left to a handful of people who started the pantry.

It was a breath of fresh air and a reminder that, regardless of where we stand, humanity still prevails.

There have been discussions about several issues encountered by those who established the pantries, foremost among them the matter of sustainability and instances when people take what some would think was more than what they need.

In San Roque Cathedral, we also saw people lining up over again and again to get something from the pantry.

During such instances, we remind ourselves of what Ana Patricia Non, the founder of the Maginhawa community pantry, said: "Let us withhold judgment and try to understand where they are coming from. Share with them the idea and the vision of what the community pantry is, and why we have to do."

The genesis of a movement: How and why did the Maginhawa Community Pantry start?

Educate, but also, learn from them.

I did not expect that the most striking learning experience for me would come with an encounter with a child we saw lining up multiple times in the pantry last Sunday.

Telling him that he should be home as he was not allowed outside due to quarantine restrictions, with a smirk, he responded: "Wala naman kaming bahay."

It was a slap in the face. I should have known better. And I admit that sometimes, we forget.

A Facebook group has been set up to discuss challenges faced by those who established the pantries. Suggestions were given, mutual support was provided.

I recently saw how the initiative continues to transform and evolve: there are now mobile pantries to bring the goods directly to the people, there is a pantry catering to the needs of our furry friends.

We learn as we move forward.

Regardless of our beliefs – political, spiritual or even ideological – those behind the pantries remain united with its rallying cry: “Magbigay ayon sa kakayahan, kumuha batay sa pangangailangan.”

We woke up today, April 20, with dismal news: the operations of the Maginhawa Street Community Pantry was temporarily halted due to safety concerns of its founder, Non, and the volunteers.

How can an initiative with a very straightforward cause of feeding the hungry result in threats and make its founder feel unsafe in the very community she wants to help?

The news was met with incredulity, especially by those who have walked for hours just to get something to put on their tables. How can an initiative with a very straightforward cause of feeding the hungry result in threats and make its founder feel unsafe in the very community she wants to help?

But it is a reality experienced by many who have been helping the disadvantaged. Human rights defenders, environmentalists, educators, media workers and even lawyers have been red-tagged just because of their work in the communities.

This time, however, that threat is aimed at hundreds of people from different walks of life who simply thought that the idea of a community pantry is worth replicating.

And while many were disheartened – some perhaps afraid, too – those behind the pantries continue to believe in the shared vision of giving others a platform to help those in need.

It is understandable if some are having second thoughts on opening up a pantry. But we hope that no one will be discouraged.

At the end of the day, our shared vision remains: we want to help in whatever way we can.

We urge others to continue setting up pantries. There is no shortage of people who are willing to spare a few kilos of rice, canned goods or vegetables freshly picked from their gardens. 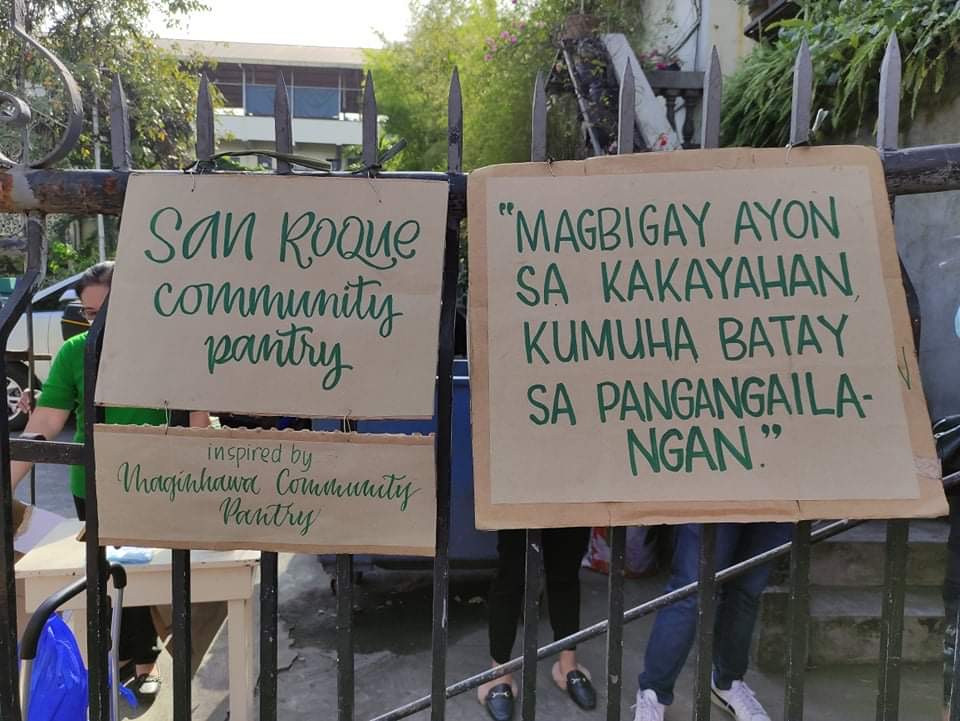 Here are some practical tips for those who want to set up their own community pantries:

Janvic Mateo is a journalist for The Philippine Star and OneNews.ph. He is a co-founder and the current executive secretary of the Caloocan Young Leaders Initiative.

REVIEW: 'Leonor Will Never Die' is an ingenious love letter and critique to Philippine cinema and society