At a Zoom press conference, SC Spokesperson Atty. Brian Hosaka said that “out of 15 members sitting in the meeting today, I was told that seven fully concured in the dismissal while eight concurred in the result.”

He said he was not authorized to give more details but a copy of the decision will be uploded on the SC website.

“The parties will be provided with copies of the resolution or decision,” he said. 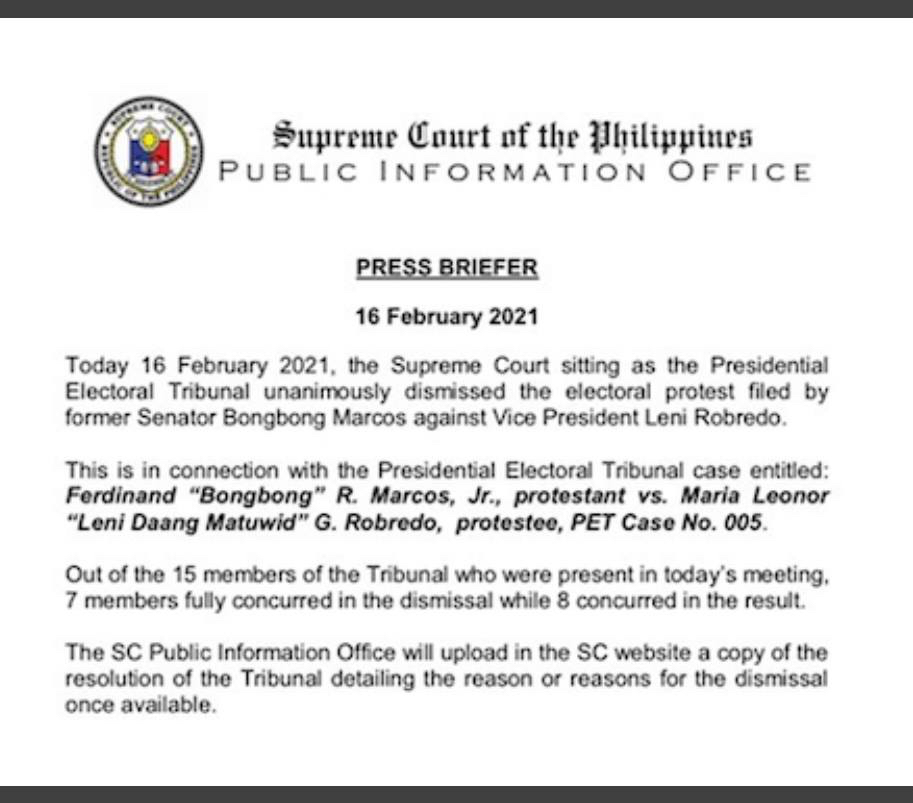 Marcos, in the third cause of action in his election protest, claimed that the elections in three provinces—Maguindanao, Lanao del Sur and Basilan—were tainted with terrorism, intimidation, harassment of voters and pre-shading of ballots among other electoral fraud.

Prior to this, a recount in the provinces of Camarines Sur, Iloilo and Negros Oriental widened Robredo’s lead by some 15,000 votes. Robredo’s camp then asked for the immediate dismissal of the case.

Philstar.com reported that the election tribunal in September 2020 ordered the Commission on Elections and the Office of the Solicitor General to file their comment on the issues related to Marcos’ third cause of action in his poll protest.

In an October 2019 resolution the PET said, “After the revision and appreciation, the lead of protestee Robredo increased from 263,473 to 278,566.” It added that it will “comply with its constitutionally mandated duty allowing the parties the opportunity to examine the results of revision...as well as comment so that they are fully and fairly heard on all related legal issues.”

On Aug. 16, 2018, President Rodrigo Duterte said he would reign if Marcos won his election protest and was declared vice president.

Former Supreme Court Spokesperson Atty. Ted Te tweeted as the SC decision was released, "I think the key word in the official announcement of PET decision ( 0005) by the CPIO would be “unanimous," and that he was pleasantly surprised by the SC decision. 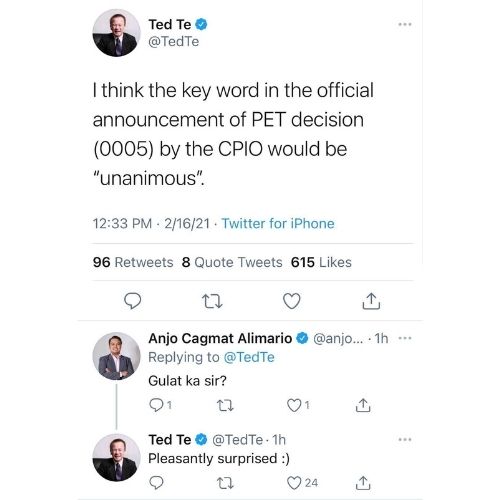 This is a developing story and is being updated.