TV host and actress Toni Gonzaga has hinted at being “unbothered” over social media criticisms thrown her way for hosting the proclamation rally of Bongbong Marcos Jr. and his running mate Davao City Mayor Sara Duterte-Carpio at the Philippine Arena in Bulacan.

Gonzaga, who attended the proclamation rally with husband Paul Soriano, received mixed reactions for supporting the Marcos-Duterte tandem and senatorial aspirant SAGIP party-list representative Rodante Marcoleta. To recall, Marcoleta was one of the instrumental figures behind ABS-CBN’s shutdown in July 2020.

A number of Twitter users scored the actress for siding with the camp of Marcos Jr. due to the historical record of killings, human rights abuses and corruption during the Martial Law regime of former dictator Ferdinand Marcos.

To clarify, people are not trying to cancel Toni Gonzaga. They are calling her out for supporting a thief, tax evader, plunderer, and a corrupt politician despite claiming being religious kuno. Imagine the disconnect. #PulaAngKulayNgMagnanakaw #KulayRosasAngBukas

Tangina kinalibutan ako. It’s as if she was introducing us all to our death.

Let us highlight those last words:

Hearing “buhay na buhay ang pagmamahal kay Apo Lakay” from Toni Gonzaga after they played the Martsa ng Bagong Lipunan sounds even more chilling if you hear the tales of those tortured during martial law. Neri Colmenares was one of them. Please, never again to the Marcoses. pic.twitter.com/h2A1GqlZNo

Shame on Toni Gonzaga. But that's just my opinion as the author of Marcos Martial Law:Never Again, a brief history of torture and atrocity under the New Society. ? https://t.co/d8dLDkogvE

Gonzaga also came under fire for endorsing Marcoleta for senator, with some expressing their disappointment towards the actress. Many also pointed out how in July 2020, she called out the individuals responsible for rejecting ABS-CBN’s franchise.

“Sa lahat ng nasa posisyon ngayon, hindi namin makakalimutan ang ginawa nyo sa mga trabahador ng ABSCBN... Just like the positions of the people in power today, what we are going through will not last forever. Troubles come to pass, they don’t stay,” Gonzaga was quoted as saying.

as much as toni gonzaga's political views are opposite of mine, i will not stoop low to bash her. but this? the sisters were screaming at the top of their lungs for the renewal of ABSCBN but is okay introducing Marcoleta? nasaan ang integrity? change sides when its convenient? https://t.co/5pUUyweZfK

Watching Toni introduce Marcoleta, breaks our hearts again. It brought us back to those days when they lambasted our company ABS-CBN and our Bosses. This girl didn't care about our feelings. Palibhasa mayaman kana at dika naman nawalan ng trabaho. Konting hiya naman Toni Gonzaga. https://t.co/A4gNbG5MmX

Writer Jerry Grácio said Gonzaga should “resign out of delicadeza.” Gonzaga is one of ABS-CBN’s prominent celebrities and is known for hosting the reality show Pinoy Big Brother.

Well, hindi naman kasi benggador ang ABS-CBN. Kaya dapat ang burden ay na kay Toni. If she's endorsing politicians responsible for the shut down of the network where she works, she should resign out of delicadeza.

Broadcast journalist Marc Logan hit Gonzaga on Facebook, where he reposted an article on Gonzaga speaking up about the ABS-CBN layoffs.

Gonzaga hasn’t released a statement about her hosting gig at Marcos-Duterte’s proclamation rally, as of this writing. However, the actress reshared a post on her IG Stories describing her as “unbothered.” 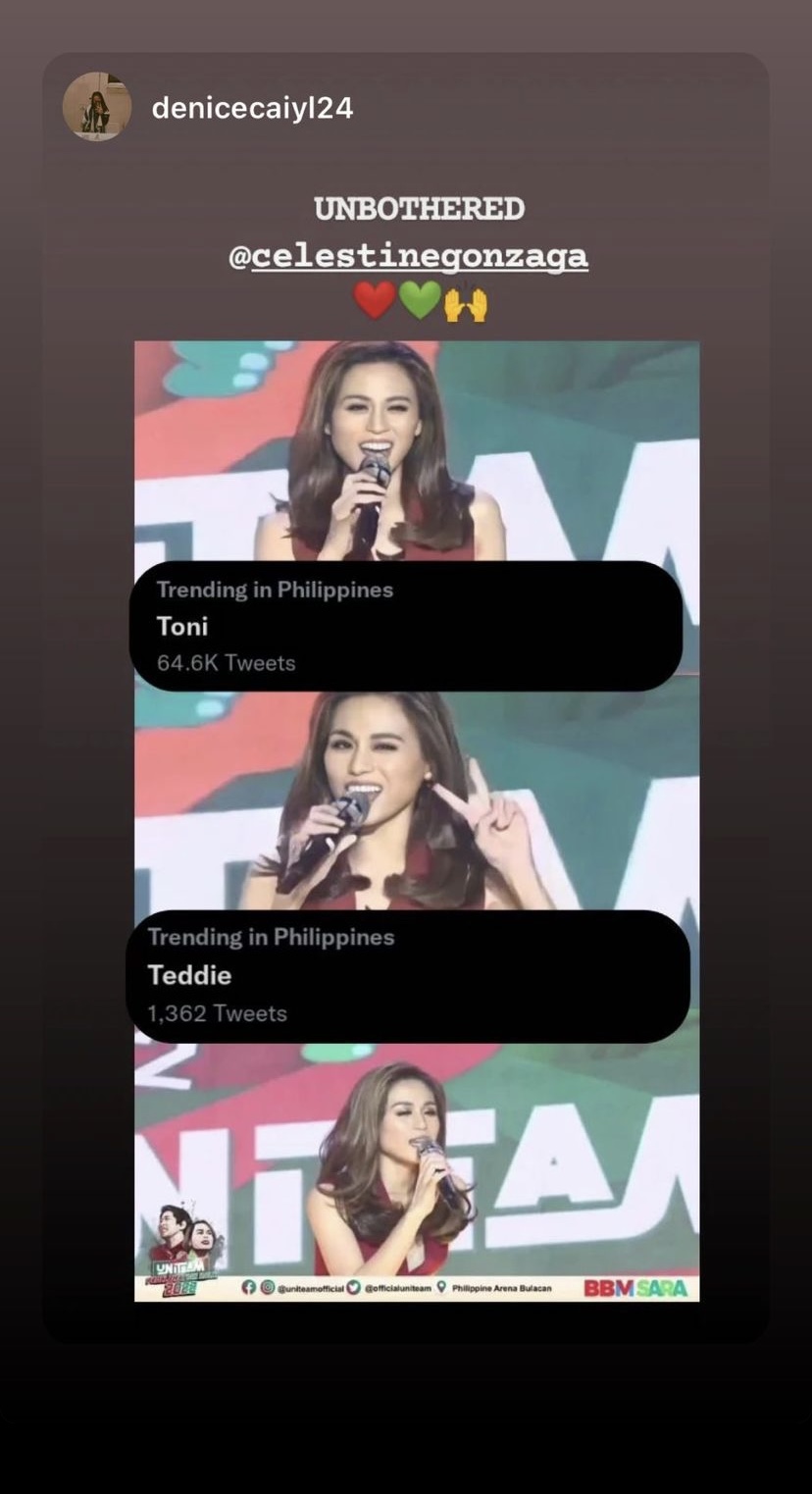 In a July 2021 interview with vlogger Will Dasovich, Gonzaga also said that it does not affect her when social media "cancel" her.

In Jan 2021, Gonzaga drew flak for supporting a PBB housemate who previously supported the shutdown of her home network ABS-CBN.

"It is not painful for me to be cancelled by society because I don’t cancel myself," said Gonzaga.

A number of netizens, meanwhile, expressed their support for Gonzaga who did a “good job.”

ONCE A PHILOSOPHER SAID:

"IF YOU MAKE YOUR ENEMY ANGRY, YOU'RE DOING A GOOD JOB"

Through her many years in the showbiz industry, the Ultimate Multimedia Star Toni Gonzaga proved that aside from acting & singing, being a host is one of the many things she does remarkably. She has a joyful spirit, a lively personality and a witty mind. #UNiTeamBBMSARA pic.twitter.com/g4jCcL88jw

Toni Gonzaga’s energy in hosting is very special. Glad she isn’t afraid of the cancel culture in this country.

Twitter user @pejobarahama said he “stands” with Gonzaga despite the criticisms on social media.

I stand with TONI GONZAGA.
We all have our freedom to support political candidates which we believe can make this country a better place to live. We don't need to destroy friendships and relationships just because we are supporting different candidates.

The hashtag #UnbotheredQueenToniG also became a trending topic on Twitter with over 6,000 tweets, as of this writing.

Prior to the proclamation rally, Marcos Jr. was interviewed by Gonzaga in a controversial episode of her web series Toni Talks in September 2020. The presidential aspirant was also a sponsor at Gonzaga and Soriano’s wedding in 2015.

LOOK: Celebs rally behind their candidates as 2022 elections kick-off campaigns

After 19 years, Mars spacecraft equipment's Windows 98-based software gets update