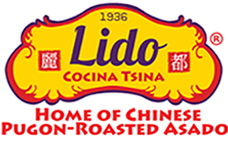 Lido Cocina Tsina, the home of pugon-roasted asado, has been serving legendary Chinese cuisine since 1936.

Popularly known as Panciteria Lido, this modest panciteria in Binondo was named after its founder, Cantonese chef Mr. Lido.

There, Mr. Lido served a tempting assortment of his classic Chinese favorites—noodles, wanton, guisado, asado—with a subtle hint of that smoky, sweet and salty flavor.

The legacy lives on

After eight decades, Mr. Lido’s legacy continues as families, professionals and the barkadas flock to the resto and its branches to satisfy their cravings.

All five senses come into play as soon as a guest enters Lido Cocina Tsina.

The sweet and smoky aroma of Chinese pugon-roasted asado wafts from the kitchen and into your nostrils. One almost imagines the thinly sliced cured meat and all the herbs and spices that go into the marinade—giving off stimulating aromas. There is also the nasal impression of something being cooked with wood.

At Lido Cocina Tsina, diners feast on panciteria food—noodles, rice meals and wontons—and so much more.

For special gatherings, diners can opt for Lido’s Oriental Feast selections, which combine these favorite dishes into a variety of bilao sets.

Lido Cocina Tsina stores are strategically located in key cities in Metro Manila and select places in Bacoor and Rizal.

Editor’s Note: This article was provided by Lido Cocina Tsina.

Explore Intramuros in style in this Filipiñana costume and tranvia tour

Attention, digital nomads: Here's how you can get a 10-year visa to work in Thailand