“Oh, early childhood! My brother always had a dog or two," Sharon Cuneta shares. "I always enjoyed playing with them. I have always loved animals."

How this interview took place is a story in itself.

I asked Ricky Lo, our entertainment editor, for a contact for Sharon, which he readily shared with me.

I texted Sharon. Sure enough, there was no reply.

However, I noticed that on the Instagram account of Philstar Lifestyle she would “heart” the photos. So I decided to send her a DM. What a welcome surprise! She replied.

"OMG I looooove my dogs! But unfortunately, my condo is such a warzone because of my gremlins (especially the youngest one!). Thanks sooo much! I SO LOVE PHILSTAR LIFESTYLE!"

The Philippine STAR: Could you share with us how and when your love for dogs began? Were dogs always part of your life?

Sharon Cuneta: Once, I saw a goat in our garage. Every day before and after school, I would pet and feed it. I don’t remember if I gave it a name. Because one day I came home and it was gone. Then I learned that it was butchered. So up to this day I can eat lamb but never kambing.

When and who was the first dog you fell in love with?

The first dog I owned was when I was in my pre-teens. She was a Japanese Spitz named Blondie (she was in my movie P.S. I Love You, where her name was Bubbles). When she passed, I was already married and KC was a baby. I mourned for a really long time. Like I had lost a child. Then I told myself I would never own another dog again because it would hurt too much to lose it.

Have you always had dogs at home?

In 1993 I made a movie with Rudy Fernandez. His last shooting-day gift to me was a Pomeranian from a champion line. I really begged for him to take it back and forgive me, but he would hear none of it.

I kept it and named him D-boy, after Daboy. Of course KC and I fell in love with him. Then I bought him a partner from a champion line, too, whom I named Sushi. They had a litter of, like, eight.

Every time I would get home from work, usually in the middle of the night, I’d get a big welcome in my parents’ music room where they stayed, from a bunch of noisy, excited, and very, very cute Ewoks!

D-boy passed after a few years. And then Sushi. So again I swore, no more.

Of course, when Kiko and I were newly married and I still had my weekly The Sharon Cuneta Show, a Japanese fan married to a Filipina gave me a male Shih Tzu whom he brought with him all the way from Japan.

I fell in love with Solomon, named him after Oprah’s dog, and nicknamed him “Sollie.” And when I got home that night, KC was asleep, and I gently put him on her chest and she woke up and smiled and held him and said, “Puppy!” He became the boss baby of the house.

He slept on Kiko’s and my bed and he was our joy. Then Kakie was born. I am still angry at myself for having been so ignorant then.

Sollie had to be “demoted” from our bedroom to our yayas’, because Kakie stayed in our anteroom. He lived for about 12 years. When he died, again, no more.

Were you able to stay away from dogs for so long?

When Kakie turned seven, I just had this nagging feeling inside of me that I had to get over my fear of losing a dog because I would be missing out on all the happiness it could bring us for many years. And I just had so much love to give. So I bought a Maltese. She was the sweetest. I named her Kaia. Then I bought a Chow Chow and named her Mochi. Then my friends gave me my male Bichon Frisé, Ari (after Onassis). Kaia passed away suddenly. Mochi is a biter. She is so protective of me and it’s my fault entirely because she was so spoiled she was mama’s baby girl. KC’s Chow Chow, Popo, is the opposite, because KC brought him to work with her all the time so he was well socialized. Mochi was not. They are both in our farm now.

Do your dogs help you cope with loneliness or sadness?

Always. They come to me and we cuddle and they make me happy. I actually wish I could have more. Big breed dogs and rescues. When I’m sad I watch dog-rescue videos with happy endings on YouTube. But for now, we can have only hypoallergenic dogs because my three younger children have asthma.

What lessons have you learned from raising dogs that have helped you raise your kids?

Having dogs and raising my kids are the same — one needs patience and lots of love.

You did a campaign in the past for PAWS and adopted a Chow Chow named Rosie. Tell us about it.

I adopted a Chow Chow who was a rescue from the Philippine Animal Welfare Society (PAWS) after they virtually brought her back from the brink of death and had her fostered by a loving mama. I named her Rosie.

You are also into K-dramas. I read an article that Hyun Bin has joined forces with a retired search-and-rescue dog to raise awareness against animal cruelty. Hyun Bin said, “I want to send my genuine concern and encouragement to the many people who are currently going through a hard time and I hope that search-and-rescue dogs will be able to live in a better environment as well.”

OMG, I am so happy that Hyun Bin is doing this campaign against animal cruelty! Gong Yoo has pictures with cats, though I don’t know if they’re his. I think that anyone who is gentle and loving towards animals must have a good, kind heart, and must be good to fellow human beings, too.

What do you think about animal cruelty?

Once, in LA, the kids were smaller and we went to a traveling circus that happened to be near our then home there. When the horses came out running around in a circle, there was also a zebra that apparently didn’t want to run with them. The trainer whipped him a bit to put him in place. And Kakie and I were crying our eyes out. I wanted to jump into the circle and bonk the trainer on the head while screaming, “It’s a zebra, you dork! People don’t ride him! He’s not supposed to be running in circles like the idiot that you are!” We were bawling. Never again. Unless Hugh Jackman's in it and has talented people and not animals.

The Yulin Dog Festival in China is also a source of animal cruelty. There is an FB page and YouTube channel No Dogs Left Behind. It’s evil. The dog rescuers are heroes as they intercept dog meat trucks where the dogs are confined in tiny cages. They are tortured, beaten up, skinned alive before being butchered to sell for meat for human consumption. I cry whenever I visit their site. PAWS rescues animals who have been abused. I wish penalties for those who subject animals to cruelty were worse.

During the lockdown and the many problems you face in your personal life, have your dogs been there for you?

The lockdown? Hahaha, that’s been my lifestyle since childhood. Even when I was in my teens and was finally allowed to go to parties, I preferred staying home. Might be hard to believe, but as talkative as I am in public (default setting na), I am actually a loner. My friends will have to drag me out of the house. And with my family and dogs here and my laptop, books and Wi-Fi? Complete! I have worked way too hard over four decades that this has been almost like a welcome vacation for me. No offense to everyone else. That’s just me.

You mentioned that there are six dogs that live with you in the condo now.

In our condo I have Daisy and her two female babies, Pippi and Halle. A mini golden poodle named Cookie, and a not-so-mini Amber Poodle named Twinkie. And of course, the only kuya, my Ari. He’s eight now. That makes me nervous. My Daisy’s six. Can’t help counting the years, because they are really like my babies. I don’t even want to think about losing any of them.

The dogs in the farm, do they help out with the farm work?

They are taken care of there but don’t help with farm work in any way. They’re clueless! We had an Aspin in the farm they had named John-D. So loving, affectionate and smart. About a month ago, he disappeared. We are all still devastated. John-D would always come back after making pasyal. And he was always our “welcoming committee” whenever we would visit the farm. 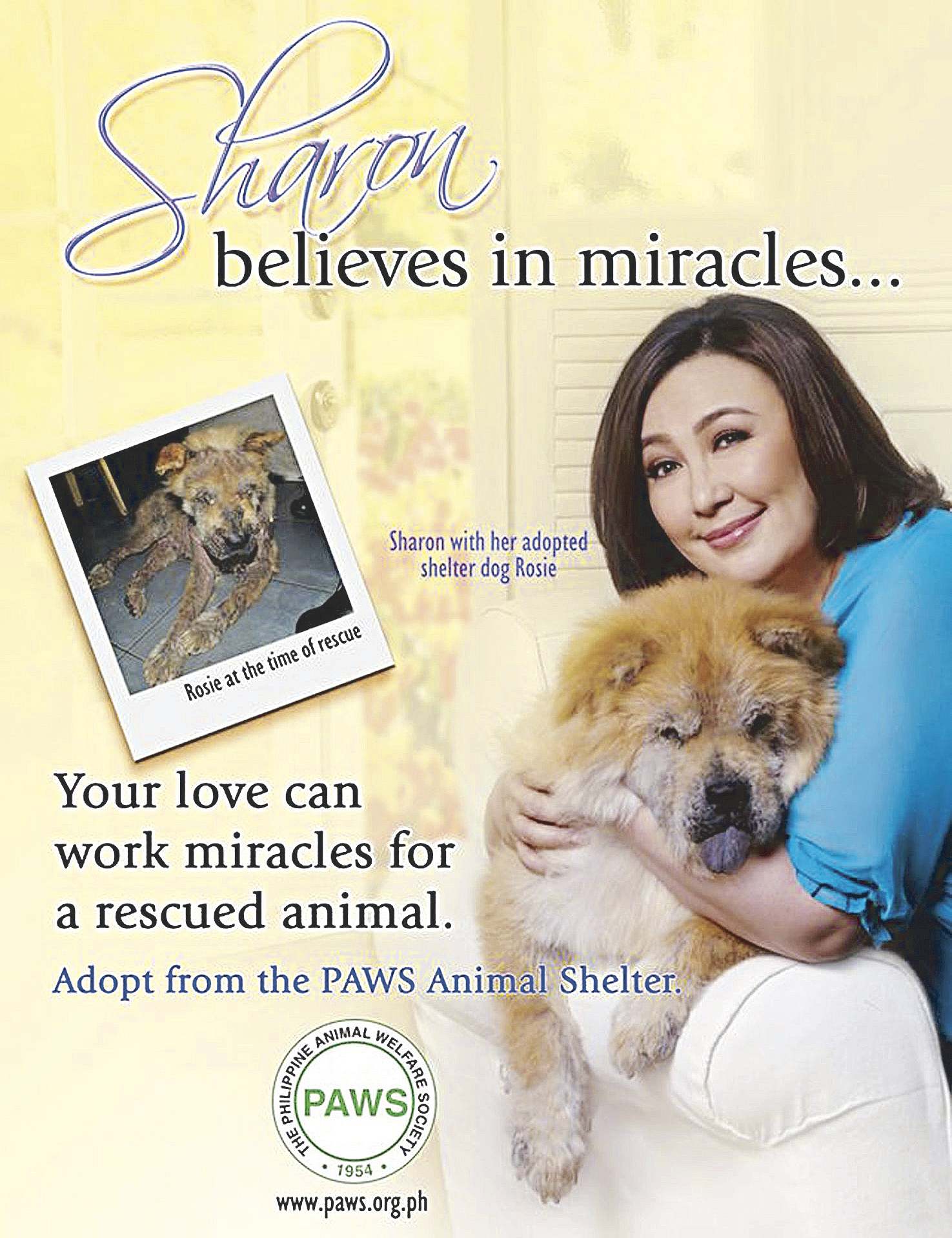 What is the most special thing you have done for your dogs?

In Wack-Wack before, I had an architect design a mini-house for the dogs like mine. Small lang. For Mochi and Bea. So they’d have their own place to sleep. It had a little air-conditioner, an exhaust fan and a toilet seat so when it was cleaned, madali na i-flush. They had separate kennels (rooms).

Big dogs I would like to have someday: a Golden Retriever, a St. Bernard, a Bull Mastiff, a Siberian Husky, an Alaskan Malamute, Chow Chows, a Samoyed, a Rottweiler, and a Pit Bull.

If I had a huuuge property just for dogs, I’d probably be like a mini version of PAWS!

What are your plans for your future with family and dogs?

The vacation house in Laguna that we had demolished a few years ago. We were going to build our forever home na there (fresh air for the asthmatic babies), and then I got into big debt, so walang pampagawa (investment properties din yung debts ko). It’s finally set to be built. Hopefully they can start this month if we are given the permits early. It will have a big kennel, a grooming area, and… a dog run!

Do you have any words of advice for fellow dog owners?

Take good care of your dogs and love them, and all you ever get back is loyalty and love. People betray and hurt you. Dogs do not; dogs are my kind of animal. I will probably be holding a dog or two on my deathbed, as I get a group hug from my family! I cannot imagine my life without them.