A farmer wearing his buri hat over his furrowed forehead. A carinderia server in her white cotton face mask. A security guard in his uniform and improvised face shield from acetate film. A barangay tanod wearing a plain orange T-shirt. A physician in her scrub suit and KN95 mask. A military serviceman wearing a surgical mask. An emergency response team member in a full-faced respirator. These are some of the masked faces painted on a once-drab wall in the busy corner of Ledesma and Jalandoni Streets in the city of Iloilo. These faces belong to the people hailed by the City of Love as modern-day heroes, worthy to be honored and immortalized through art.

The COVID-19 pandemic has cast the spotlight on members of the community that worked silently but passionately behind the scenes, figures who are overlooked and often forgotten. These people are not popular celebrities with  household names or social media influencers with millions of followers. They are not even people of affluence or people with illustrious careers. These modern-day heroes are ordinary people one might have come across in street corners or in market stalls everyday. Society has long placed a low premium on the work that they do. And yet, these people provide food for us, make sure we can sleep well at night by guarding our territories and take care of our health and well-being; they rush dyspneic patients from their home to the hospital in the middle of the night while we sleep; and they huddle in emergency rooms, in tight respirators and sweltering PPE, while we take comfort in our well-ventilated homes. These are the people who face the deadly virus every day, not because they want to but because they need to: the essential workers. 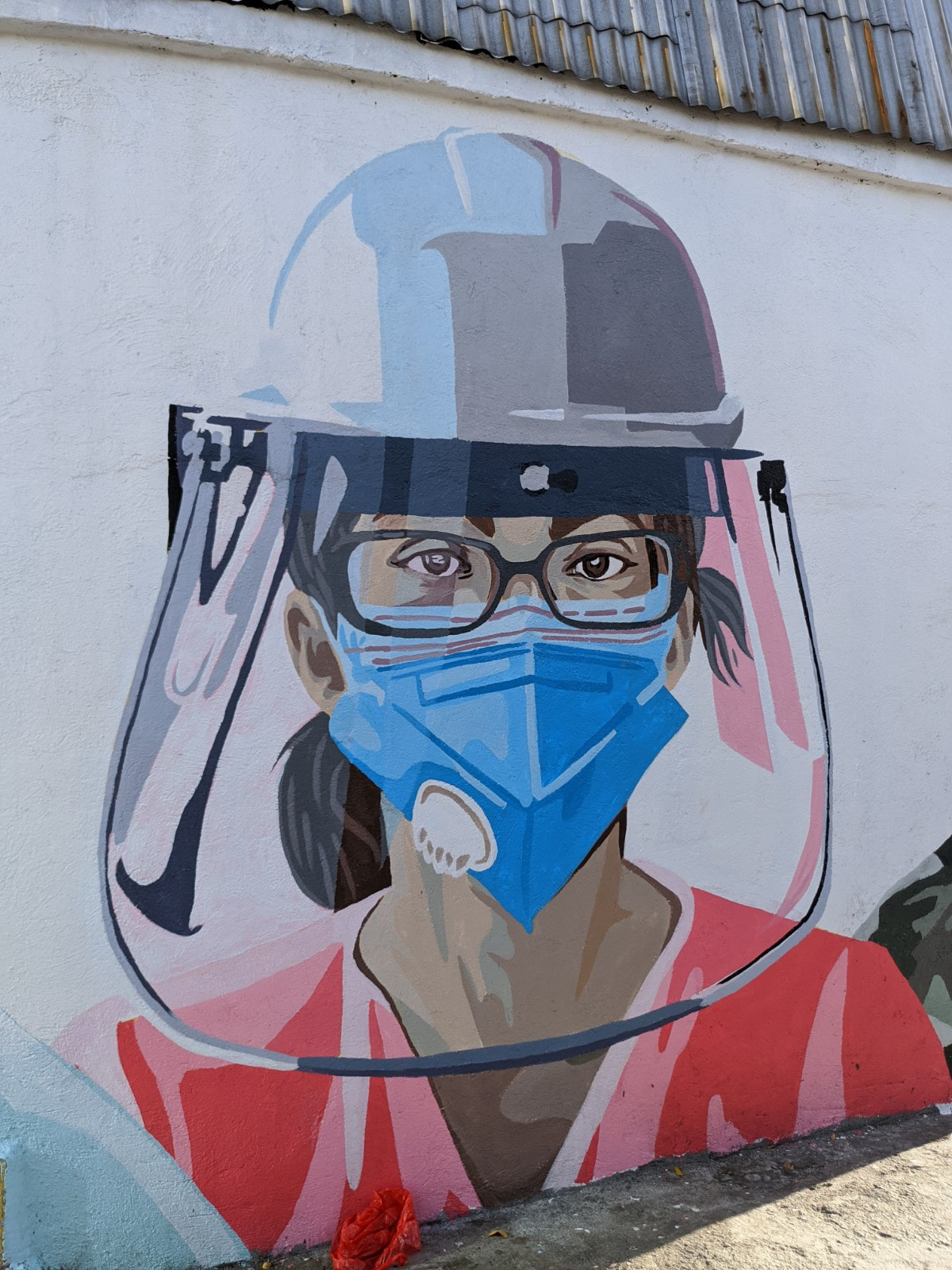 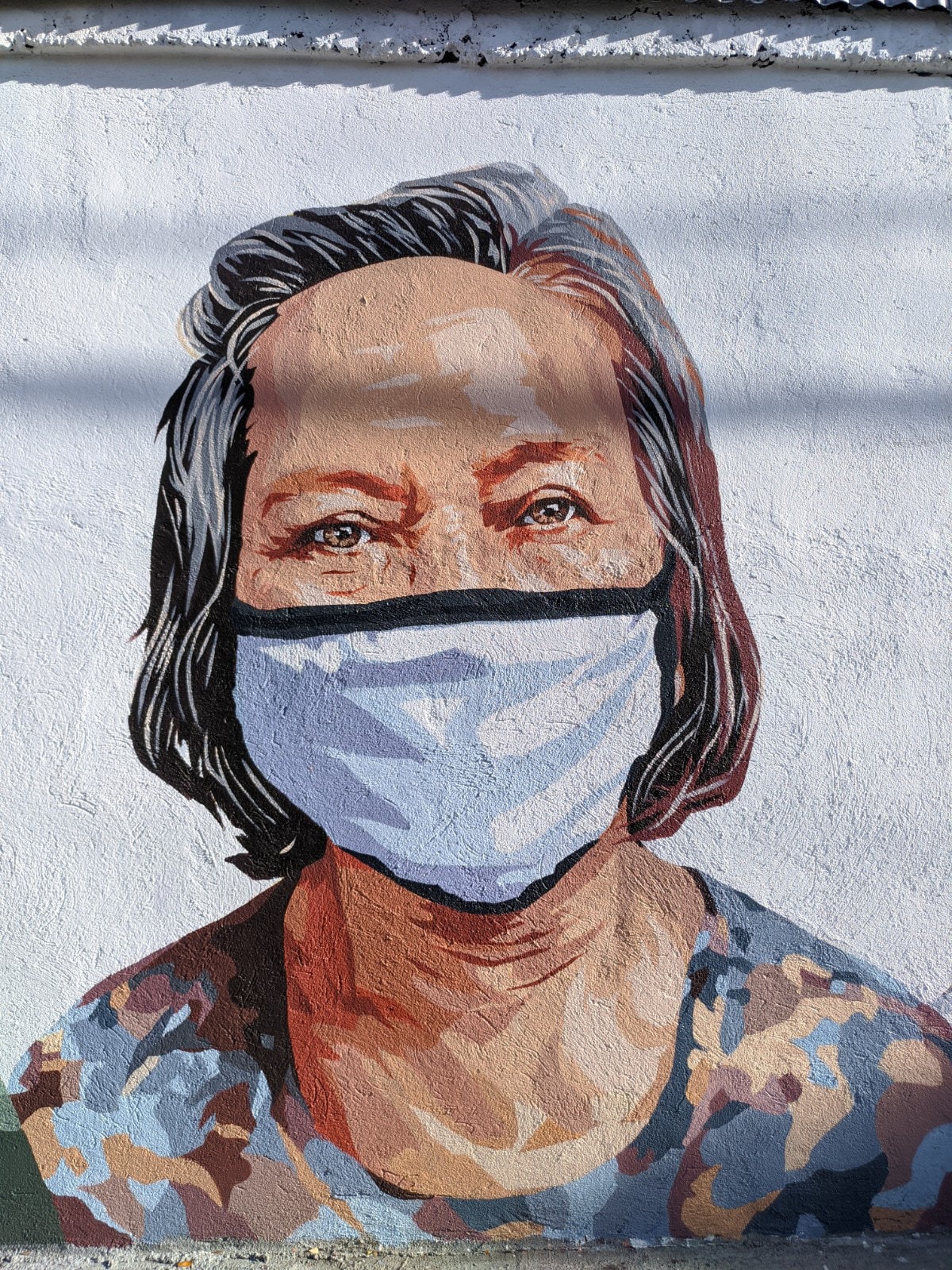 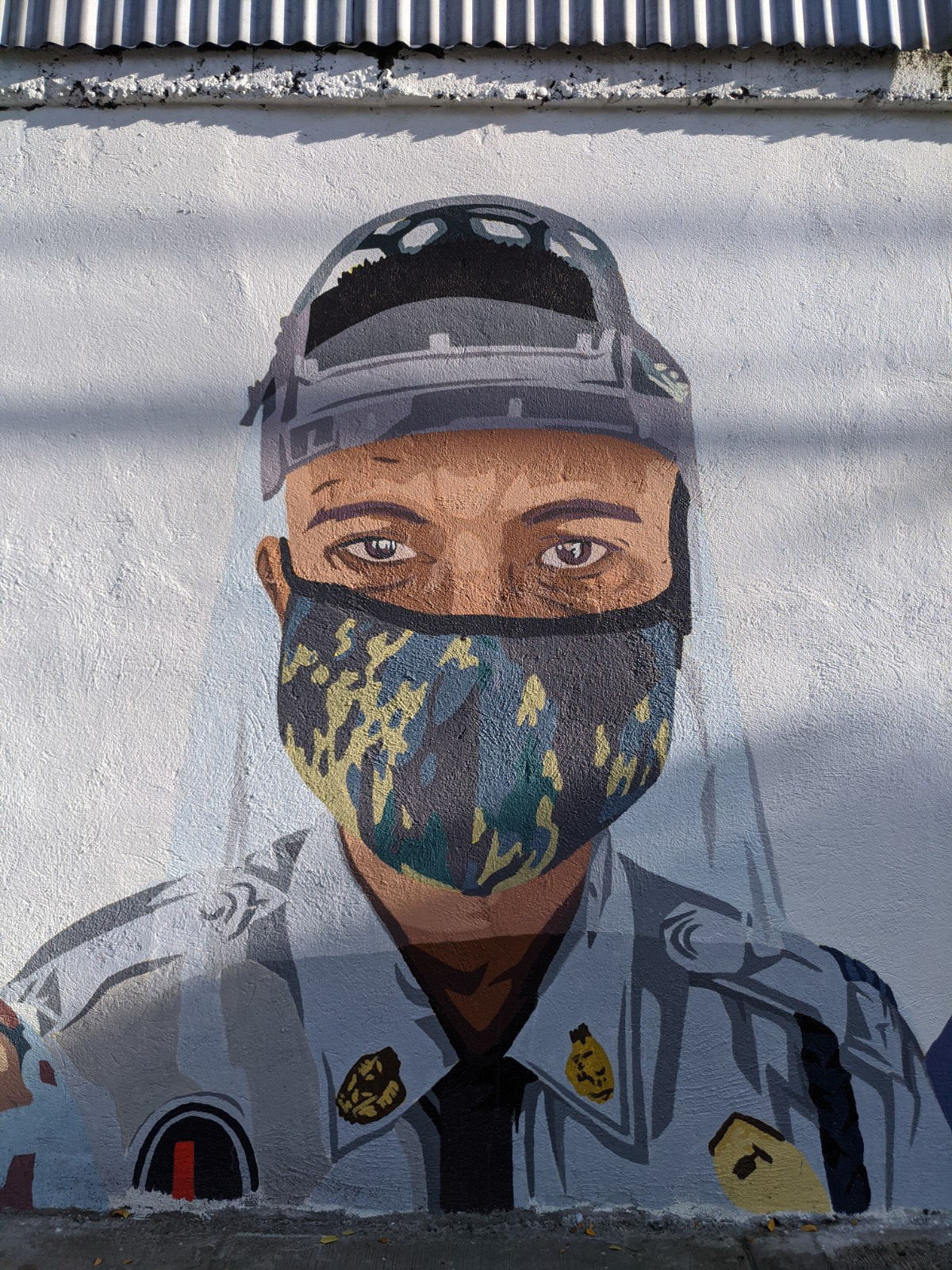 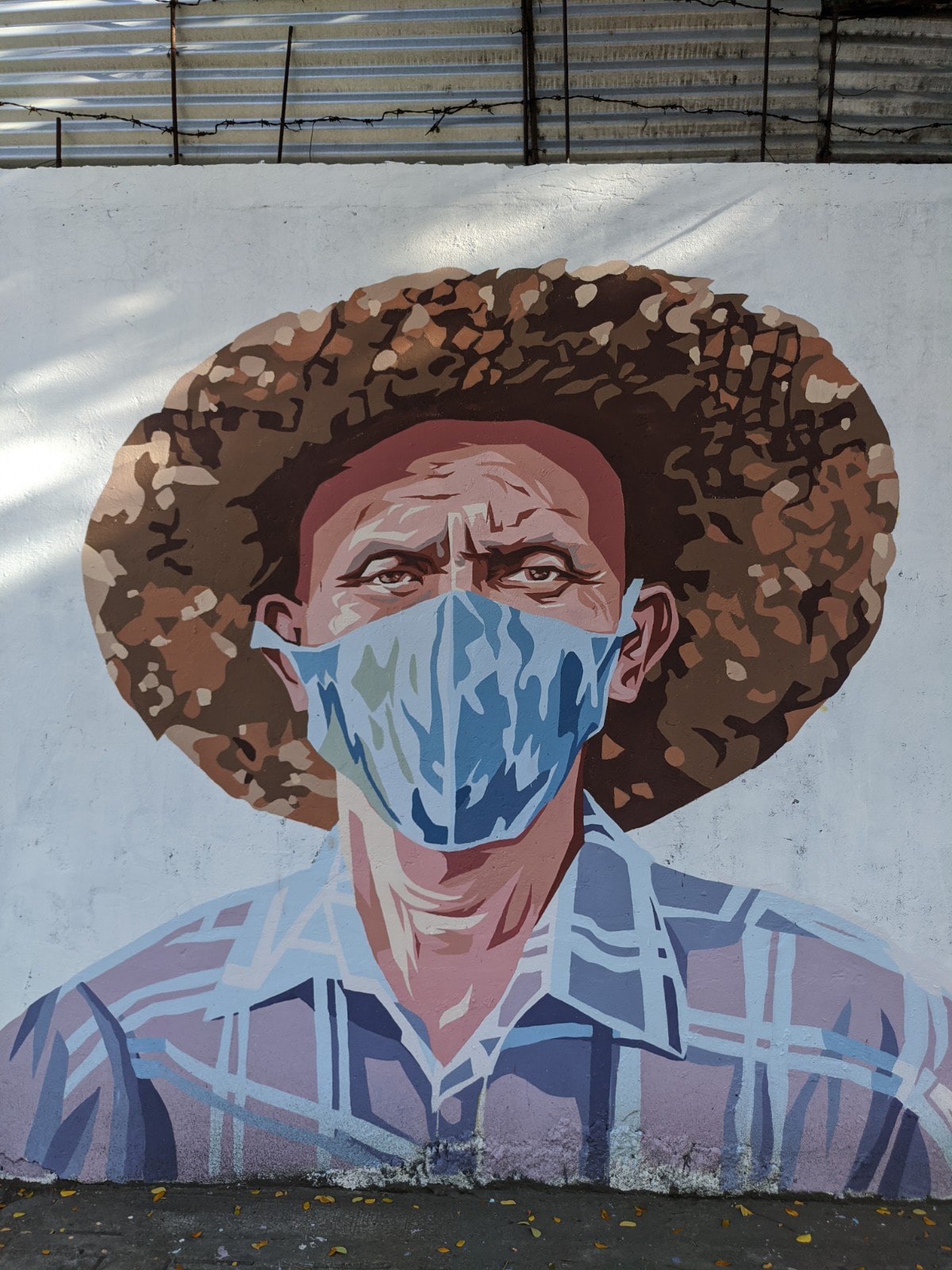 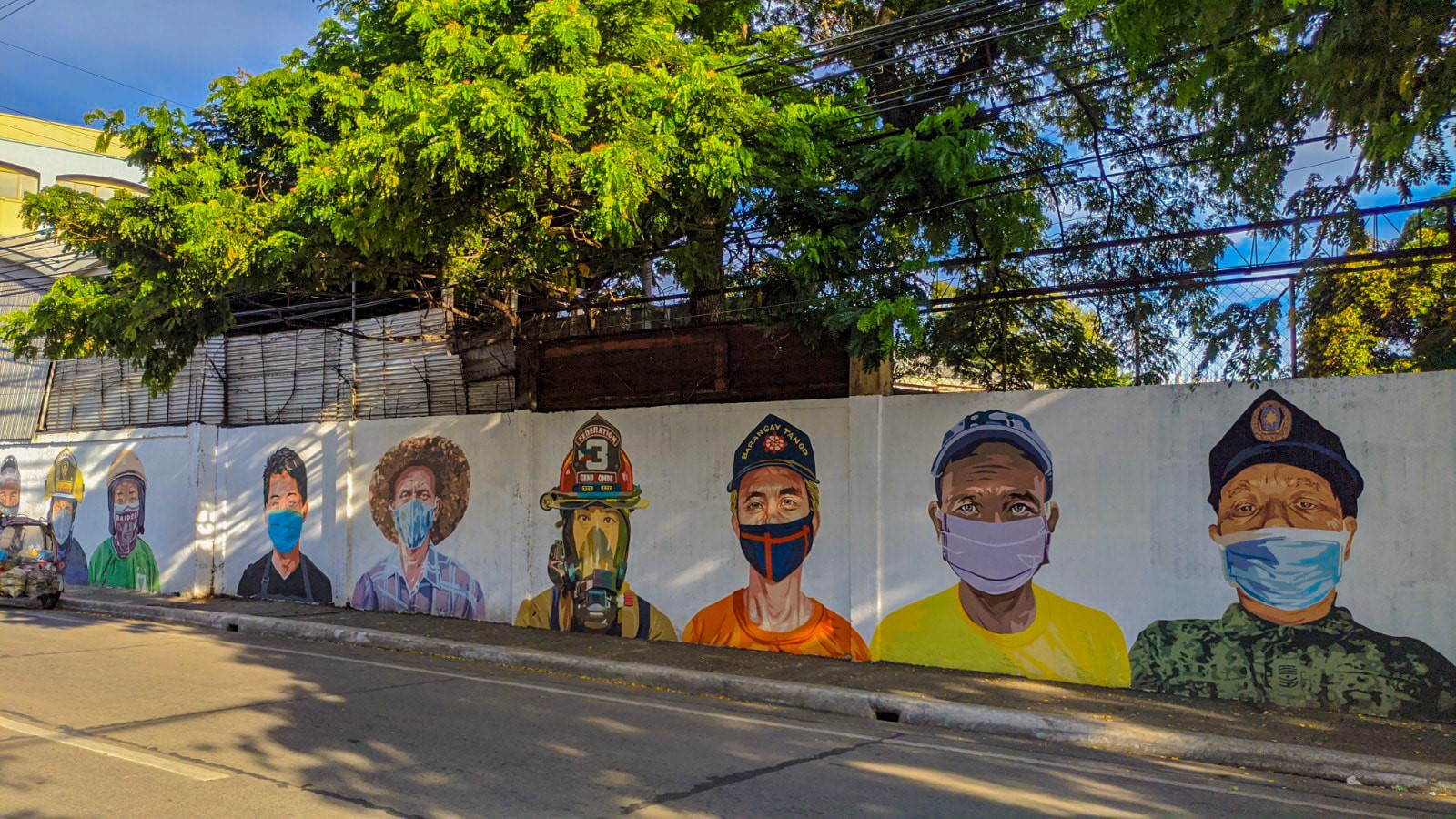 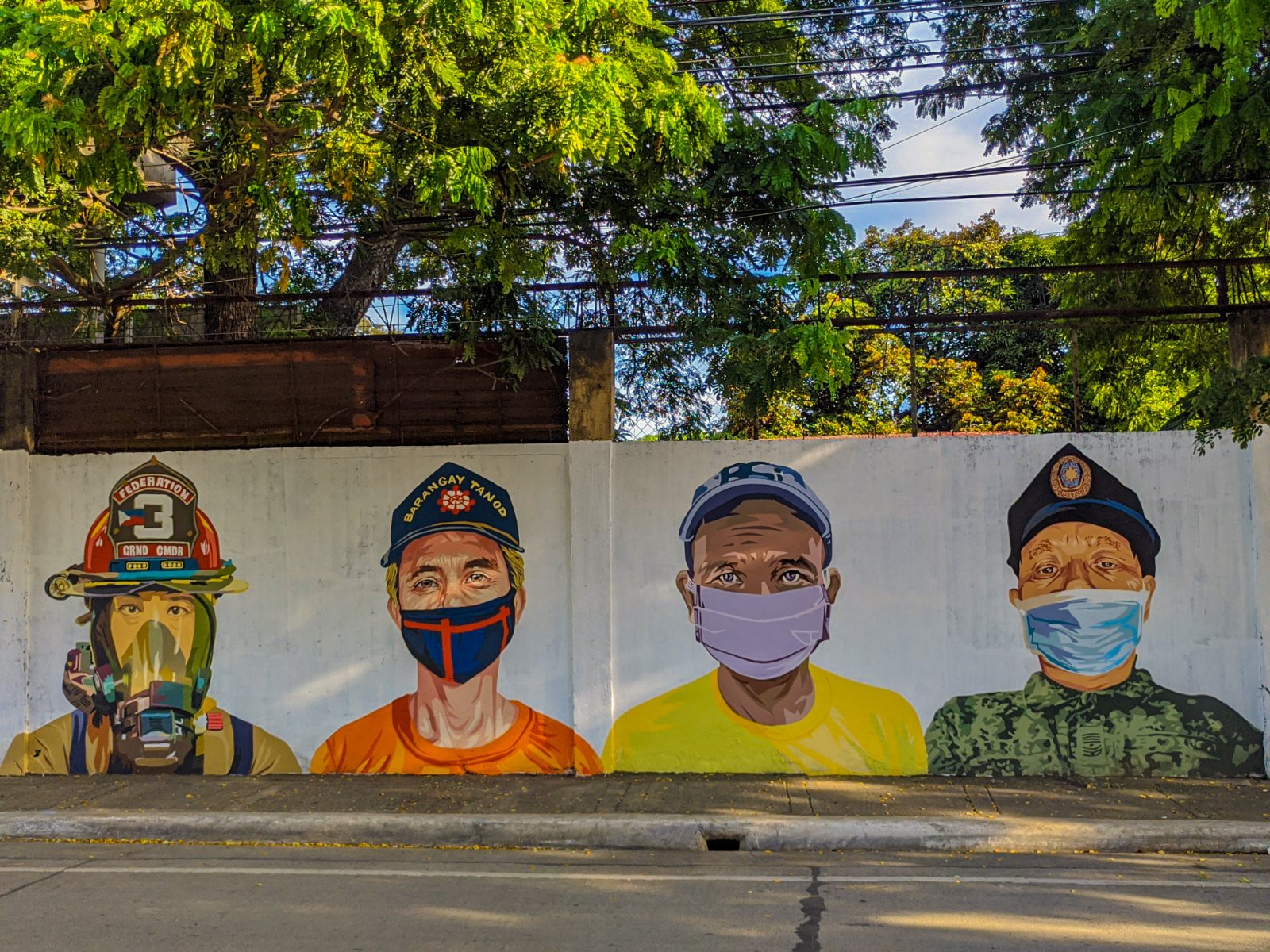 Ronn Bulahan, a young Ilonggo artist, spearheaded the painting of the mural, “Our Frontliners,” along with artists Carren Evangelista, Kinno Florentino, Mating Namo, Andreill Gequillo, Carren Evangelista, Eiche Apruebo, Noma Lisa and other members of the ABAY and Cycling HeARTS group. The project was the brainchild of Mayor Jerry Treñas, in collaboration with Ilonggo painter Rock Drilon and Francis Cruz. Davies Paints provided the materials and Zhong Hua Xiao volunteered the wall for the project. The location of the mural is fitting and symbolic, at an intersection in the old commercial hub of Iloilo near several wet markets, hardware shops and popular discount stores.

“Our Frontliners” is consistent with other Iloilo projects that aim to bring art closer to the people through murals along Muelle Loney and the downtown area, monuments of Iloilo heroes like Teresa Magbanua and Martin Delgado, historical building restorations, painted bike racks along Iloilo Esplanade and street art featuring prominent figures in West Visayan culture such as Panay Bukidnon and “Bayluhay” or the Barter of Panay by Marikudo to the datus from Borneo. The art renaissance in the city, along with the rise of several art museums in the city, including Iloilo Museum of Contemporary Art (ILOMOCA), Museo Iloilo, Museum of Philippine Economic History, Galerie de Arsie, Rosendo Mejica Museum, Omriel Art Gallery, Mamusa, and soon the Metro Iloilo Modern Arts Park (MiMA), have made Iloilo City a vibrant and prolific art hub in the country.

These are trying times. Citizens are forced to stay home. Travel plans are cancelled. Jobs are mercilessly lost. Lives unceremoniously cut short. This shining mural in Iloilo City is not merely an art project, but a hopeful reflection of today’s reality, not of a “new normal” but rather, a “better living” in the days to come, reminding us of the truly essential in life.

Long after this pandemic has ended, this beautiful mural in Iloilo City will remain, a lasting reminder of man’s capacity to create beauty from adversity and from the spirit of courage that boldly blazes within, even among the ordinary.

The author is an internist-gastroenterologist practicing in Iloilo City