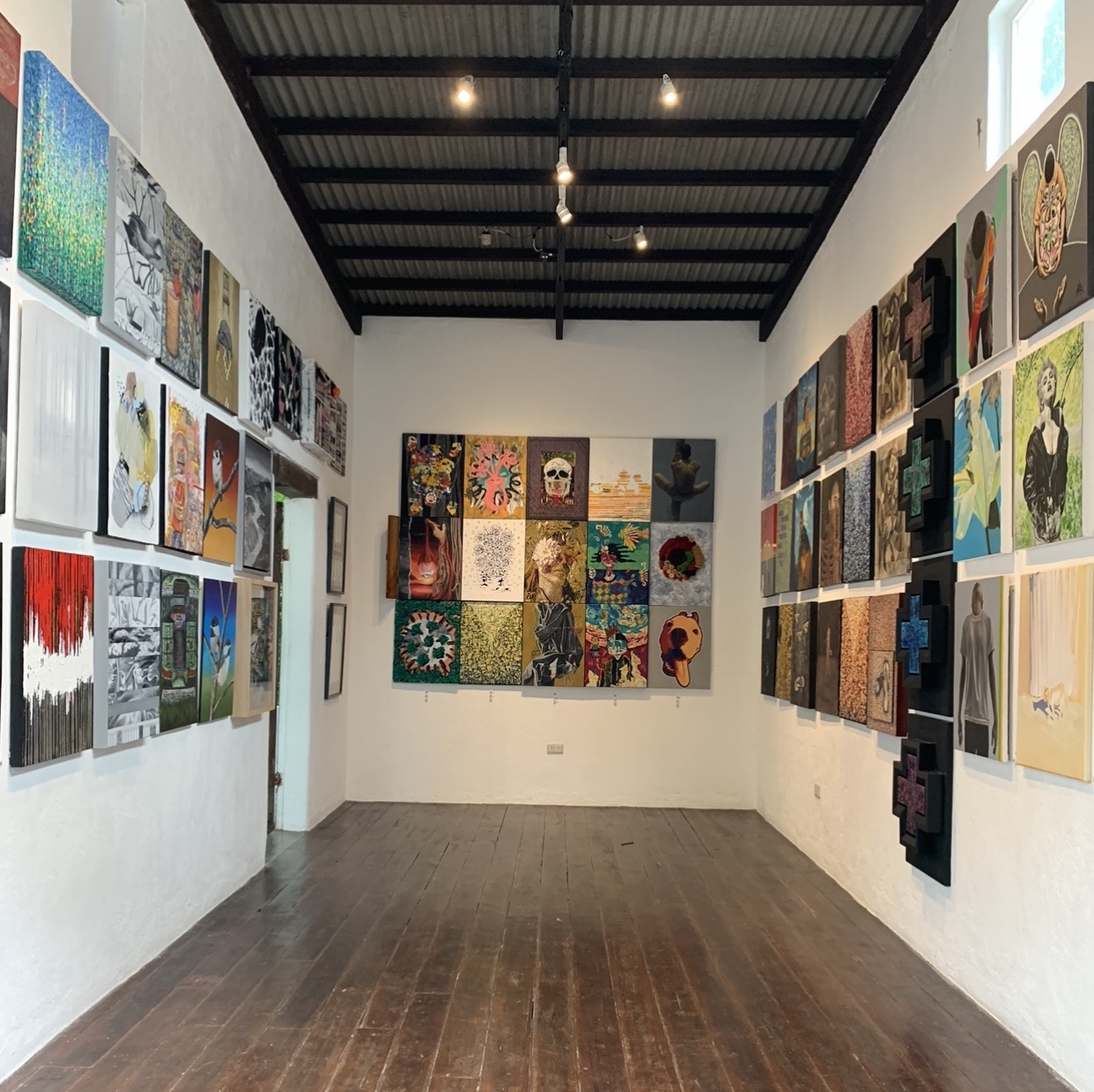 As the crowding of art fairs and auction houses (pre-COVID) and the proliferation of forgeries indicates, a significant sector of the Philippine art world has become so enamored with name recall that the painting on the wall becomes secondary to the “brand” of the artist. But what if you are given a chance to browse through significant art unencumbered by the noise of who’s hot or about to gain traction and simply immerse yourself in the aesthetic enjoyment of what’s in front of you? What kind of relationship with the work gets established? Would you be moved enough to buy a painting without initially knowing who created it?

This was the tantalizing idea behind the recent exhibition, “Connect With Your Heart: Sampayan Art Exhibit,” held at Pinto Art Museum. As the economy was slowly opening up during the general community quarantine, collectors trickled inside the famed Antipolo art space to encounter paintings and other works displayed among all the four gallery spaces reserved for selling shows, which were extended to the open garden by the pool of Dr. Joven Cuanang’s residence.

The title of the exhibition was an invitation for the viewers to dig deep inside, to let the heart lead in selecting which works spoke most intimately to them, without the baggage of having to consider the names behind the works. Capped at P30,000, the 500-plus works were made by artists of all stripes — from up-and-coming, to mid-career, to established — curated instinctively by Jim Orencio, without preference to seniority or prestige.

Without the artist’s name as a deciding factor, the collectors flitted from one work to the next, looking at the color palette and the subject matter and immediately snapping up what they liked. (Reservations were not allowed; paintings had to be bought on the spot.) The works of artists with identifiable styles were a magnet to the eye — these were effortlessly sold. But for the rest, it was hard to tell. Could you be purchasing a work by a young artist or a master? Mark Justiniani’s painting, for instance, was initially passed by a throng of collectors before someone with a knowing eye lit upon it.

It’s a failure of foresight to just look at the name. After all, the artists who are esteemed now began as young and upcoming practitioners.

None of it should matter, really. A serious collector would focus on a worthwhile work at the brush of first encounter. And the price tag of P30,000, already commanded by an artist in a first solo exhibition, wasn’t a discouragement either. It would be sweet, of course, to score a work by Elmer Borlongan for that amount. (Although, since his figurative iconography has become so recognizable, his drawing on paper got sold as soon as the museum doors opened.) Whoever the artist, it was the painting that had to work its magic.

Dr. Cuanang conceived “Connect with Your Heart” as a response to how the art market has become overheated through the years. Some collectors would ask him if he had a work by so-and-so artist, ready to sign a check for a work unseen or even not yet created. It has become all about the name. Such collectors are mostly investors counting on reliable blue-chip brands, risk-averse when it comes to the works of young artists or those they haven’t heard of. They have lost the thrill of looking intently at a work, discovering aspects of it that delight or move them. They buy with their ear, listening for record numbers, not with their eye. And just as with other investments, the works are probably stowed away, in a climate-controlled warehouse, only to be brought into the light when conditions are favorable. 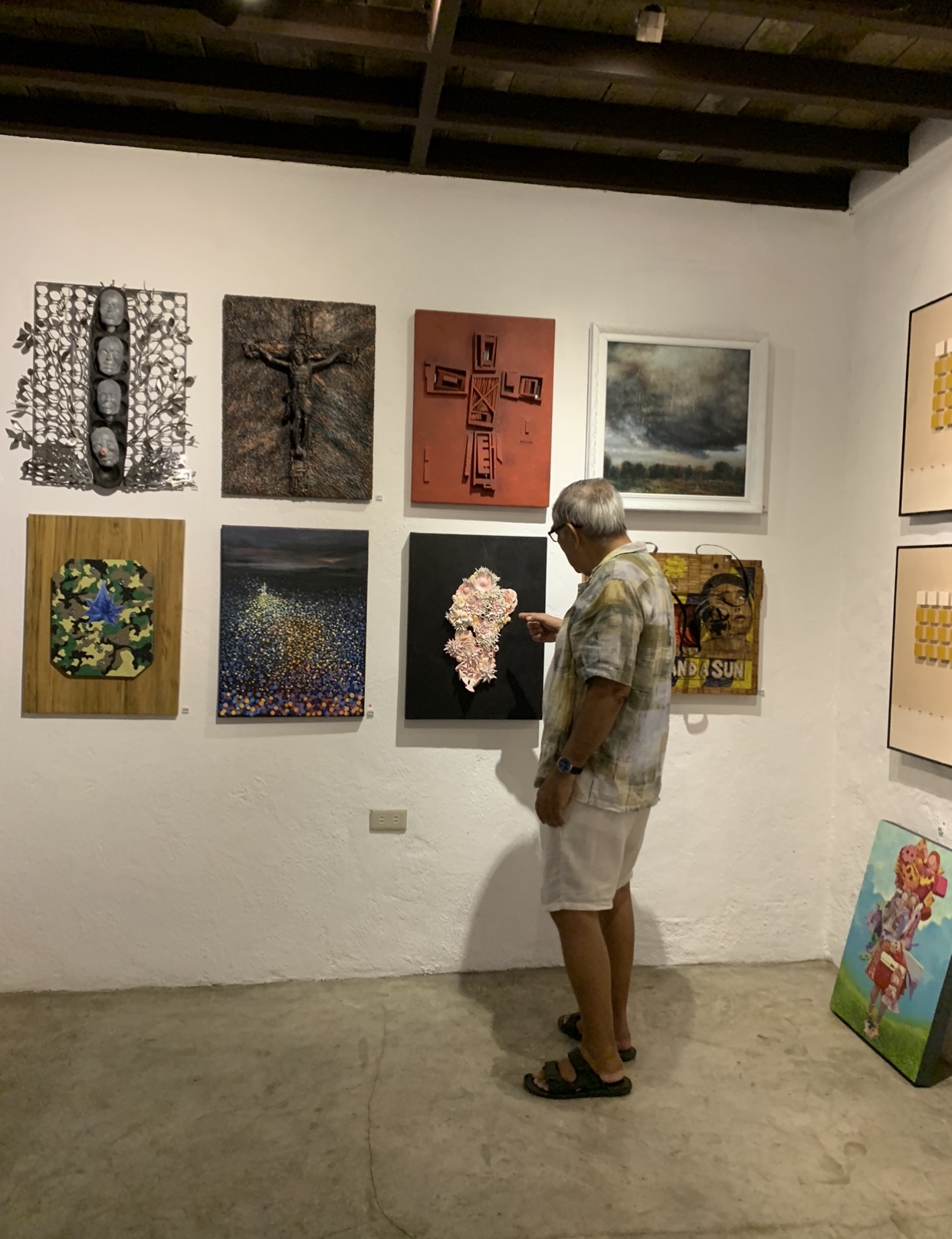 It’s a failure of foresight. After all, the artists who are esteemed now began as young and upcoming practitioners. Pinto Art Museum, arguably the country’s premier space for contemporary art, started as a casual place where feisty firebrands could congregate to paint and talk art. To support them to buy their art materials, Dr. Cuanang held a makeshift exhibit in which works were pinned to a clothesline. (Hence, the term “Sampayan” appended to “Connect With Your Heart” as a nod to this originating show.) Some of these artists — Borlongan, Justiniani, and Manny Garibay, to name just three — now dominate the scene. It’s not a stretch to think that their early works shown in the “Sampayan” exhibit would now fetch a pretty penny in the auctions.

“Connect With Your Heart” restored a space for true collectors to simply look at art for its own sake, perhaps the purest form of looking there is. Though the artwork will have been signed once it’s delivered to their doorstep, the collector can feel confident knowing that he or she chose the work based on its visual appeal sparking something within. Who knows? Down the line, those “anonymous” works might even soar in market value. In that case, the collector will have won twice over.

LOOK: This BTS-themed cafe in Tomas Morato is back and bigger than ever

FIRST LOOK: Mary Grace opens its 50th store in Tagaytay for your next tita trip with a view