A significant feature of the recent commemoration of the Magellan expedition’s landfall in our islands 500 years ago was the release of the book, Pigafetta’s Philippine Picnic: Culinary Encounters During the First Circumnavigation 1519-1521, as retold by Felice Prudente Sta. Maria.

Published by the National Historical Commission of the Philippines, the slim paperback also touts the inclusion of the first English translation of culinary words from Diccionario Bisaya-Español, as complied by Juan Felix de la Encarnacion, O.A.R. 1851/1885. It also starts with a Foreword by NHCP Chair Dr. Rene P. Escalante, Ph.D.

Pigafetta himself came up with a word list of 40 Cebuano culinary terms, including “Tinapai” as “a certain kind of rice cake.” Others are “Monoch” (chicken), “Babui” ((hog), and “Luia” (ginger). He writes that he found Cebuano food too salty, and preferred the taste of rice cooked in bamboo to that in clay pots.

But before he reached our part of the world in that intrepid voyage of discovery, author Sta. Maria details contextual backgrounding that provides culinary factoids and sets the tone for the narrative.

We learn that arroz in Spanish was an Arabic term, that the Spaniards planted rice in Pisa’s Lombardy plain in 1468, the first time it was done outside Spain in Europe. “The Arborio rice variety would thrive in the Po valley, making risotto possible.” 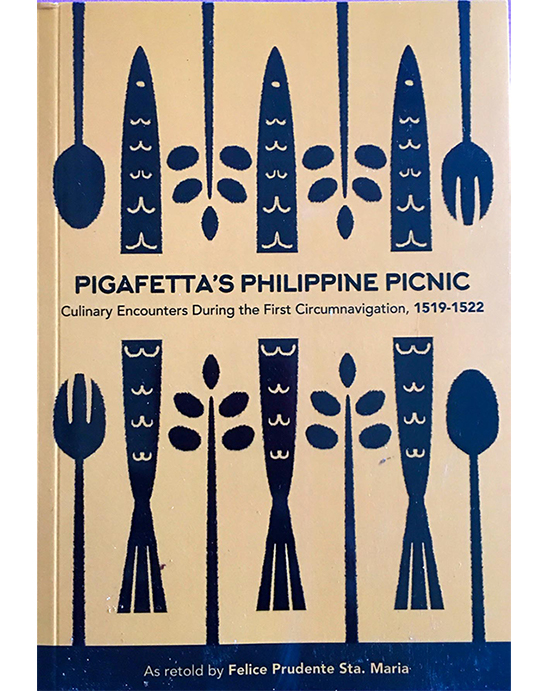 Leading up to the Renaissance Period, “Spain had been described as like God’s Paradise with an overflowing abundance of every good thing…” — with its natural resources, crops and game, plus items that kept coming from foreign lands, among these saffron and sugarcane.

A yearning for other Oriental flavorings spurred the maritime ambitions that sought cinnamon, clove, nutmeg and other exotica that were reputedly plentiful in the Spice Islands.

Sta. Maria presents the comparative development of European culture, peaking with the Renaissance, and similar advances in India and China leading to the 16th century, as reflected in the flowering of cuisine.

Faint stirrings of a humanist impulse were not far behind.  “In 1519, the year the Armada de Moluca departed, Bartolome de las Casas (1486-1656) was appointed by Charles V as priest-procurator of the Indies. The religious was a critic of how colonialism was being implemented.”

He argued against the encomienda system, the partition and distribution of royal lands. The Apostle of the Indians wrote: “All nations of the world are men and are thus defined once and for all. All of them possess understanding and will...”

It is this backdrop of singular enlightenment that author Sta. Maria posits as part of the character formation of Antonio Pigafetta of Vincenza, then yet to turn 30 years old.

“Who were the people Pigafetta encountered? Could he have cut through the exoticness and strangeness, the marvelous and the malevolent, and relate person to person with them? Meals are a meeting ground for the common human spirit.”

As Pigafetta recorded, the five ships of the armada sailed from Seville, propitiously enough, on a Monday, Aug. 10, 1519, the feast day of St. Lawrence, patron of cooks.

The vicissitudes that challenged the mariners are related as they found a way towards the Pacific. Rounding what is now known as Patagonia, “Magellan named the giants Patagoni, meaning having large feet.”

When Pigafetta describes his captain-general as only reaching the waistline of one of these giants, one begins to wonder if the eventual chronicler is an unreliable narrator, or only given to selective hyperbole.

Food was the first Filipino gift to the first Europeans in Philippine territory.

After three months and 20 days of the Pacific crossing, the ships reach the Mariana island group on March 6, 1521.

Magellan names the islands the Ladrones, for its cunning thieves. On March 16, landfall is made in Samar and Homonhon — on the Sabbath of San Lazaro, after whom the archipelago is initially named.

Nine natives approach the ships in boats, offering provisions. “These were the first Filipino ancestors whom the Spaniards met... (T)he natives presented an initial sampling of Philippine savors: fish, two coconuts, a jar of palm wine... and bananas...

“Food was the first Filipino gift to the first Europeans in Philippine territory.”

Sta. Maria is consistent with her thesis on how food often becomes the subtle harbinger of history as a continuum of encounters.

“Pigafetta provides the initial description of how the coconut (Cocos nucifera) is used in Philippine cooking. His book is considered the starting point for Philippine food history as no other document written earlier with multiple culinary entries has yet been found.”

On a Holy Friday, Pigafetta pigs out (not sorry; couldn’t help that) on Rajah Colambu’s balanghai by the beach, shrugging off his transgression of faith in favor of tact. He and a companion from the Trinidad are fed pork twice, the second time with broth.

He notes that “Live laghan sea snails found attached to the hearts of dead whales were a delicacy.”

Yet he never cites what surely had been part of the seafood diet in the islands, such as sea urchin roe, sea cucumber, scallops, clams and mussels.

Why, not even shrimps, lobsters and squid. Apart from chicken, pork, goat and root crops, it’s all just fish, grilled or stewed.

“A Genoese pilot enumerated what Magellan demanded: three goats, three pigs, three loads of rice, three loads of millet, and other provisions. On the island of Matan (Mactan), the town of Bulaia (Buaya), however, had not complied and was therefore torched by the foreigners.

"New interpretations suggest the same was done at Opon near the neighborhood of Lapulapu, a leader who was over sixty years old.

“On 26 April, a Friday, two goats were presented to Magellan. The giver, a chief from Mactan, explained they could give no more because Lapulapu refused to obey...” Followed the unexpected comeuppance; soon after Magellan told Humabon to watch how the Westerners did battle.

Pigafetta did not join the farewell meal hosted by Humabon “because his face was still swelling after being hit by a poisoned arrow.” Or so he claimed. He may have intuited the trap that was laid out for the supposed despedida.

While we owe Pigafetta his eyewitness account, the publication of which was preceded by that of an interviewer of the survivors who made it back to Spain, a paradox appears to sheathe him the way palm leaves encase tropical produce before roasting.

For a chronicler who includes likely fiction (as with the number of Lapulapu’s combatants as well as these protagonists’ exact body count in an ongoing battle), he was certainly scant with other documentation, even the reasons why Magellan and Elcano, in completing the circumnavigation, kept shifting from diplomacy to arrogance and back again.

No matter. Felice Sta. Maria has rewarded us with an account that whets then fills up both our gustatory imagination and memories of adventure.

Alongside Ambeth Ocampo’s appreciation of microhistory, zooming in on what Rizal requested as food items from his sisters, or writing books titled Aguinaldo’s Breakfast and Quezon’s Sukiyaki, she raises the flags high over voyages of reckoning with human appetites and relations.

Photo courtesy of the National Historical Commission of the Philippines

4 DIY food kits for when you feel like cooking

Home shopping in the add-to-cart age