This unprecedented year of so much uncertainty due to the COVID-19 pandemic kept people apart. With so much space in between, it is through social media where most of us found connections and togetherness.

SB19, which recently landed at No. 6 in Billboard’s Social 50 Artists for 2020, led Twitter’s Top 10 list of most tweeted about accounts in the country. Showbiz personalities in love teams like Maymay Entrata and Edward Barber as well as Maine Mendoza and Alden Richards, trailed behind the P-pop group. 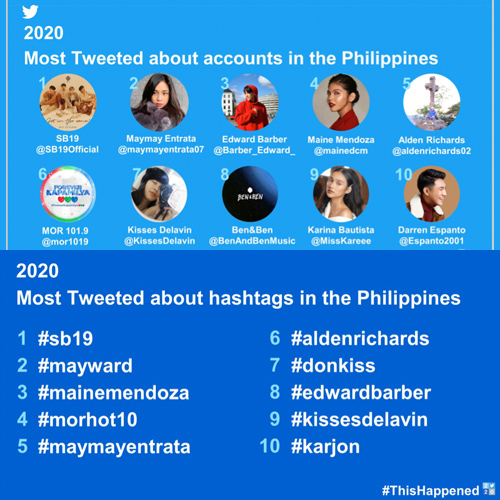 Entertainment continues to bring positivity to fans as seen in the most tweeted about hashtags in the Philippines, which again, was topped by #SB19. Thanks to their fans’ unwavering support, love teams also prevailed as #MayWard, #MaineMendoza and #AldenRichards, among others, were part of the Top 10.

Emojis, which will be turning 21 years old in 2021, have become a way for people to express themselves on social media. This year, the most used emojis on Twitter in the Philippines—from laughing to loudly crying to smiling face with heart-eyes—reflect the roller-coaster of emotions that was brought about by what’s happening not just in the country but also around the world. 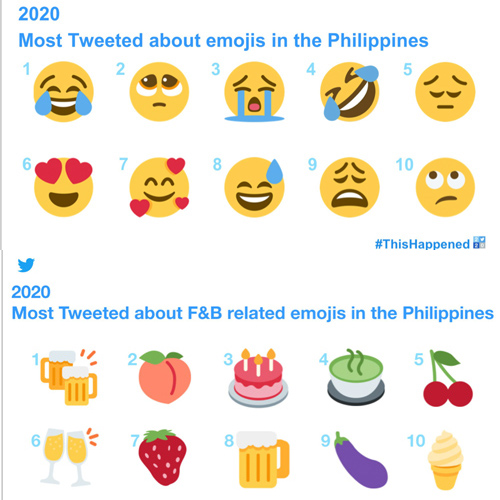 According to Twitter, the face with tears of joy emoji was the most used in the Philippines, which shows that no matter how hard this year was, many still found a reason to laugh. (Twitter also revealed that tweets expressing being grateful or thankful increased by 20 percent globally this year.)

Filipinos on Twitter also used F&B related emojis to express how much they miss gathering together and to accompany their tweets related to celebrating moments such as birthdays and other small wins. The clinking beer mugs emoji may have occupied the top spot but one must not miss that also part of the Top 10 most tweeted emoji list in the Philippines are the peach, eggplant, strawberry and cherries, which are emojis frequently used as a sexual reference. 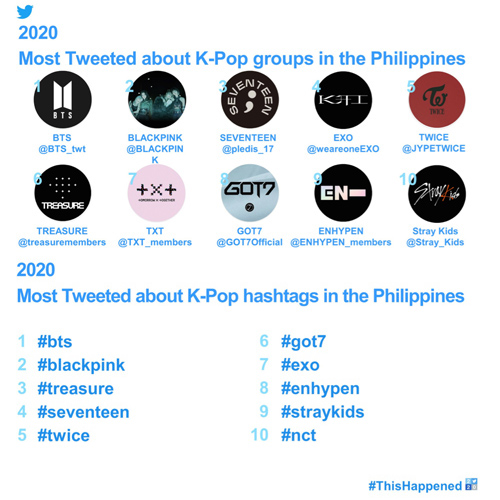 The year 2020 is undeniably the year that K-pop has cemented its status as a global phenomenon, having reached fans from all over the world. In the Philippines, history-making supergroup BTS, which has released two albums and several explosive singles during the pandemic, was the most tweeted about K-pop group, thanks to its loyal “Army” fanbase.

Filipino Blinks did not disappoint as phenomenal girl group Blackpink came in at No. 2 on the list that also included Seventeen, EXO, Twice, Treasure, TXT, GOT7, Stray Kids, and Enhyphen, which just recently debuted and are already on Pinoy K-pop fans’ radar.

#BTS and #BlackPink were also the top most tweeted about hashtags in the Philippines.

WHO IS THIS KID!!!!!? YOU ARE OUT OF THIS UNIVERSE WHOEVER YOU ARE ❤️ pic.twitter.com/4zHfaXVSw0

One of the highlights of the year for the Philippines include Grammy-Award winning singer Sam Smith’s tweet about a Filipino boy singing his song Too Good at Goodbyes, which went viral and has become 2020’s top retweet (284,000 as of this writing) and most liked tweet (more than one million likes) in the Philippines. “Who is the kid!!!!!!? You are out of this universe whoever you are,” Sam Smith tweeted with a heart emoji. This tweet is also one of the most engaged tweets in Southeast Asia.

I got catfished: a (really long) thread pic.twitter.com/5BQ2G5kcif

Another tweet that made rounds online while the country just started what would become the longest lockdowns in the world is that of Jzan Tero, whose honest revelation about being catfished became the top quoted tweet (currently at 117,000) for the Philippines.