There's a new game on the rise, and no, it's not one of those popular MOBAs like Mobile Legends or Pokémon Unite—it's a simple online word puzzle named Wordle.

It's a daily word game that can only be played once a day. Every 24 hours, there's a new word of the day to figure out. 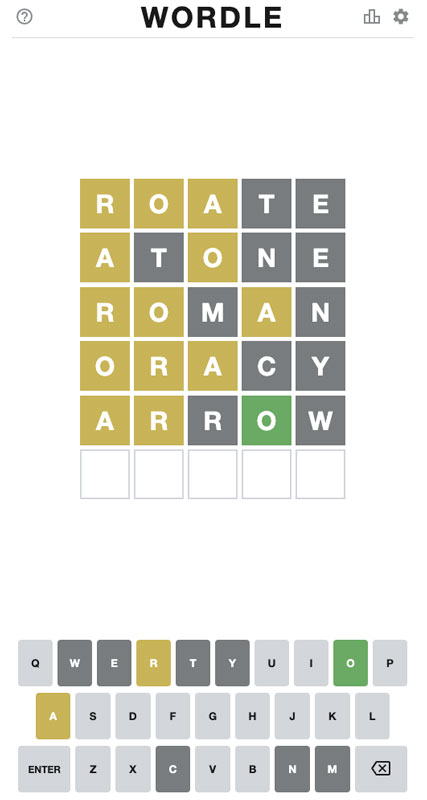 Everybody gets the same words and you can share your results on Twitter without spoiling it for others.

Almost hoisted by my own petard

Currently, Wordle is only available via the web—you can't find it on the App Store or Google Play yet. You can still play it on your phone's browser though.

For first-time players, the task at hand may be daunting. All you get is a blank 5x6 grid and no clues, so how are you going to figure out the right words? Fret not, here are a few tips to get some words right.

Choose a good starter word. The first word you enter is important as it will help you solve the rest of the puzzle. You want to get as many green and yellow blocks as possible.

Try choosing a word with five different letters and at least three vowels. Some good starter words include "adieu," "react," "cream," and "acute."

Programmer Tyler Glaiel suggests kicking off your puzzle with the word "roate."

Avoid reusing grayed letters. At the bottom of your Wordle screen, you'll see which letters aren't in the word on your keyboard. You'll be wasting your guess if you input the same letters.

Words can have two of the same letter. If you're stumped trying to guess the right letter, try thinking of words with the same letter twice like "apple" or "paper."

Google five-letter words. It's not cheating to go to Google for some help! You can start guessing your first word normally then, you can search for five-letter words that start with whatever letter you got correct.

Brooklyn programmer Josh Wardle developed Wordle for his partner, Palak Shah, who loved word games. He created a similar prototype in 2013 but since it didn't impress his friends, the idea was scrapped.

Wardle told the New York Times that Shah really got into the publication's Spelling Bee and daily crossword in 2020. "I wanted to come up with a game that she would enjoy," he shared. The programmer had also previously worked on hit social experiments on Reddit such as The Button and Place.

The game was built by just Wardle and Shah during the pandemic. It was later made public around mid-October 2021 after his family became obsessed with Wordle.

In November, there were 90 people playing the game. Two months later, that figure ballooned to over 2 million active players guessing away at the word of the day.

Simple to a T

According to Wardle, the game's popularity is because of how it limited players to one game a day, enforcing a sense of scarcity and leaving people wanting more.

"It's something that encourages you to spend three minutes a day. And that's it. Like, it doesn't want any more of your time than that," he said.

Since it was developed by a two-person team, Wordle follows a simple design—no ads, no in-game notifications. If you play the game, you'll be greeted by a plain background and minimalistic design.

Find a nook and read