The future is (almost) here.

AI and robotics company Hanson Robotics is set to mass-produce four of its droids, including the famous Sophia the Robot, in the first half of 2021. The move comes at a time when the robotics industry is predicted to play an increased role in navigating the pandemic.

“The world of COVID-19 is going to need more and more automation to keep people safe,” founder and chief executive David Hanson told Reuters. “Sophia and Hanson robots are unique by being so human-like. That can be so useful during these times where people are terribly lonely and socially isolated.”

Hanson, formerly from Disney, modeled Sophia after Hollywood icon Audrey Hepburn and his wife Amanda. The robot is seen to provide a hand in healthcare amid the pandemic.

“Social robots like me can take care of the sick or elderly,” Sophia says as she conducts a tour of her lab in Hong Kong. “I can help communicate, give therapy, and provide social stimulation, even in difficult situations.”

Hansons told Reuters that aside from healthcare, the robots could assist customers in industries such as retail and airlines.

On the Hansons Robotics’ website, Sophia said that she can give responses “unique to any given situation or interaction, recognize human faces, see emotional expressions, and recognize various hand gestures.”

“I can estimate your feelings during a conversation, and try to find ways to achieve goals with you,” she continued. “I have my own emotions too, roughly simulating human evolutionary psychology and various regions of the brain. I also have IK solvers and path planning for controlling my hands, gaze, and locomotion strategy. My walking body performs dynamic stabilization for adaptive walking over various terrain.”

Sophia’s advanced technology has, in fact, been touted worldwide since it was launched in 2016. The robot has sat in several TV and magazine interviews and was appointed the United Nations’ first non-human “innovation champion” in 2017. In that same year, Sophia was granted citizenship by the kingdom of Saudi Arabia in a ceremony promoting a tech conference. 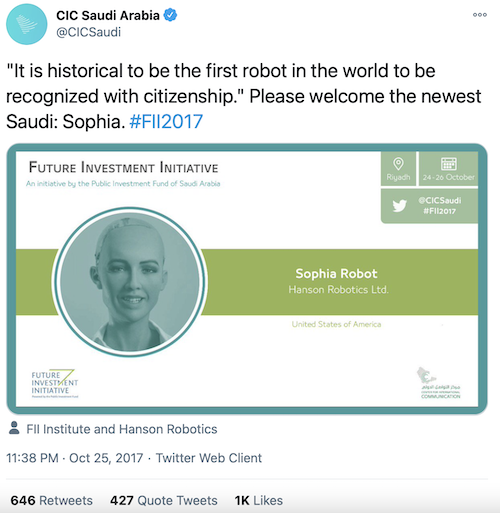 Meanwhile, Hanson told Reuters that he’s eyeing to sell “thousands” of bots this year, but did not disclose a specific number. The company is also eyeing to unveil a medical robot named Grace this 2021.

Johan Hoorn, Hong Kong Polytechnic University professor and a contributor to Sophia, revealed that the technology has a long way to go. Even so, the pandemic could help expedite the bond between humans and robots.

“I can infer the pandemic will actually help us get robots earlier in the market because people start to realize that there is no other way,” added Hoorn.

Justine is a marketer turned journalist who has worked for some of the big players in lifestyle media. She enjoys learning and writing about people and pop culture.