The Walt Disney Company held a special regional press and partner event for its Asia and Pacific regions on Thursday (Oct. 14) where it unveiled an extensive slate of global, regional, and local language content for Disney Plus.

Over 20 new APAC content titles were also unveiled including 18 Originals.

Highlights from the Disney Plus APAC slate include a strong selection of Korean titles, such as a documentary about K-pop super group BLACKPINK; Moving, a Korean action series about teens with mysterious powers. Other originals icnlude anticipated K-drama romances, including Snowdrop, starring Top Korean actor Jung Hae-in and BLACKPINK’s Jisoo; and Rookies, a romantic drama set at an elite police academy that stars K-pop sensation Kang Daniel.

There will also be a wide range of original stories by top content creators from the region, in addition to the vast library of branded content from Disney, Pixar, Marvel, Star Wars, National Geographic, and Star.

According to The Hollywood Reporter, the Star streaming bundle includes a larger library of content from Disney Television Studios, FX, 20th Century Studios, 20th Television and Touchstone, boosting Disney Plus content offering in key Asia markets, such as Japan.

While there’s been no specific confirmation or date regarding the availability of Disney Plus in the Philippines, the streaming service’s updated local website and expansion into the Asia Pacific region could signal that Disney Plus could be coming to our home country as well.

The website for Disney Plus Philippines no longer explicitly says that the service is not yet available in the region.

Previously, when trying to access the streaming service's website, the page displayed the message “Sorry, Disney+ is not available in your country.” Now, the site has a "Keep Me Updated" notice instead.

The tab now asks for an email address where Disney Plus can send you a notification on updates, special offers and other information, complete with a Privacy Policy for the Philippines. 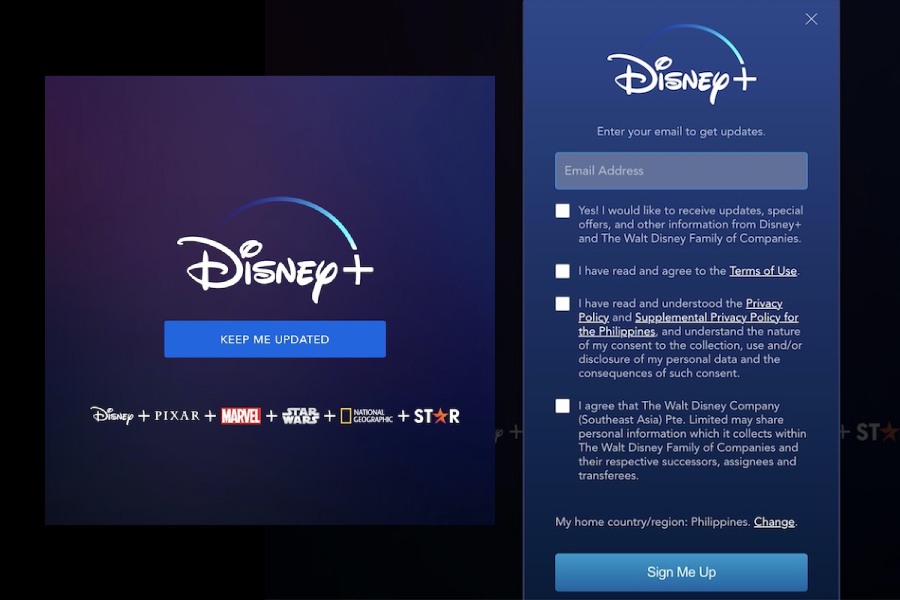 Let's keep our fingers crossed that we can soon watch shows like WandaVision, Loki, The Mandalorian along with the new Asia Pacific content in the near future.