Style Living Self Celebrity Geeky News and Views
In the Paper BrandedUp Hello! Create with us
QCinemaMina Lampitoc

The QCinema International Film Festival is back on its 10th year with a slew of films from all over the world for cinephiles to look forward to.

The festival, slated from November 17 - 26, 2022, will feature 58 films, including six short film production grantees, with seven sections of full-length films and three shorts programs. The festival this year, dubbed in10City, will employ a hybrid setup with screenings in select cinemas in Quezon City and Makati as well as online.

Bookending the festival, is the much-awaited screening of two acclaimed European films with notable performances by Filipino thespians, which were revealed in a press conference Thursday, Nov. 3.

'Triangle of Sadness' is coming to Philippine cinemas this November

The Palme d’Or-winning class satire Triangle of Sadness by Ruben Östlund, which stars Dolly de Leon, is the festival’s opener (by invitation).

The satirical black comedy follows an influencer couple Carl (The King’s Man’s Harris Dickinson) and Yaya (the late Charlbi Dean) who are invited to join a luxury cruise for the ultra-rich. 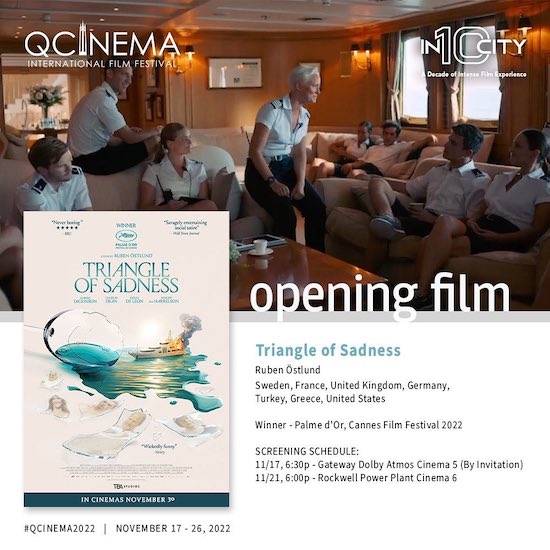 Based on a true story, the film features Joel, a religious Filipino sailor, who discovers Dumitru, a Romanian stowaway hidden between some containers during a transatlantic ship's voyage. If he is spotted by the Taiwanese officers running the vessel, Dumitru risks being thrown overboard. Joel decides to hide him, as a sign of his gratitude towards God. Soon, a dangerous cat and mouse game begins. 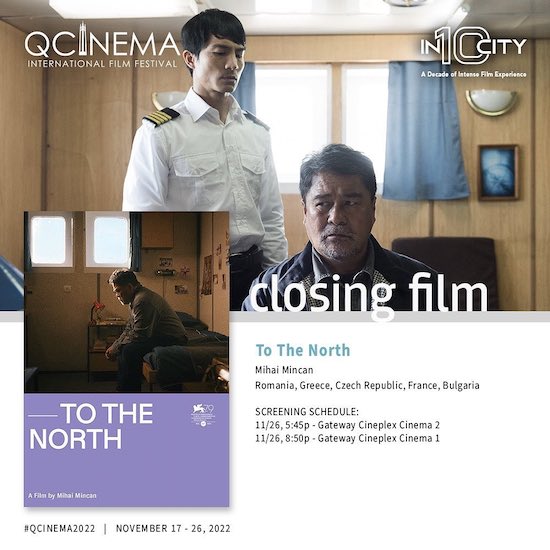 QCinema’s main competition section, Asian Next Wave, which focuses on emerging filmmakers from Southeast Asia and East Asia with less than three features, has returned with seven entries including two competing Filipino titles. The main competition makes its much-awaited return in time for the festival's10th edition, after a two year hiatus.

Elehiya by Loy Arcenas, which showcases the late iconic actress Cherie Gil in her last screen performance, is making its world premiere at QCinema 2022.

Speaking with media on the sidelines of the press conference, the award-winning director who helmed the 2017 Philippine musical film Ang Larawan (The Portrait) said they were not aware that it would be Gil's last film when they finished shooting in 2018. He said he loved working with the late actress on the set, and that the poignant film is certainly "one of Gil’s best performances."

Originally titled as Mirador, Elehiya chronicles the downward spiral of  Dr. Celine de Miranda (played by Gil), as she tries to piece together the shattered remains of a childless marriage.

“Death leaves behind many unanswered questions, some beautiful and some painful. I will always treasure the zest that Cherie poured into her life and art. She is stunning in the film and Elehiya will be her exquisite swan song,” said Arcenas.

Another Filipino title to look forward to is 12 Weeks by Anna Isabelle Matutina starring Max Eigenmann, which won the NETPAC Award in the recent Cinemalaya 2022. 12 Weeks is a coming-of-age film about Alice, a humanitarian worker in her 40s who discovers she is pregnant, just right after she has broken up with her much-younger boyfriend. The role bagged a Best Actress award for Eigenmann, who dedicated the win to her aunt Cherie Gil. 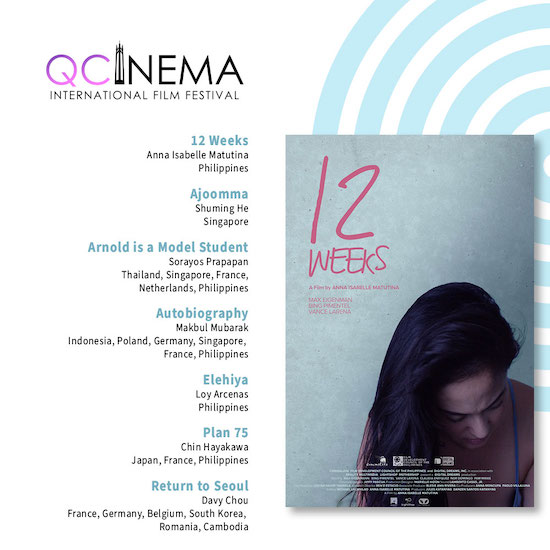 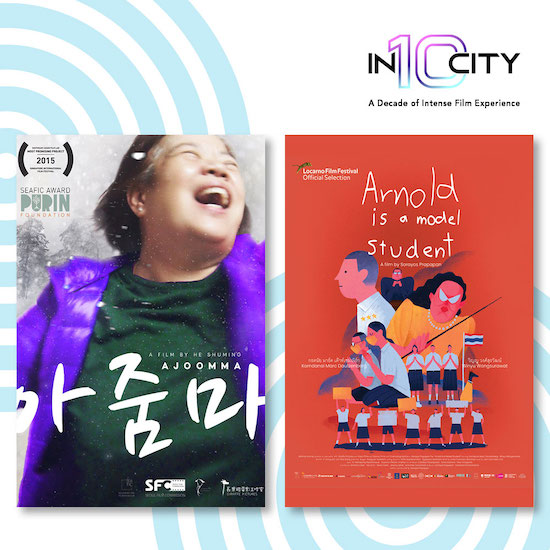 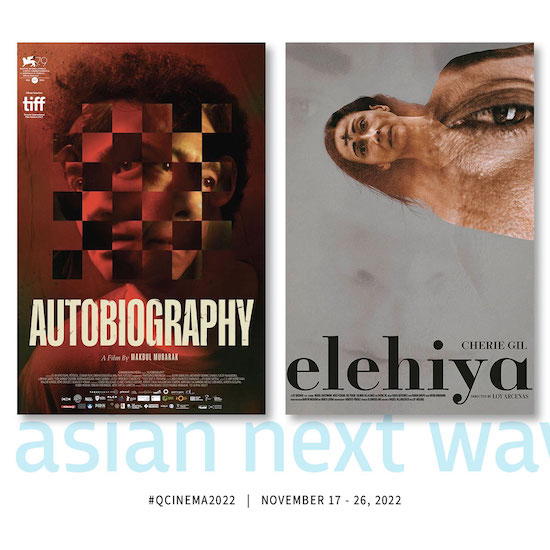 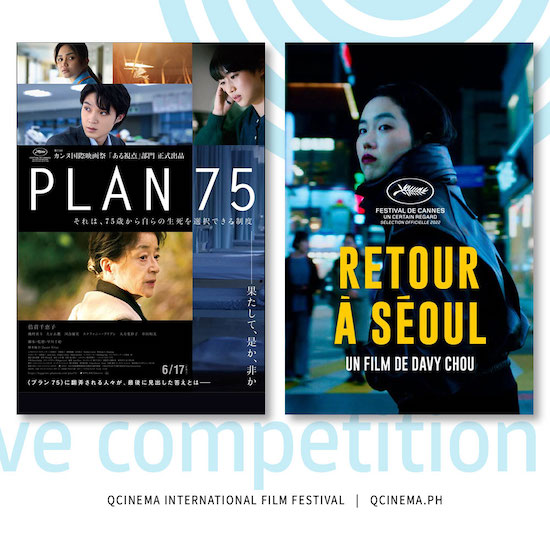 Other films under the Asian Wave category include:

Six films competing in the QCinema short films section this year received production grants of P350,000 each. These films are:

The winners for the long and short film competition will be announced on the Awards night on November 23, 2022.

As a treat for lovers of genre and fantasy movies, QCinema is relaunching its Midnight Series section, the late-night festival screenings, with three chilling titles, including one which stars Filipina actress Chai Fonacier, with themes of traditional folk healing. 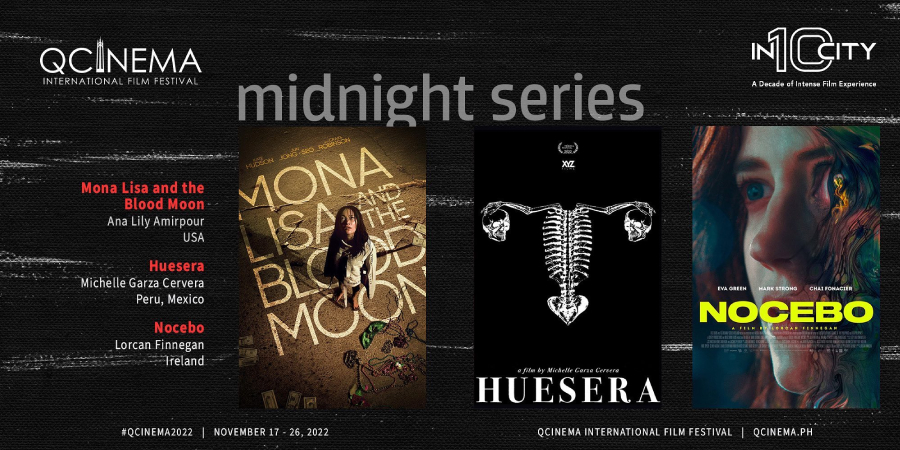 A new festival section that offers a first-look at exciting coming attractions is also being launched this year in partnership with Amazon Prime and Warner Brothers.

The Asian Shorts program, a curated program of must-see shorts in their regional premieres, also return this year to QCinema. 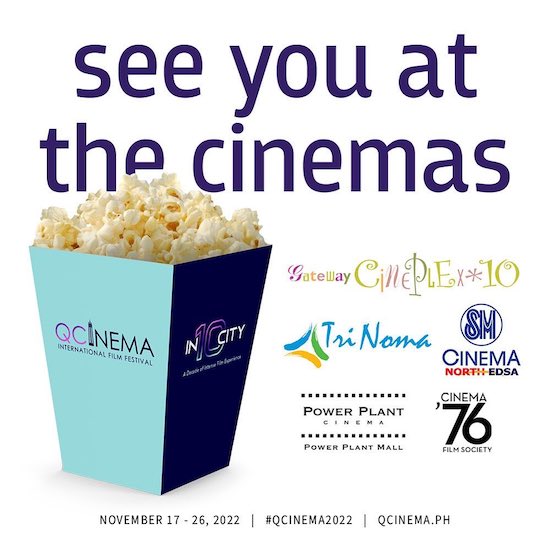 Where to watch online

The film festival is employing a hybrid set-up this year, with online screening for QCShorts 2022, QCShorts 2021 and RainbowQC Shorts to be done in partnership with VivaMax. The online run will be held from November 22 – 26, 2022. Tickets will be P299 for each bundle of films.