Like many new creatures on earth, Klara likes to bask in the sun. We meet her, in the opening pages of Kazuo Ishiguro’s latest novel, Klara and the Sun, enjoying a temporary spot inside a large city department store where she can track the sun’s movement and feel its warmth through much of the day.

If we were there at the right time, we would see the Sun on his journey, crossing between the building tops from our side over to the RPO Building side. When I was lucky enough to see him like that, I’d lean my face forward to take in as much nourishment as I could... After a minute or two, we’d have to return to our positions, and when we were new, we used to worry that, because we couldn’t see the Sun from mid-store, we’d grow weaker and weaker.

Klara is an AF, a synthetic Artificial Friend, and our narrator for Ishiguro’s first novel in nearly a decade. She relies on solar power to function, and hopes to be purchased from the store and brought to live inside a house. Klara yearns to be selected by a young girl roughly her size, to become her companion, like a living android doll.

We soon meet Josie, a young teen girl who spots Klara, finds her special, and pleads for her mother to take her home, even though she’s an older model — a B2, not a more advanced B3.

What follows is a moving tale of a relationship between a girl and her AF, but also her family and a neighbor’s boy, Rick, whom Josie has been friends with since they were toddlers. Rick is talented (he designs his own drone “birds” that can fly and transmit video), but his social status, like Josie’s, is precarious.

This is a future where those with financial means get “lifted,” genetically and economically, and those who don’t have to make do. Josie is also prone to periods of illness, and part of Klara’s role is to keep her company and warn her mother of any signs that Josie’s becoming sick.

Though written before the pandemic, Ishiguro’s latest reflects a time of AI and global loneliness, a new order (perhaps the “new normal”) that we haven’t fully glimpsed yet, and one which we already have: isolated teens forced into distance learning with online tutors.

Told in simple, clear language (Klara’s first-person narration is always simple, almost naïve, yet with an underlying layer of poetic reflection), Klara and the Sun reflects the inner world of a creation that is part logic and careful engineering, and part instinct and spiritual yearning. (Shades of Steven Spielberg’s A.I.)

The sun worship is key to Klara’s worldview; she sees it as a life force, almost like a god. Naturally, she believes all good things come from it. We later learn that some believe Klara and her kind possess “AF superstition,” a kind of magical thinking. 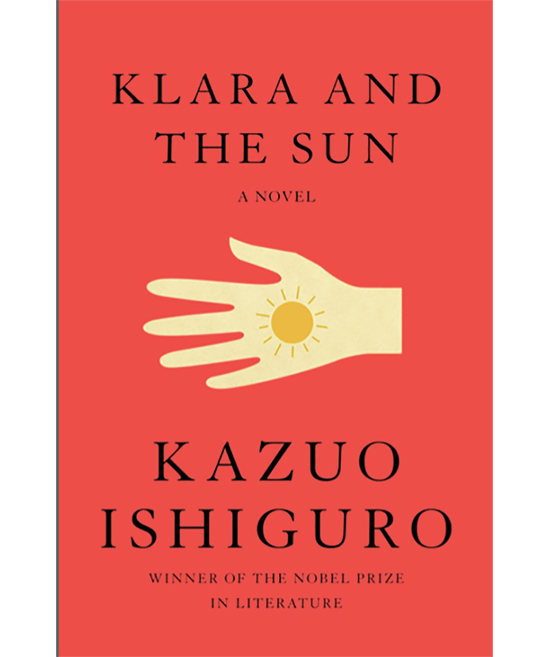 Klara might be Ishiguro’s most affecting narrator since Stevens, the butler in The Remains of the Day, or Kathy H. in Never Let Me Go. So many of Ishiguro’s narrators are servants of some kind, always on the “outside,” overhearing and narrating events of those “higher up,” functioning amid the undercurrents of class structure.

The Remains of the Day dealt with a faithful butler during WWII, and Never Let Me Go tapped into science fiction: a chilling idea of social order based on cloning and replacement human parts. Both novels set reader heartbreak levels to “Stun.”

Now comes Klara and the Sun, which, in many ways, is equally stunning. Though written before the pandemic, Ishiguro’s latest reflects a time of AI and global loneliness, a new order (perhaps the “new normal”) that we haven’t fully glimpsed yet, and one which we already have: isolated teens forced into distance learning with online tutors.

While Klara, from the opening pages, reveals a deep connection with the sun’s warmth and energy, there are others who insist that AFs are mere machines; nothing magical about them. Likewise some, like the artist Capaldi, believe humans are reducible to basic elements and processes: “Our generation still carry the old feelings,” he tells Josie’s mother. “A part of us refuses to let go. The part that wants to keep believing there’s something unreachable inside each of us. Something that can’t be transferred.”

Even with moments of stunning beauty, there’s an eerie backdrop: a dystopian world that could plausibly exist in our future, even more so with the isolation and changes taking place since the pandemic. Like Klara, you may experience a sense of overpowering dread.

Klara is a remarkably sympathetic character, synthetic or not. Ishiguro told NPR’s Terry Gross that Klara has a “childlike faith in something good and protective in the world,” which is perhaps why she makes such a relatable narrator. The author points out it’s not strange that readers would connect with an android character; after all, we “make that leap” and engage with artificially made “characters” whenever we pick up a novel.

But Klara is also given to metaphorical imagery, and what sometimes seems like mysticism. Josie and Rick live in a rural area, and when Klara spots a bull in a field — something she’d never seen before — it fills her with dread.

I’d never before seen anything that gave, all at once, so many signals of anger and the wish to destroy… At that moment it felt to me some great error had been made that the creature should be allowed to stand in the Sun’s pattern at all… Its presence on the grass could only have awful consequences.

Motifs recur in Klara and the Sun. The act of being suspended — whether it’s an “artwork” suspended from cables in a studio that Klara gazes upon, or a painting Klara spies in McBain’s barn, one of sheep in a field of grass, somehow levitating too high above to graze upon it — plays a part. We, too, are in suspense while reading this brief, haunting novel.

But even with moments of stunning beauty, there’s an eerie backdrop: a dystopian world that could plausibly exist in our future, even more so with the isolation and changes taking place since the pandemic. Like Klara, you may experience a sense of overpowering dread.

Maybe lockdown is making us crave some kind of parable for our unusual times. A parable of awe, mystery and hope just might be of service.