It’s like teaching your lola how to use Twitter and—damn!—she’s better at throwing shade than you will ever be. At famous people. People you follow. And she’s just casually putting them in their place.

Legendary singer Dionne Warwick, 80, has recently been very active on Twitter and judging by the people she’s called out for various reasons, she’s enjoying speaking her mind about everything, including musicians with “The” in their names, and those that state the obvious. She also displays a self-deprecating humor for her own typos (nope, she’s not correcting them), and she’s scolding you for your laziness to google her.

Warwick’s half-a-century career has produced hits that include I Say A Little Prayer, That’s What Friends Are For, Walk On By, Alfie. The first song was released in 1967 and enjoyed a resurgence in 1997 with the romcom My Best Friend’s Wedding, starring Julia Roberts, Cameron Diaz, Rupert Everett and Dermont Mulroney.

Warwick joined Twitter in 2012, and it is the singer herself and her social team that run the account. Her early posts, though, were what you would expect of a music legend—mostly about her records, nostalgia—you don’t exactly expect a grandmother to nitpick on people’s names.

Lately, she’s been very caustic—earning her the nickname Twitter’s Queen of Clap Backs. That doesn’t stop young fans from having fun with her though. One asked her to buy him a PS5 (she said no).

On Dec. 6, she tweeted at Chance the Rapper, “If you are very obviously a rapper why did you put it in your stage name? I cannot stop thinking about this.”

Instead of being offended, Grammy-winner Chancelor Johnathan Bennett replied, “Sorry I’m still freaking out that u know who I am. This is amazing!”

She graciously responded, “Of course I know you. You’re THE rapper. Let’s rap together. I’ll message you.”

But she wasn’t finished yet. She tweeted, “I am now Dionne The Singer.” 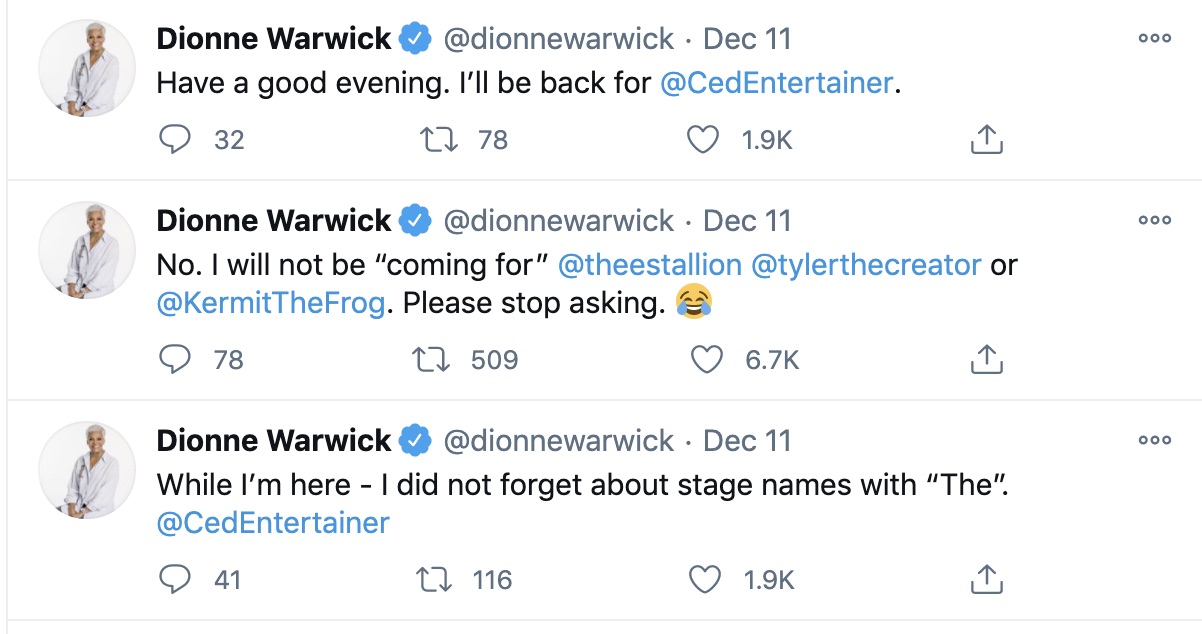 On the same day she said, “If you have ‘The’ in your name, I’m coming for you. I need answers today.”

Of course she had to tweet singer and record producer The Weeknd, whose real name is Abel Makkonen Tesfaye. “The Weeknd is next. Why? It’s not even spelled correctly?”

Speaking of Chance the Rapper, he guested yesterday, Dec. 15, on Stephen Colbert’s The Late Show and said, “We’re working, apparently, on a song. It’s a huge, immense honor. She shouted me out on Twitter, and I freaked out for a while, and I hit her back, and then she started contacting me in real life. It’s all been a blur. It feels like my first taste of real fame. I went to Starbucks the other day and they were like, ‘Are you the guy that was tweeted by Dionne Warwick?’ I’m like, ‘It’s me!’”

When you’re a diva with 56 of your singles routinely hitting Billboard’s Hot 100 Charts from the 1950s to the 1990s—yeah, even famous people would swoon at your putdowns.

And she’s enjoying it! She knows, for instance, that she is in five million Spotify playlists, but she’s “not reading them all.” (That’s five million!)

She once said of tweets that tag her and reference her famous songs, “The amount of ‘Walk On By’ puns in my replies have completely outnumbered those asking me if I know the way to San Jose...Which I do. Thank you for asking.”

I don’t know about “professional”, but I’m certainly having a ball. ??? https://t.co/VhMPli6cmM