Style Living Self Celebrity Geeky News and Views
In the Paper Shop Hello! Create with us
Larry Alcala & Rob Cham for San Miguel

Are you a fan of Pinoy pop culture cartoons and beer?

You might want to visit the nearest convenience store because San Miguel just released a Pale Pilsen limited edition beer can featuring the work of two award-winning Filipino cartoonists.

Larry Alcala (August 18, 1926 – June 24, 2002) was a well-known editorial cartoonist and illustrator in the Philippines who was posthumously conferred the National Artist for Visual Arts title and the Grand Collar of the Order of National Artists in 2018.

Alcala’s most famous cartoon series was the "Slice of Life," which reflected many unique aspects of everyday life in the Philippines. He captured the interest of his weekend readers by hiding his own image cleverly within the weekend cartoon strips.

Preceding Where’s Waldo, for the first issue of Weekend Magazine of Daily Express in April 1980, the cartoonist would conceal his face within cartoons. “Slice of Life” went on to appear in various newspapers including Sunday Tribune (1986-1987), Sunday Times (1987-1995) and The Philippine STAR (1995-2002).

According to his official website, Alcala was tapped several times to make versions of his "Slice of Life" cartoons for a vast array of advertising campaigns, which ranged from corporate calendars to print ads, to promotional t-shirts as well as San Miguel Beer cans in the past.

In 1988, "Slice of Life" was awarded the Best in Humor Award "for helping to keep alive the Filipino's ability to laugh at himself, through the lively marriage of art and humor, and through commentaries that are at once critical and compassionate, evoking laughter and reflection.”

Browse through Larry Alcala's classic cartoons in the gallery on his site here. 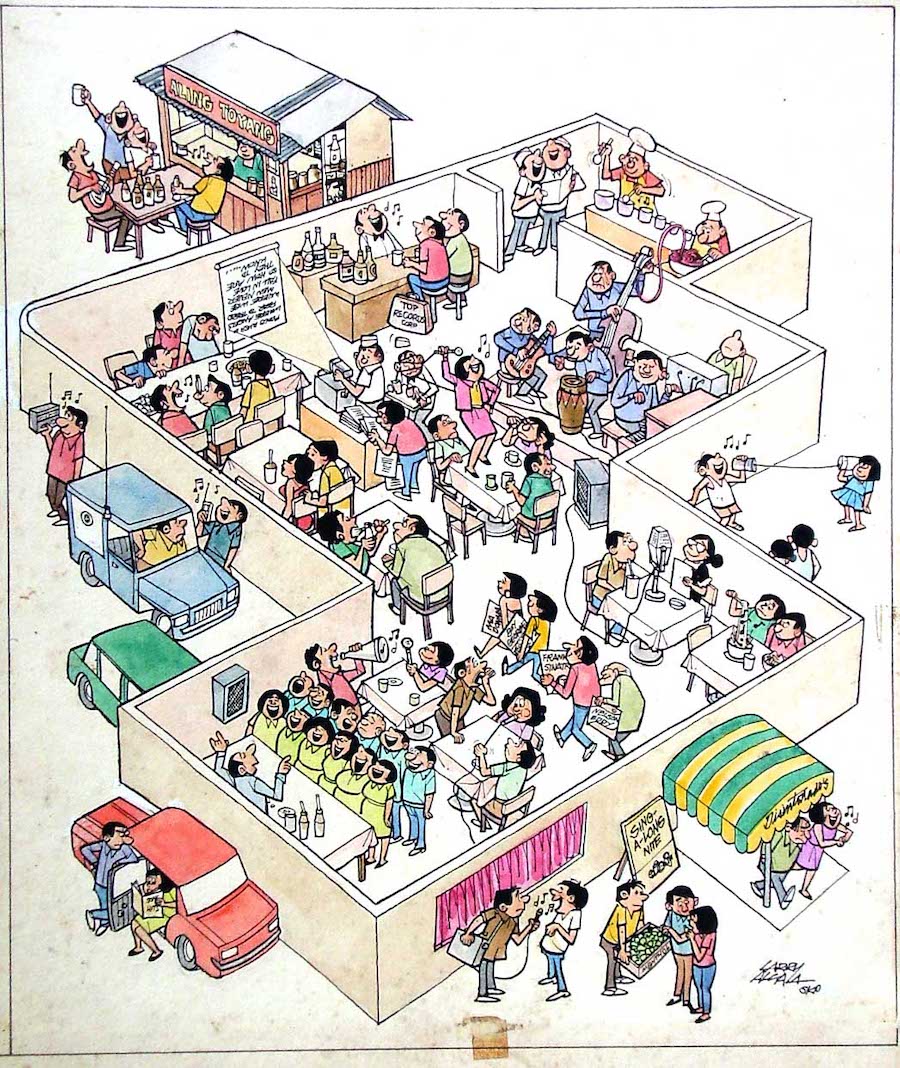 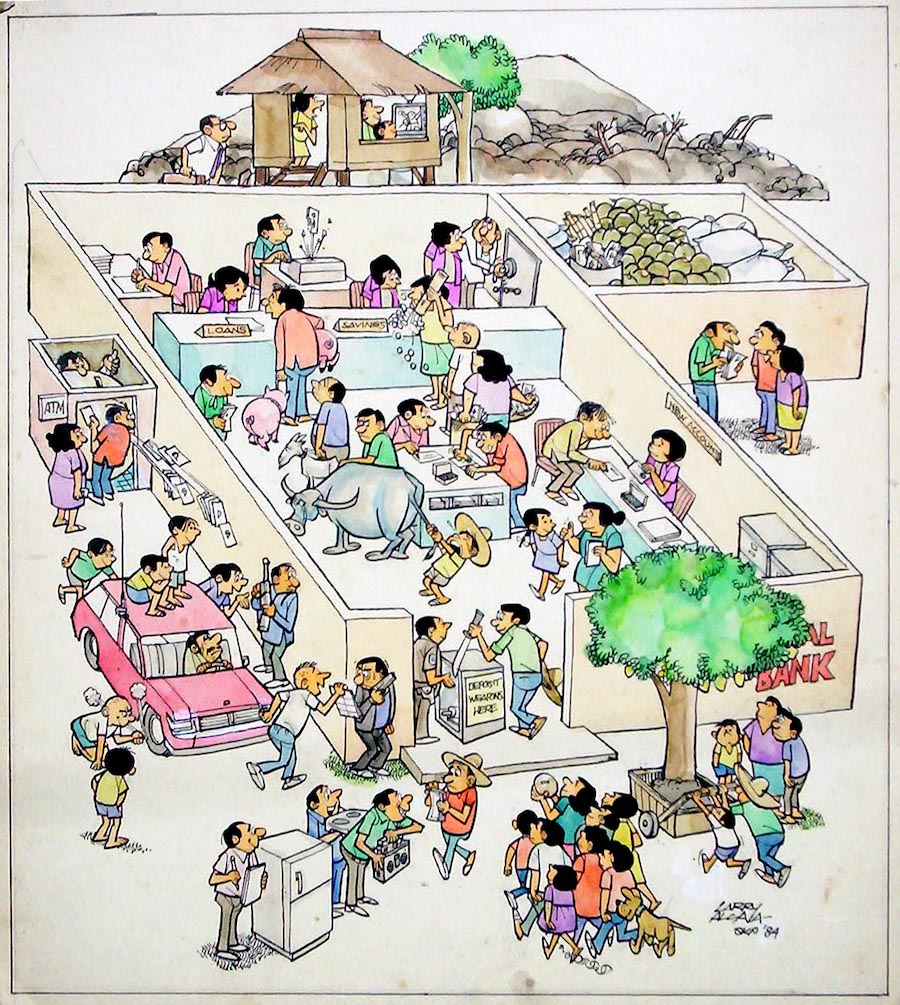 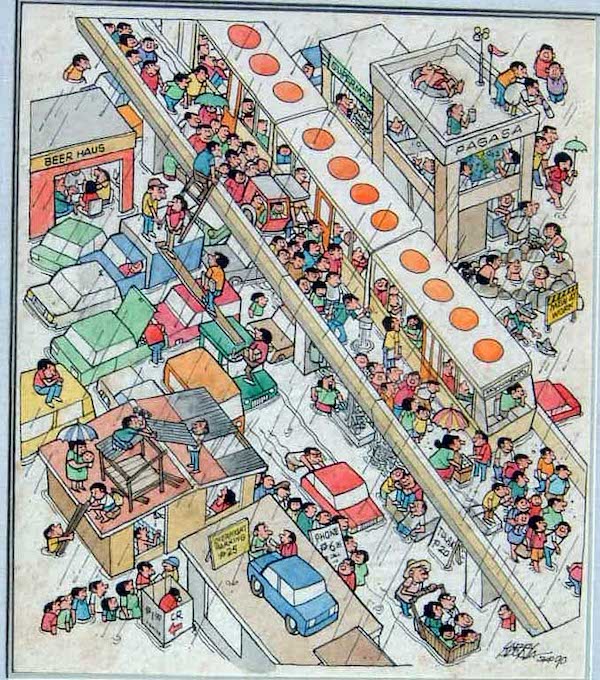 Cham shared how the creative beer collaboration came about in an interview with PhilSTAR L!fe.

“At first it all started when I was brought on to do art direction for a Red Horse campaign. San Miguel liked my work and had me meet with them. The people in charge of Pale Pilsen really enjoyed my work and we got along that we worked on different projects together for their mercandise and marketing,” said Cham.

The beer brand also collaborated with Cham to design beermats for the Wanderland Festival in 2019, which involved a recursive pattern for different products they could use.

According to the artist, the design was originally for a different project at the start, where they were working on 130th anniversary merchandise for Pale Pilsen, and he had the idea to do more of what he did for them in Wanderland.

If you're at Wanderland today, did some work for Pale Pilsen where they're giving away mats with my design, did something new where I made a pattern that repeats of people falling mid air pic.twitter.com/mhWAZsYMEZ

“I pitched the idea based on their tagline 'Kahit Kailan. Walang Iwanan' where it was different generations of Filipinos and how we've all shared a drink and such, so I referenced old magazines and history books and tried to be inclusive of Filipinos from all walks of life from now and back then.”

The can features characters from different eras including a frontliner in a facemask, apt for today's pandemic times.

According to Cham, the San Miguel team liked it so much that they wanted to include it as a can.

“One of the higher ups kind of saw how I was also a komikero and how my artwork reminded them of Larry Alcala. They had the idea to pair us up to kind of reinforce the idea of different generations coming together over beer,” explained Cham.

While the project was delayed because of the pandemic, the limited edition beer can was finally released on Tuesday (Oct. 19).

"I'm on a can and it's weird and exciting and fascinating. I'm honored to be paired up with someone so legendary like Larry Alcala, he's an amazing artist I look up to and it's still surreal to me,” he added.