One week before the 2021 edition of WWE Money in the Bank, former two-time WWE Champion Drew McIntyre sat down to talk with Philstar L!fe to discuss his wrestling career.

When you think of WWE comebacks, few are more impressive than the return of Drew McIntyre. Despite winning the Intercontinental Championship and WWE Tag Team Championship early in his career, it didn’t take long for Drew to get lost in the shuffle before getting released in 2014. Rather than mope over what could have been, Drew ended up working harder than ever, winning championships and putting on must-see matches in various promotions before he came back to WWE.

Needless to say, McIntyre knows how it feels like to be released from WWE and the struggles that come with it. Recently, WWE released a good portion of its roster, supposedly due to budget cuts, and the former WWE World Heavyweight Champion gave some sound advice to the talent that was let go.

“When the releases happened it was a sad time. We’re gonna miss seeing a lot of our superstars regularly every week on television, but at the same time it is a huge opportunity and that’s the way I look at it. Perhaps some of the superstars that were released weren’t particularly happy with their position and now they have an opportunity to go out there and reinvent themselves. The world is opening back up, the wrestling scene was thriving and will be thriving again very soon with live fans back in the building all across the world and they’ll get the chance to go out there and try something different, ‘learn a new hold’ as we like to say in the wrestling industry and really make their own name, create their own buzz.” 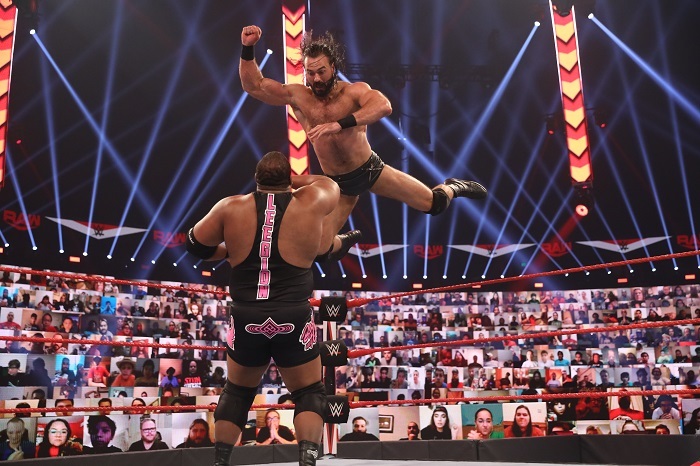 Upon his release, Drew quickly impressed fans with his new work ethic, putting on quality matches and winning various championships in promotions like EVOLVE and Impact Wrestling. This is where fans saw him reinvent himself as a workhorse wrestler who could wow audiences around the world, whether he was throwing dudes across the ring with belly-to-belly suplexes or hurling himself over the top rope to take out multiple opponents. It’s clear that this wrestler wasn’t the same person who was dubbed “The Chosen One” way back in 2010.

“I was so fortunate that when I was released from WWE that’s exactly where my mindset was: I’m going to reinvent myself, I’m gonna put the image out of what I see myself as opposed to what somebody else sees me as and it thankfully caught on. I was given a lot of opportunities outside of WWE to make my name and it brought me back to WWE, brought me back to the top of the mountain of WWE, and there’s so many talented individuals that just got released that can do exactly the same and I know they’ve got the work ethic and the passion and I know I’ll see them again one day.”

Upon his return to WWE, he made a brief stop at NXT where he won the NXT Championship from Bobby Roode and defended it against the likes of Roderick Strong and Adam Cole. After suffering an injury when he dropped the NXT Championship to Andrade, Drew was called up to the main roster as Dolph Ziggler’s tag team partner before eventually breaking out on his own.

Things really started picking up for Drew during the 2020 Royal Rumble, where he shocked the world by eliminating Brock Lesnar with his signature Claymore kick. It was a star-making scene for many fans watching, and Drew talked up how the moment felt to him.

“When it comes to dealing with Brock, he’s not a man of many words as you can imagine. I feel very fortunate to have had the chance to work with him and be successful in most of our encounters. There’s few people in this industry that can really take you to the next level when you’re working with them and Brock Lesnar is right at the top of that list. I was provided an opportunity and thankfully, thanks to him, and a lot of other people, I was able to deliver on it and I would not be on the path I’m on right now without that Brock feud in front of the crowd when they rallied behind me.” 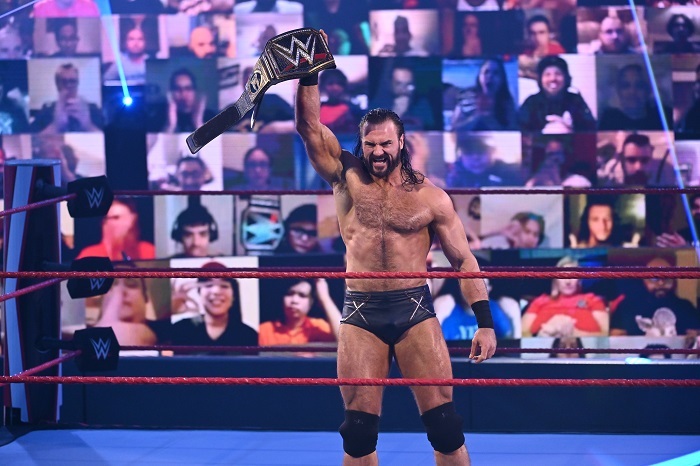 Unfortunately, the COVID-19 pandemic would rear its ugly head two months after his big win, which resulted in WrestleMania 36 not having a crowd. This not only led to Drew beating Brock for the WWE Championship without a crowd, but also having his whole title reign take place in an empty arena.

McIntyre admitted that winning the WWE Championship with no crowd in the arena was bittersweet, but he also saw it as an opportunity to step up. Having the WWE Championship meant that Drew was the face of this company and he took it upon himself to try and carry this pressure with him during this difficult period for the world.

“Obviously, in an ideal world, you want those big moments with the crowd and those moments really help make you a superstar. Those were such unique times we were in and when I reached the top of the mountain I figured everything happens for a reason. If you all know about my career, all the ups and downs, being fired from WWE, finding myself, and all the lessons I’d learned, I truly believed it brought me to the point where I was the guy to lead the company during uncharted waters. I had the confidence to do that because I’d been through so much, learned so many lessons, and I didn’t look at this as ‘Oh no, I can’t believe this happened to me’ I looked at it as ‘All right, I’m the leader, I’m gonna set an example, I’m gonna throw things against the wall and see what sticks’ that was my mentality during the whole thing.”

It was and still is a rough period for everybody, and WWE was forced to throw a number of things on the wall to see what would stick, just like Drew said. This resulted in a period in WWE where they threw a number of unique concepts at the fans watching, from cinematic matches like the Boneyard Match and Firefly Fun House Match, to gimmicks like Raw Underground, and NXT stars like Keith Lee getting called up to the main roster. Say what you will about the actual execution but WWE did try doing new things with the product and they’re still doing that today. 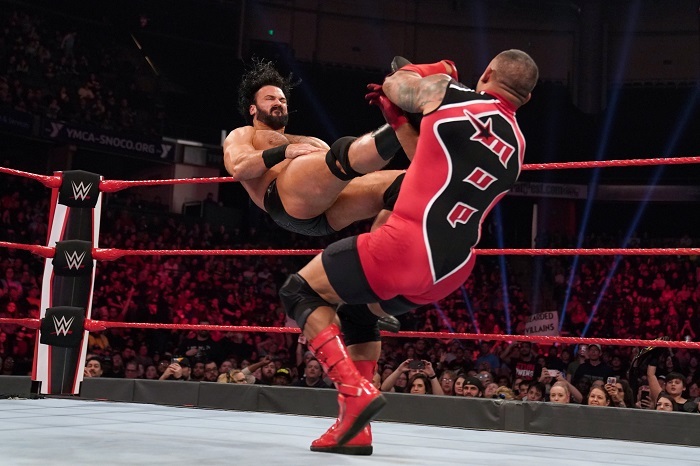 Recently, Drew started to incorporate a Scottish mythos to his character, which has gotten a mixed reception from fans online. When asked about this new wrinkle to his character, he explained how this is a challenge for him to grow as an entertainer rather than a wrestler.

“That’s a new thing we’ve been doing recently. I’ve been challenged, more or less, to show my entertaining side, to try something a little different. Everybody knows how serious I can be, I can be the badass or the guy who wants to be the champion and represent the title the way it should be represented, but we’re a variety show with a lot of big personalities. Some people have challenged me, saying ‘hey teach us about your Scottish history and do it in an entertaining way’ and that’s what I’ve been trying to do. I had a lot of fun this week with the Loch Ness Monster promo with my sword and I was doing voices and a lot of things I’d never done before.”

Despite the mixed reception his character has received as of late, Drew’s willingness to grow as a performer and try new things is why he’s currently one of WWE’s top guys. On July 18, he will be one of the eight men who will be climbing the ladder in hopes to win a title shot of his choice in WWE, which also means he’s going to get hit by a ladder or two.

When I asked Drew how he prepares for dangerous matches like the Money in the Bank ladder match, he gave a very simple answer: you don’t.

“You don’t think about it till the day. Thankfully, this past year, or un-thankfully, however you want to look at it, being WWE Champion for the entire time and fighting for the WWE Championship, I’ve been involved in two Hell in a Cells, TLCs (Tables, Ladders, and Chairs match), hardcore matches... hardcore matches where the other guy could use weapons and I couldn’t use weapons, I’ve been in every match you could possibly imagine. All of those kendo sticks, chairs, and tables hurt a lot more when there’s nobody there and I’ve been getting beat up this past year, especially by Sheamus. We beat the crap out of each other, we should have been arrested for the crimes we committed on each other (laughs).”

Considering how I won the WWE Championship with no fans and won the title again at the ThunderDome, it would suck to not be champion in front of fans after all this time. So, I need to win that match.

As Money in the Bank became the focus, Drew started to reminisce over his first ladder match all the way back in 2010 during WrestleMania 26 when he was still dubbed “The Chosen One.”

“My first ladder match was WrestleMania 26, Money in the Bank, I was the Intercontinental Champion, 24-years-old, and I’d never been in a ladder match before. I remember the first part in the match where I thought ‘oh no this hurts’ was Shelton Benjamin picking up a ladder, locking eyes with me, and I remember thinking ‘he’s gonna throw that ladder at me.’ Sure enough, he threw the ladder at me, I quickly put my forearms up and it hit them. My forearms were black and blue after. At the end of the match I was thrown off the top of the ladder by Matt Hardy and fell like a giant gazel, crotch first, on the top rope”

Moving back to the present, Drew emphasized how important this Sunday’s Money in the Bank ladder match is going to be for him.

“Ladder matches freaking hurt. But it is a match I absolutely have to win or I don’t know how I’ll get back to the top of the mountain. Considering how I won the WWE Championship with no fans and won the title again at the ThunderDome, it would suck to not be champion in front of fans after all this time. So, I need to win that match.”

Is Drew going to win the ladder match and challenge for the WWE Championship or the WWE Universal Championship? Fans will have to find out when Money in the Bank hits the WWE Network on Sunday, July 18 (Monday, July 19 for us in the Philippines). Fans will be able to catch up with Drew’s journey by watching live episodes of Monday Night Raw on TAP Sports, along with live episodes of NXT and NXT UK .